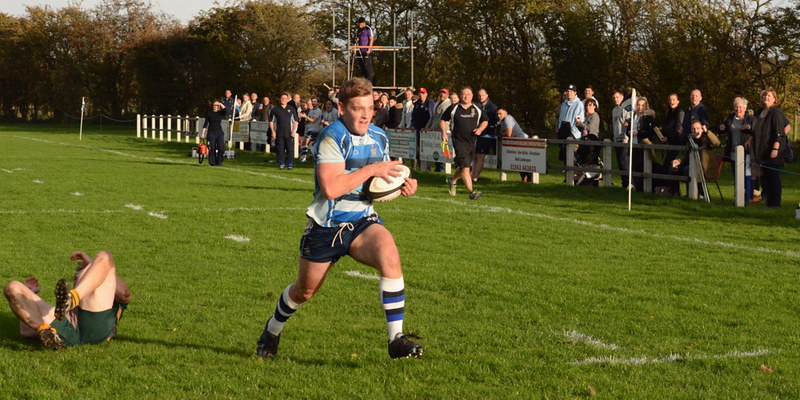 On a lovely warm autumn day with a light westerly breeze Otliensians entered new territory competing in the R.F.U.Junior Vase for the first time as the selected Yorkshire team playing against Wallsend from Newcastle. Unfortunately the visitors brought a weakened team as numerous of their players were unable to travel.

Playing with the wind the home team started at 100 miles an hour and after 1 minute following good lineout ball Connor Bateman scored a try converted by Carl Paterson. The home pack showed their power in the first scrum moving the visitors backwards and after 10 minutes 'Ensians were awarded a penalty and from the ensuing lineout ball gained by Ali Campbell the forwards drove forward for Rob Lofthouse to score a try converted by Carl Paterson. In the next 5 minutes the home team scored 2 more tries the first by Ali Booth with a clever change of angle and the second by Connor Bateman from a fine move across the line; in each case the extras were added by Carl Paterson who was certainly wearing his kicking boots to make the score 28 points to nil.

Straight from the kick off man of the match Matt Taylor made a telling break and a promising move was only thwarted when the final pass went astray. However ,there were only 4 more minutes to wait before a great move by Alex Murphy resulted in a 40 metre sprint by Connor Bateman earning him a 3rd unconverted try. This was followed by a penalty try when the visitors collapsed a scrum and then after 25 minutes a sublime move across the backs gave Connor Bateman yet another try converted by Carl Paterson. (47-nil) From a lineout near the visitor's line Captain Sam Feathersone slipped the ball to Jack Smith who crashed over for an unconverted try and 2 minutes later after 37 minutes Connor Bateman showed his speed to score yet another unconverted try.

Wallsend were striving as well as they could and not giving up despite being outperformed by the home team whose forwards and backs were working together to achieve a fine display of rugby. On the stroke of half time Rob Arbuckle and Jack Smith were instrumental in gaining a scrum 5 metres from the visitors' line .the ball sped across the home backs for Alex Murphy to score the 10th try converted by Carl Paterson, giving a half time score of 64—nil.

The second half opened with Wallsend creating their best attacking period of the match with 'Ensians having to exercise their defensive skills but after 10 minutes a lively move across the backs resulted in a try by Will Prest converted by Will Cooper .The rest of the second half was dominated by the home team with fine forward play complementing superb handling and great open rugby by the backs. Tries followed at regular intervals and the Wallsend cause was disrupted when one of their players was injured.

Tries were scored by Luke Cowdell, Ali Booth, Jack Smith,Ali Campbell (following a 70 metre run by Will Cooper) one of which was converted by Will Cooper and two by Connor Bateman .John Offer brought up the100 points with an unconverted try from a lineout following a penalty kick.

Whilst the home supporters were delighted there was much sympathy and applause for Wallsend who stuck to their tasks manfully and never gave up. The atmosphere in the clubhouse afterwards between the two teams and supporters confirmed this and lived up to the true spirit of rugby.