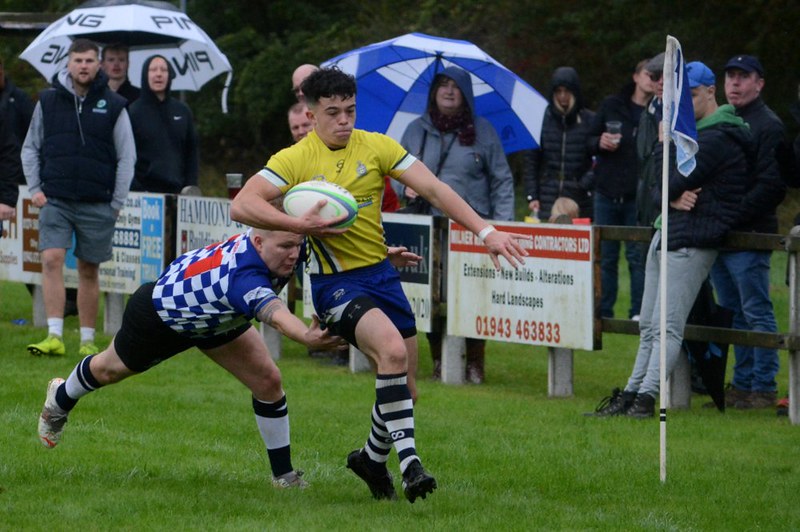 Ensians on their way to scoring their only try of the afternoon
Click the Pic for more match photos.


With so many new names on the team sheet for Saturdays game against Knottingley, I really wasn’t sure what to expect. Whenever Ensians have faced this South Yorkshire side in the past, it’s always been a very physical contest, with Knottingley often showing signs of their rugby league heritage. Quite a daunting prospect for a squad consisting of many young colts. However, from the on set, both myself and many of the club stalwarts, got the feeling we were witnessing the next generation of the 1st XV.

‘Tennis like’ changes of play early into the game kept the supporters focussed. Ensians inside centre, Will Cooper and his opposing stand off, happy to ‘drill’ the ball deep into opposition territory at any opportunity. Knottingley took the first points with a contentious try for their flanker in the left corner. Confused Ensians backs had ceased their defence, awaiting play to stop for a perceived knock on. The referee however, didn’t agree and let play continue, allowing Knottingley to score uncontested. An important lesson to remember from junior rugby; ‘play to the whistle’.

The conversion a little too far for the boot of their fly half.

Ensians soon responded with an easy penalty kick in front of the posts for Cooper, taking the score to 3:5 Throughout the game Knottingley struggled to move the ball past their fly half, who chose to kick more often than not. When they did have the ball in hand, they often relied on their ‘leggy’ number eight to push play forward. Otliensians relying on the excellent tackling of Phil Rhodes, Ross Nicols and the Gilson cousins to hinder their progress.

Half way through the first half Knottingley scored the first of their three ‘deserved’ tries. From a long kick and chase, their number eight gathered the ball and powered over the line, increasing their lead to 3:10.

Later in the half, the visitors were awarded their second contentious score of the game. Just outside their own 22, Ensians defence tried to infiltrate Knottingley’s attacking line. The ball too slippery to gather due to the incessant rain. Sadly the referee deemed this a professional foul, and awarded Knottingley a penalty try. The half time score 3:17

In the second half, Ensians continued to frustrate Knottingley’s attempts to spin the ball down the line with excellent tackling from Joe Tindal and Connor Paley. After several phases of scrappy play in the middle of the field, Knottingley’s winger managed to break free and make good inroads in to Ensians half. Following a stolen line out, Knottingley’s forwards drove towards the home line. Literally putting his body on the line, George Duncan made a ‘crunching’ tackle, stopping his opposing prop in his tracks. Unfortunately the ball was gathered by their second row, and Knottingley scored in the corner. 3:22

From the restart Ensians flanker Harry Gilson showed no signs of fatigue, his individual skill taking play back into Knottingley’s half. Frustratingly Otliensians couldn’t keep possession and before they knew it Knottingley’s fly half had used his powerful boot again to switch the direction of play.

This was the pattern of the game in the second half. ‘Ensians looked the better side, but little mistakes in the final phases of play hampered any serious attacks. Knottingley took another 5 points in the second half to complete their scoring.

With only minutes left of the match, Conor Bateman made an impressive break, drawing two men, before passing wide to Leon Saide. Saide’s opposing winger couldn’t match his pace, and the young Colt scored in the corner, taking the final score to 8:27

On balance the final score really didn’t reflect the closeness of the two teams; Knottingley deserved the win, but only marginally.

With the league table suspended for one season post covid, (meaning no promotions or relegations), Ensians have a great opportunity to hone this young inexperienced side into something exciting for the future.