OORUFC 17 vs 31 Skipton
Rugby back at Chaffers Field 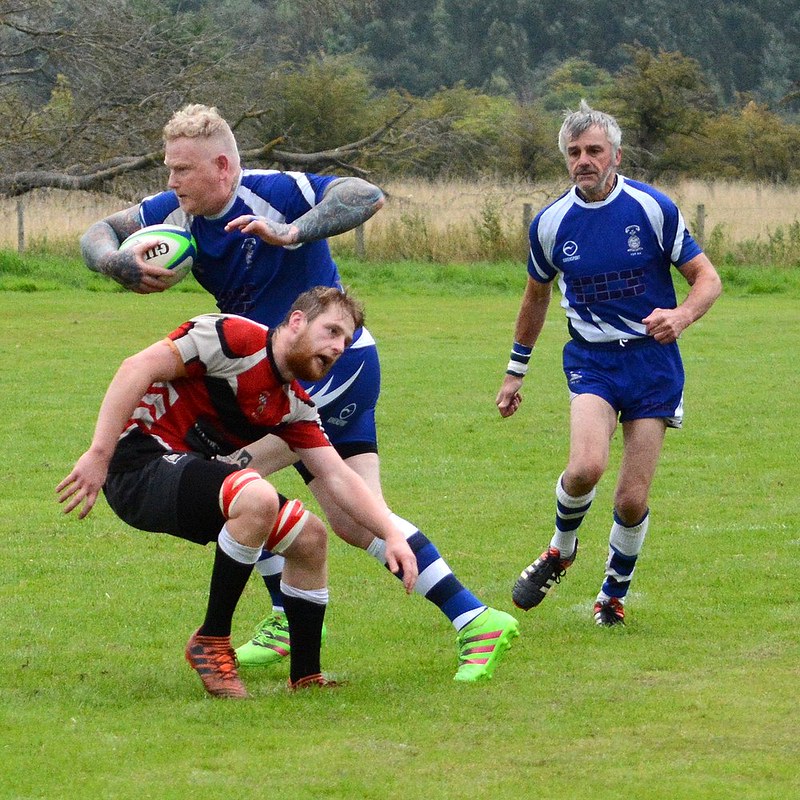 The Tenniswood brothers in action against Skipton.
Click the Pic for more match photos.


Rugby happily returned to Chaffer's Field after 18 months absence on a mild and calm day and a super pitch ideal for the match. 'Ensians were sadly very depleted due to a Stag weekend ,but Director of Rugby Pete Tempest with much effort filled the gaps ,including bringing in brothers Brett and Matt Tennisiwood both of a "certain age".

A big Skipton team soon became encamped in the home 22 despite 'Ensians taking lineout ball against the throw .After 10 minutes of continuous attack by the visitors and despite valiant defence by the blues the reds broke through to score a converted try.

It was a scrappy early season game with numerous handling errors from each side but after a short foray into the visitor's territory ,play returned to the home 22 .The defence was stupendous with Paddy Phipps prominent and a try saving tackle by Conner Bateman after 20 minutes.

However after 30 minutes ,the tide turned a little ,with a breakaway by Phil Rhodes and 4 minutes later scrum half Lewis Exley scored a brilliant individual try from the base of a scrum on half way Harry Bentley converting to even the scores at 7 points each. The red attack resumed and an amazing joint tackle by Will Cayton and Ryan "Macca" saved the day. The defence held and then on the cusp of half time 'Ensians won a penalty on half way. From the ensuing lineout the ball was passed across the backs for winger Matt Peaty to race in to score an unconverted try wide out.This gave 'Ensians a half time lead by 12 points to 7.

The second half started predictably with the visitors spending much time in the home 22.For 10 minutes the defence held but a good move across the Skipton backs resulted in a converted try and then a penalty goal 5 minutes later increased the visitor's lead to 17 points to 12. A few minutes later a strong attack by the blues could arguably have resulted in a penalty try but the ball was lost and the visitors scored a converted try following a hectic chase after a long relieving kick.

Not to be outdone ,the home team battered their way back and 'Ensians man of the match Phil Rhodes crashed over for an unconverted try.

The final score by Skipton came after 35 minutes with a fine move ending with a try in the corner with an excellent conversion.giving them the try bonus point.

In the last 5 minutes the home team continued to battle hard, with Ross Nichols to the fore, but could not make a breakthrough .Also much credit must be given to the home front row of Ray Drake, Paddy Phipps and Will Cayton who strived valiantly against much heavier opposition.

Yes,the better team won but the 'Ensians team put up a great effort and could be justifiably proud of their performance