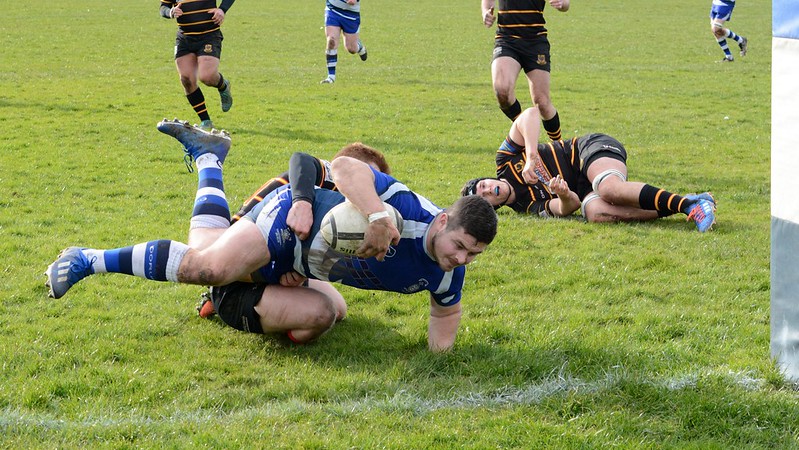 Luke Cowdell scythes through the defence.
Click the Pic for more match photos.


After a number of weeks of enforced lay-off, due to inclement weather, Ensians faced a powerful opponent in Harrogate Pythons (lying only one point above Ensians in the League), in a match which always threatened to be a difficult test for the home side and, with a strengthening wind throughout the game, that certainly proved to be the case.

Kicking off with the wind in their favour, Otliensians forwards soon found themselves tested in the set scrummage by Harrogate’s powerful pack, and it is to their great credit that, despite occasionally struggling to hold their ground, they kept that area of play evenly balanced throughout the match.

The first twenty minutes of the game were marred by the number of penalties conceded by the home side, from which the visitors took nine points, and by what appeared an illegal tackle, which floored stand off, Rob Lofthouse for a lengthy period but which wasn’t penalised.

On the half-hour Ensians went further behind, when Harrogate turned another penalty into an unconverted try, but then the tide turned and the home side began to show why the margin between the two teams was so small. On thirty-five minutes the visitors were pushed back in the scrum and, after a sterling effort by Matthew Peattie, Luke Cowdell (12) scythed his way through the Harrogate defence to score a try under the posts; a try which was converted by Conner Bateman.

That wasn’t the fullback’s last contribution to the score as almost straight from the restart, and after a long clearing kick to touch by Will Cooper (13), the line-out was stolen by Kieran Walker (7) and Bateman finished the move along the backs by scoring a great try which he then converted to level the scores at half-time at 14-14.

The wind in the second half did no favours for the home team, as it strengthened to almost gale force. During the first ten minutes the Otliensians’ forwards drove their opponents up-field where, after a strong drive led by Jay Walsh (4), a penalty kick was awarded to Otley but beaten back by the wind.

Enjoying the wind Harrogate pressed for more points, and it was only through desperate defending by the Ensian’s backs, during which Matthew Peattie was injured, that Harrogate were denied another try. Lewis Exley came on as replacement winger, and was soon fronting-up to a number of the Harrogate forwards.

The continuous pressure on the home team always looked likely to yield a score, but it was unfortunate that one came from what appeared a harsh penalty when, after twenty minutes, Luke Cowdell knocked on whilst endeavouring to intercept a Harrogate pass – the penalty kick proved a formality.

Trailing By only three points, Ensians redoubled their efforts to achieve a home win. Handling errors and the ball being blown off-line at a crucial line-out, diminished the chances of a home victory. Sadly, with only minutes to go Harrogate intercepted a pass on their own 22 metre line and, despite the efforts of the home defence, they scored a run-away converted try, to end the match 14-24 in their favour.