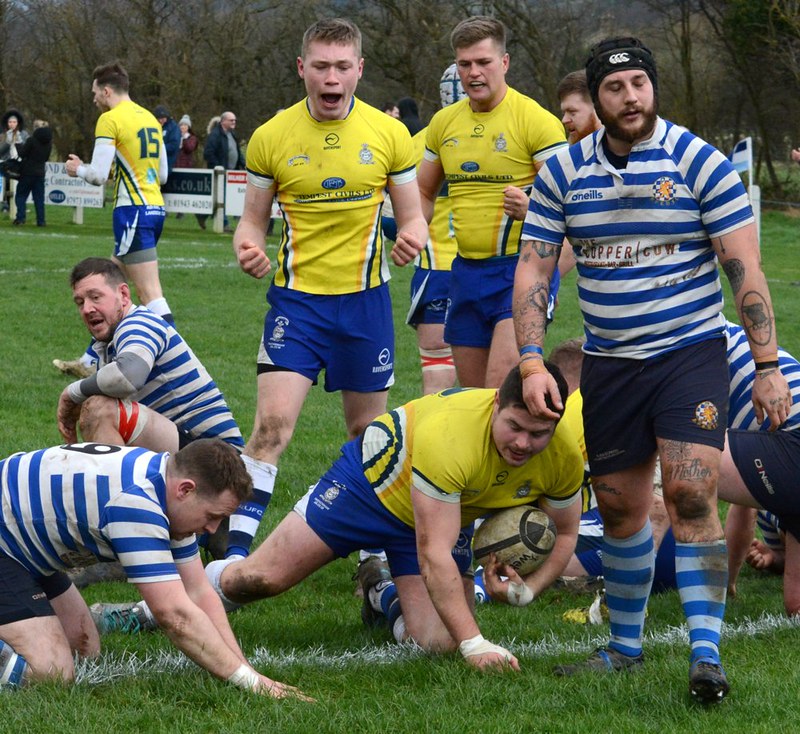 
On a weekend packed with rugby, Old Otliensians took on Halifax Vandals at Chaffers field, for a unique fixture. Due to the tightly packed calendar, there was no time to play both the league and the Yorkshire trophy fixtures, so both teams decided to make Saturdays game count for both. Although fitness had given Ensians the upper hand in their first meeting early in the season, there was only three points separating the teams at the final whistle. Since then the Vandals have been creeping up the table at the heels of Otley.

Otliensians opened the game on full throttle, pinning the tourists in their own half from the onset. The strong easterly wind working in their favour.

Following a clever chip towards the corner from stand off Olly Eaves, Halifax’s forwards gathered the ball and did well to start a drive back up the field. The home sides defences attuned to their intentions, 'wrapped them up' and forced a penalty for not releasing in the tackle. Inside centre, Luke Cowdell to take 3 points from a successful kick.

Minutes later, captain Sam Featherstone took a quick line out, catching Halifax unawares. After touching several pairs of hands the ball ended up with Luke Cowdell twenty metres out. In his usual style he blasted through the full back to score a lovely try left of the posts. Sadly the strong wind made the conversion too tricky. 8:0

It must be mentioned Halifax’s forwards were very strong and well organised and managed to make several drives up the centre of the field. On a smaller pitch I’m sure this tactic would have been more potent. However the generous dimensions down at Chaffers field perfectly suit the home sides game. Minutes after the restart, Will Cooper made a super break up the right wing, supported by winger Joe Tindle. Supporting left wing Nick Hesketh finished off the attack, sliding in at the corner to take the score to 13:0. Again the strong winds frustrated Cowdell’s conversion attempt; the ball striking the right post.

It wasn’t until half way through the first half that the Vandals made any notable in roads into the home sides half. With the benefit of two consecutive penalties, they found them selves in a good position with a line out on the ‘22. Ensians second row Doug Elgar spoiled their intentions, retaking possession. Using the wind again, centre Will Cooper ‘hoofed' the ball downfield. This time the wind worked in Halifax’s favour and carried the ball past the dead ball line. With play brought back to where the clearance kick was taken, Halifax again found themselves in a good attacking position. After several drives forward the Vandals managed to get over to score, despite excellent defence from Micheal Groves and Will Cooper. A successful conversion closed the gap at 13:7 With a deep restart, play was back inside Vandals’ 22. A break through from stand off Eaves and a classic off load in the tackle, to a Cowdell, saw ‘fresh legged’ substitute prop, Rob Lyons in support, to accept a quick pass to score just left of the posts. A much easier conversion this time from Cowdell, increased the lead to 20:7

During the second half the wind decided to look favourably on the home side and dissipate, giving them a slight advantage. The game ebbed and flowed for the next 20 minutes with Halifax’s strong forwards staying competitive.

Half way into the second half Otliensians found themselves in a good attacking position following a scrum on the halfway line. Halifax's scrambling defence were penalised for a high tackle. The referee sensibly playing the penalty advantage, gave Ensians time to ship the ball to Josh Dyson who almost made it over the line. The ball quickly recycled to lock, Ali Campbell, again held back. The vandals defended valiantly but on the third phase the ball found its way to Cowdell who ‘danced’ over the line, just to the left of the posts. A simple conversion gave the inside centre another seven points to his tally. 27:7

A well deserved win for the home side, looking in control from the onset. I wish I could say the same about our National squad!