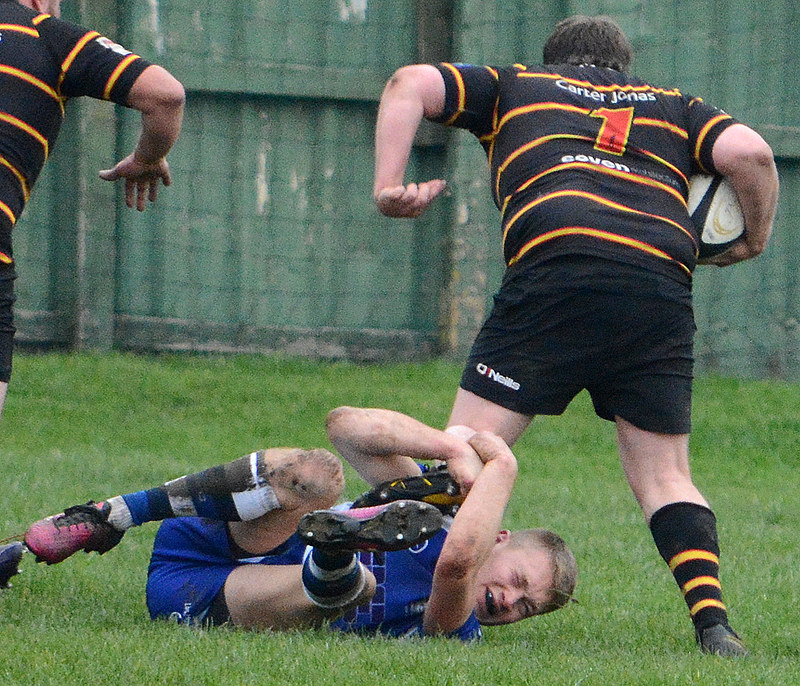 Will Cooper makes a tackle close to Ensians line

A very physical hard fought game but Harrogate remained in control from the start.

Harrogate opened the game on full throttle, pinning Otliensians in their own ’22. Ensians tackled valiantly but on the 6th minute, the home sides powerful flanker crashed through to open the scoring. The conversion unsuccessful, set the scoreboard at 5 nil.

The visitors knew from the tempo, they were in for a very physical contest.

Harrogate eventually penalised for being off side gave Ensians a chance to put some points on the board. A super long range penalty kick, by winger Conner Bateman, took the score to 5:3.

Unfortunately the off side infringements were a common feature for the rest of the game from the home side.

From the restart Harrogate drove back deep into Ensians half. A rolling maul erupting from a powerful scrum, saw the home sides well built prop, barrel over for their second try, just to the right of the posts. A much easier conversion for their winger, took the score to 12:3.

For the rest of the half the visitors were under constant pressure. The few times Ensians had the ball they looked dangerous. On the half hour mark, we saw a glimpse of brilliance from Ensians backs, closing the gap on Harrogate. James Bagnall chipping the ball into space behind his opposing stand off, enabling, inside centre, Oliver Eaves to follow up, gather, and score in the corner. The conversion, too much to ask, left the score at 12:8.

Harrogate's very athletic backs piled on the pressure from the restart, and within minutes their outside centre had sliced through the visitors defences to score near the posts on the 36th minute. A clean conversion saw the scores settle at 19:8 at the halfway mark.

During the second half, Harrogate showed no signs of fatigue, and continued in the same vain as the first half. Their tackling was unyielding and the scrummaging, solid and controlled.

Half way into the second half the home side shipped the ball down the line to their winger, who stepped inside slicing through Ensians defensive line, to score in the corner. 24:8

Ensians worked courageously for the remainder of the game to cease the onslaught and were rewarded with a converted try thanks to Connor Bateman, but Harrogate's merciless pressure saw them increase their lead to 31:15 at full time.

A well deserved win and bonus point for the home side.