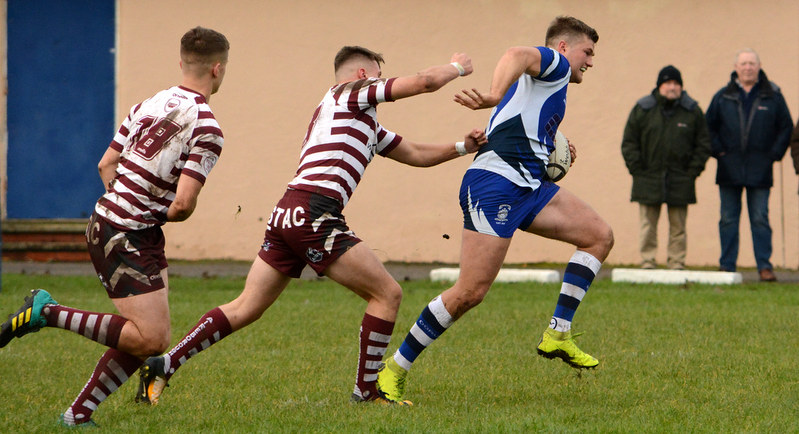 After 24 hours of continuous rain the main pitch was partially waterlogged but the 2nd team pitch was in superb condition. The rain had thankfully stopped and the conditions were cool with just a light drift of wind for the game against bottom of the table Aireborough who were sadly also suffering from injuries.

'Ensians started off at 100 miles an hour with Will Cooper catching a missed clearance and passing to Olly Eaves who made 50 metres deep into the visitors' territory followed by the first unconverted try by winger Rob.Lofthouse after 8 minutes. Three minutes later Doug Elgar gained fine lineout ball and the ensuing drive resulted in a 5 metre scrum from which he scored a try converted by Will Cooper making the score 12 points to nil.

The Visitors came back and for the next 15 minutes were mainly in the home half but the defence held. However 'Ensians were storming and after 25 minutes took the ball against the head in their own half and with quick ball Olly Eaves made the break for Luke Cowdell to burst through to score a try again converted by Will Cooper.

The home team were on fire and scored two more tries before half time, one converted by Will Cooper. The first was when Will Cooper himself collected a kick ahead 40 metres out and cut through the defence to score. The second came from a quick strike from a scrum by the posts and a deft move for centre Olly Eaves to dive over making a half time score of 31 points to nil.

'Ensians started the second half where they left off when after one minute the ball was opened out for hooker Paddy P to score an unconverted try. 'Ensians took the ball straight back deep inside the Visitors' 22 due to great lineout ball by Doug Elgar but a well timed interception by Aireborough gave them a converted try when their player won a 90 metre sprint for the line .

Play was mainly in the middle of the pitch with Aire playing hard to keep the deficit down, but after 13 minutes a flowing move from the home half resulted in a maul near the visitor's line and a try from 2nd row Ali Campbell making a welcome comeback. The scrums were working well for 'Ensians as were the lineouts controlled by Dan Ridgway, Doug Elgar and Ali Campbell.

Not to be outdone Aireborough set up a series of attacks pushing the home team into their own 22 and with some neat inter-passing out manoeuvred the home defence to score a converted try making the score 41 points to 14 after 25 minutes.

Although Aireborough never gave up, they tired and in the last 15 minutes 'Ensians played exciting open rugby linking forwards and backs with Paddy Phipps to the fore .They scored four more tries two by Luke Cowdell and two by Rob Lofthouse who each completed hat tricks two of which were converted by Will Cooper to make a final score of 65 points to 14.

It was a fine performance by the home team but credit must be given to the visitors who stuck to their task manfully.