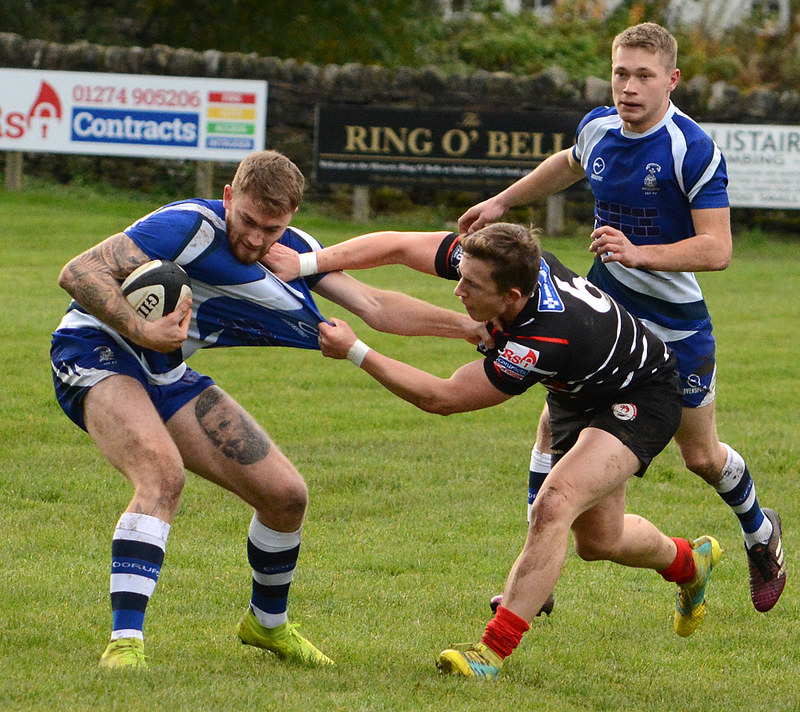 
Otliensians travelled to play against old friends Baildon on a cool but pleasant afternoon with a light breeze down the sloping well grassed pitch .Both teams were near the top of Yorkshire 3 and a close encounter was anticipated.

The visitors took advantage of the slope in the first half and were quickly pressurising the home team in their own 22 .After 6 minutes Connor Bateman scored a penalty goal and four minutes later he increased the lead with a fantastic penalty goal from just INSIDE his own half. 'Ensians were pushing the home scrum backwards and things were looking good when Olly Eaves made a telling break from quick ball from Rob Lofthouse passing to winger Connor Paley who was tackled just short of the line.

However Baildon turned the game around with a penalty goal and after 24 minutes and with the 'Ensians defence in disarray scored a converted try to take the lead 10 points to 6.

Both teams tried to open the ball out but there were numerous basic errors and play was generally scrappy .The lineouts were even with Joe Ridgway prominent for the visitors .Eventually the visitors achieved a number of phases resulting in another penalty for Connor Bateman .Baildon came close when their speedy winger was tackled close to the line and held a 10-9 lead at half time.

The second half started with Baildon moving into the Visitor's 22 led by their back five who were having fine games both in attack and defence .However, on the 17th minute 'Ensians forced their way into the Baildon 22 but good defence held and the visitors had to be satisfied with a penalty by Will Cooper regaining the lead by 12-10.

The away crowd now expected their team to show their skills and seal the match but it was not to be. The Baildon forwards took over in the loose, their defence was firm, and they knew exactly how to use the slope and breeze .When 'Ensians did foray upfield the ball was kicked back “with interest”. Most play took place in the visitors half.

Baildon regained the lead with a penalty goal from their inform goal kicker on the 25th minute but in the last ten minutes the home team took the game "by the scruff of the neck" and scored a converted try a penalty goal and a further unconverted try in that order for a well deserved win the final score being Baildon 28—Old Otliensians 12. John Churchman

With numbers on the 2nd team whats app group low midweek, a big call from alex longstaff & captain brett got people throwing their name in the hat, & by Saturday they had a full team with 2 on the bench with a few late calls, to put a small smile on matty tenniswoods face ! [Or was it trapped wind??]. Ensians games with Baildon are usually good games played in good spirit, & it didn’t disappoint, even though Ensians lost. Baildon arrived with a good squad & 5 games & 5 wins under their belt, while Ensians had 1 game with 1 loss under there’s. With the usual traumas which happen with 2nd team rugby, tempos team sheet had plenty of changes, but with players playing mainly in their preferred positions, all looked positive. With a starting front row of tom twist, wheely bin & eddy booth [big eddies sicker / older brother] with ray [I’ll pay my subs one day] drake on the bench. The tenniswood twins were in the 2nd row, with a backrow of dan the man ridgeway, ben [hit me hard] jones & new start, Royston [Vasey!] bayfield. Alex longstaff put his favourite 9 shirt on again, with late addition & star 10, harry Bentley making a welcome appearance. James [one day I’ll play 8 again] smith, started in the centres with, alex [the shoulders] bayfield at 13. Mark elamb & Jamie Kenworthy were on the wings, with backrower nathon jones playing his first game since school rugby, out of position at 15, due to survival expert mick philpot getting lost.

A great start to the game saw Ensians all over Baildon, with forward & back play, & with matty t running a good line. Wheely drove on & tom twist forced his way over in the corner to shock Baildon, & Ensians were 5 – 0 up with 7 minutes on the clock. From the kickoff, the pack worked hard to add to the score, but eddy booth went down with self-diagnosed broken ribs with rib cartilage damage to end his game, but luckily ray was on hand. harry b at 10 was using james smith & alex bayfield to make the hard yards up the middle, but with no support at times, the ball was turned over & neat hands saw Baildon off down the wing to score in the corner to make it 5 – 5. Ensians pressed from the kickoff, but a loose pass saw Baildon kick on for an easy 7 pointer to make it 5 – 12.

With captain bret & Royston holding their own in the lineouts against a good Baildon tight 5, Ensians had some ball for alex to work with. The pack were working very hard against a well organised Baildon team, with wheely & ben jones running hard into the Baildon defence, with dan ridgeway & Royston in support, but another loose pass saw Baildon score again to make it 17 – 5 at half time. The half time team talk was, stop throwing sh*te & bust a gut to support the runner.

The 2nd half started with Ensians attacking, but when Baildon got the ball, Ensians were caught narrow & they threw it out wide & scored with 5 minutes on the clock to make it 5 – 24. With survival expert phillpot, finding his way from Baildon, nathone jones moved into the back row to give ben jones a breather, & mick slipped the 15 shirt on to give some more fire power to the back line. With mick running hard, Basildon’s defence was tested time & again, with young winger Jamie Kenworthy having a few runs down the touch line, but last-ditch tackles kept him out. A dodgy pass with a boot to the ball to stop a knock on been awarded, gave Baildon a lucky try by the posts to make it 31, before another break by phillpot gave Ensians some front foot ball, with nathone jones in support to edge towards Basildon’s line. From an uncontested scrum, matty went blind & dan ridgeway forced his way over for the last score of the game to make it 12 – 31, with matty converting.

Man of the match for the forwards was part time morris dancer wheelybin, who not only worked hard in carrying the ball, but also clearing out the rucks to keep the ball safe, with Oscar winner eddy booth a close 2nd for lasting 5 minutes ! For the backs, Jamie Kenworthy, who couldn’t catch a cold before kick-off, had a cracker for someone who hasn’t played much rugby, while nathone jones made an impressive start to senior rugby.