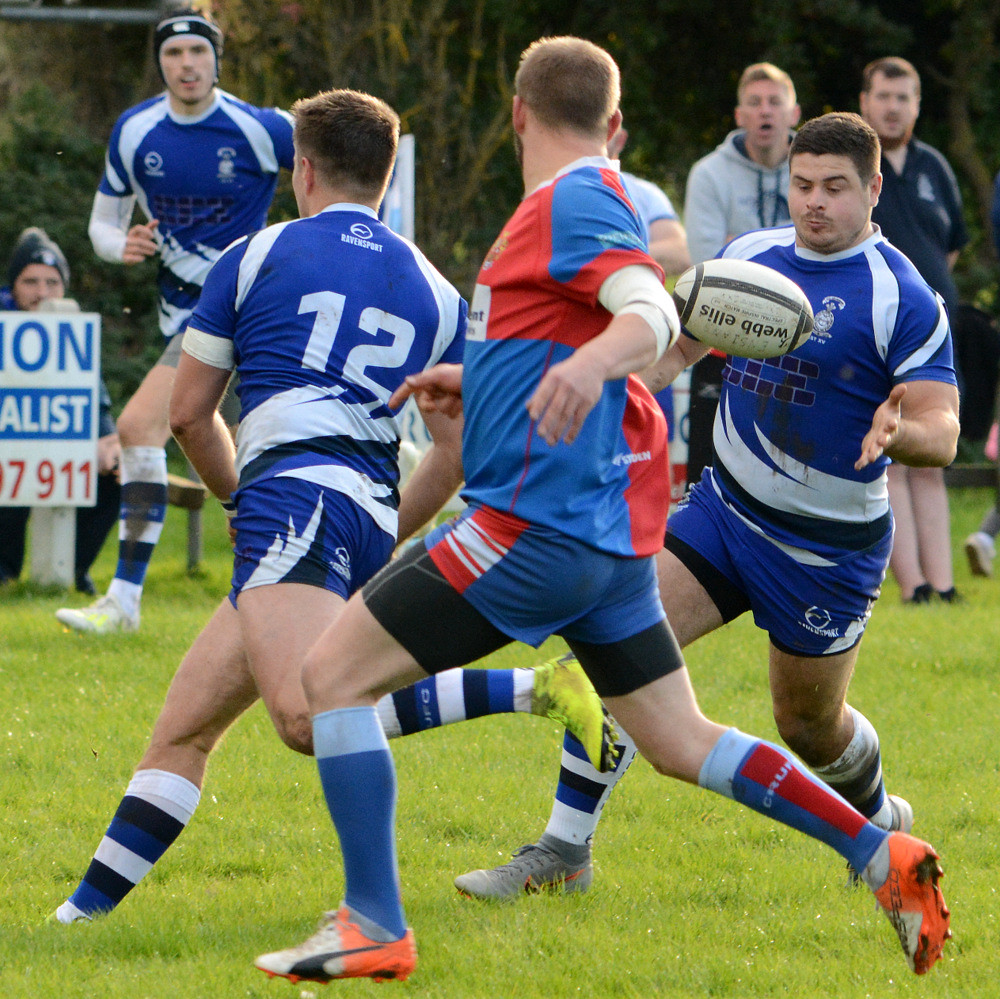 
Conditions were almost perfect for running rugby as Old Otliensians entertained Castleford at Chaffers Field. Ensians welcomed back captain Sam Featherstone as well as Luke Cowdell and Rob Lofthouse. There was also a seasonal debut for Joe Armitage, who started on the bench.

The opening exchanges were littered with mistakes from both sides and the stop start nature of the game was clearly favouring the visitors. In the first 10 minutes Ensians conceded a free kick from a scrum close to their own line. Castleford kept the ball tight and, following a number of drives, crashed over for the opening score and a 7-0 lead.

Mistakes continued to be a feature of the first half and when Ensians were penalised for wheeling a scrum the visitors kicked a penalty to lead 10-0. Immediately from the restart Castleford ran through some weak tackling and their scrum half scored a converted try for a 17-0 lead.

At this point the home side moved up a gear. From the kick off Ryan McIlorum put in a crunching tackle, Dougie Elgar recovered the loose ball and then Olly Eaves broke down the blind side. He found stand off Will Cooper in close support for the number 10 to score under the post. The extras reduced the deficit to 7-17. The home side were now starting to dominate the game and on the half hour mark second row Jay Walsh crashed over. Cooper added an excellent conversion to reduce the arrears to 14-17. Castleford were put under immense pressure for the remainder of the half but held out with some desperate defence.

Otliensians dominated the second half against a visibly tired Castleford team. Joe Armitage was introduced into the game and with less than 10 minutes of the half gone the forward pack kept the ball tight and made 40 metres before captain Sam Featherstone scored under the post. The ensuing kick gave the hosts a 21-17 advantage and the lead for the first time in the game. The home pack were now getting well on top and the backs were carving huge holes in the visitors’ defence.

Midway through the half Otliensians secured a lineout just inside Castleford territory. The ball was moved wide and centre Eaves cut a line between the opposition centres and then passed inside to fellow centre Cowdell, who ran unopposed to score under the post for a bonus point try. The successful conversion gave the home side a comfortable 28-17 lead.

With less than 10 minutes remaining Otliensians were awarded a scrum inside the Castleford 22. Scrum half Rob Lofthouse gathered the ball from the set piece and scampered over for a 5th try. The conversion gave the home side a 35-17 lead. In the last 5 minutes the home backs ran the Castleford defence ragged and scored 2 further long distance tries from Cowdell and full back Connor Bateman. Cooper converted one of the tries to finish with a personal haul of 17 points.

With the 1st team down a few players & a few dropouts, the 2nds arrived atWest Park with 11 players, to get in the first game of the season for the boys. WithWest Park saying it would be uncontested scrums when team sectary beardo confirmed, alarm bells were ringing for team manager tempo, & sure enough it was a team full of leeds students with a couple of West Park lads ! To be fair to their team manager Steve, he lent Ensians very good players to even it up a bit, but the writing was on the wall.

With a front row of chris [ I need a can of speckled hen ] booth, ray [ I don’t pay subs ] drake & backrow ben jones against 3 athletes, it was a miss match, but with no pushing in the scrums, it was inWest Parks favour. Captain for the day brett & liam student were in the second row, with new boy will cayton & ginger ninja dan ridgeway in the back row. alex longstaff moved to his favourite scrum half role, with seasoned journeyman matty tenniswood playing ten. Juggernaut james smith moved from back row to inside centre, with jc student at outside, & james student [ who played 7s for Yorkshire] on the wing. Man of the match joe tindal played full back with resident new Zealander mark elamb completing the team.

With a lot of talk / moaning going on during the warm up [ as usual ], team manager tempo set out a cunning plan to help with the teams phycological wellbeen,by telling them to forget the score line, as once it went out wide wed be knackered & just concentrate on how we play. The second cunning plan was to keep it tight, with james smith trucking it up the centre back towards the pack.

For the first ten minutes it was all Ensians, until a loose pass went to ground, & then leeds university were off, like a swarm of bees, with some fantastic hands & running lines to score, & the first of many points were on the board. With ray having a chat to the ref before, about his throwing at the line outs not been the best & cutting him a bit of slack, the game flowed, but not even George cruise could of caught some of the balls ray threw in, never mind brett!

When Ensians had the ball, alex was using will cayton to make hard yards in the forwards, with ben jones & dan ridgeway, but with the support slow at times, the ball was stripped & gone wide where mark elamb & joe tindals tackling were put to the test, with joe been outstanding at times, with various groups of students running at him. At times it felt like they had 25 players on the park & any mistakes were punished, usually with a try.

James smith was scattering a few of them with his trade mark hard running, but with 1 or 2 knocked to the ground, another 1 or 2 arrived to bring him down. At half time, tempo set them a challenge to look after the ball for enough phases to score a try, & with the forwards [ even chris booth ] working hard, & some good feet by alex longstaff with a neat pass, matty tenniswood scored, & converted, in between leeds students scoring various.

If you forget the score line, it was a game played in great spirit, with 12 or 15 of the students playing for Ensians at some stage, with everyone in one big huddle after the final whistle saying it all.