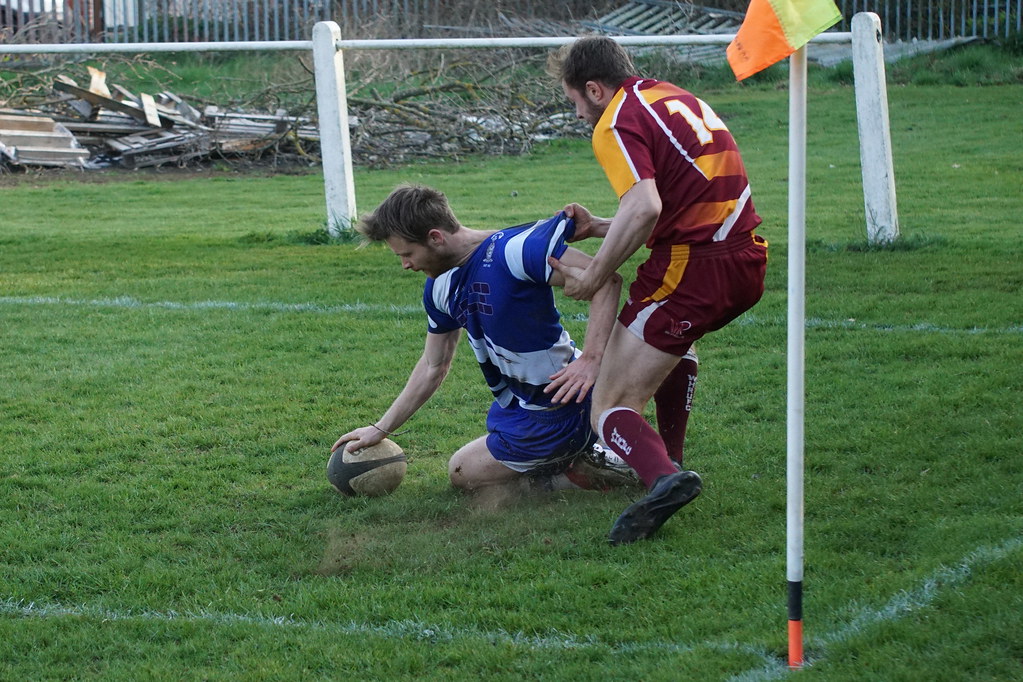 Rob Lofthouse scores in the corner
Photos by John Eaves

The conditions were perfect for a trip south to face 9th place Wheatley Hills. With little wind and the sun high above the pitch, it could be a day for some high balls testing the full backs. ‘Ensians should be feeling positive after a super 2nd half at Wetherby last week, scoring 33 points in the last 40 minutes.

Due to various injuries in the squad, Coach Kris Stafford featured in the opening line-up this week, wearing the number 6 shirt. Joe Armitage sadly still on the bench, recovering from a shoulder injury.

From the onset Wheatley looked a ‘handful’ of a side with a big mobile pack and a decisive scrum half. They dominated the game for the first 10 minutes, keeping the visitors pinned in their own half.

Some nice teamwork between full back Ronan Maloney and winger Matthew Peattie saw ‘Ensians break the home side’s line for the first time, but the local, scrum-capped, outside centre was quick to diffuse any threat. Wheatley’s powerful scrum was something ‘Ensians soon became wary of, but luckily their big forwards were often let down by mistakes from their backs.

The deadlock was nearly broken by Otliensians half way through the first half, with Oliver Eaves chipping through. The oppositions full back did well to gather the ball, only to be well tackled by Eaves chasing up. A scrum on the 5-yard line, won by the visitors (despite being pushed back) resulted in quick ball down the line only to be knocked on yards from the line.

The first 30 mins was a hard fought battle for territory with more 'end to end’ action, frustratingly yielding no scores for either team. A second attempt at the home try line came from a penalty, seeing Will Cooper kick for touch, taking play deep into the home half. With the line out won, Dan Stevens drove forward forming a multi-player rolling maul. Yards from the line, the powerful Wheatley Hills prop managed to steal the ball and quash any hope of ‘Ensians opening the scoring.

Hills constantly on the attack, drove forward, recycling well and were eventually rewarded by a converted try for their scrum half just after the half hour mark, taking the score to 7- 0.

Otliensians found themselves in a similar attacking position following a scrum just inside the visitors half. The scrum broke down, resulting in a penalty to the visitors. Hills not content with the referee's decision, were marched back into their own half for 'back chat'.

Keeping the momentum, Cooper cleared deep into the oppositions 22’. ‘Ensians won the line out and saw Dan Stevens and Sam Featherstone work the ball out to the backs, with no. 11, Connor Paley making crucial yards before off-loading to Luke Cowdell, who burst through on the inside to score just to the left of the posts. Will Cooper’s conversion leveled the score at 7 - 7 at the 38 minute mark.

Unfortunately just before the halfway point, Ollie Eaves left the pitch with a head injury, seeing Rob Lofthouse come on, taking the no. 9 position, moving James Bagnall into the centre.

Following the restart, the match remained a tight contest until the latter quarter, which saw the strength and fitness of the home side’s forwards take advantage. Their big prop wearing the no.19 shirt, powering his way through on the 60th minute, taking the score to 14-7, following their successful conversion.

The home side kept the momentum from the restart, their big forwards managing to build up steam and blast forward, culminating in their hefty lock crossing the line shortly after. Their outside centre had his 'kicking boots on and increased their lead to 21-7.

For the last 15 minutes ‘Ensians faced an uphill challenge in this pivotal game, that if lost would dash any hopes of staying in Yorkshire 2. Joe Armitage came off the bench to bolster the ‘Ensians’ defences. Hills also made a substitution, seeing a very skillful centre take to the field wearing the no.18 shirt, who pressured ‘Ensians for the remainder of the game.

Playing out of position Rob Lofthouse and James Bagnall made good yards and put in some strong tackling but this wasn’t enough as the home side started to relax into their game and started to play with more confidence. Wheatley's Nr 13, content with his performance so far, attempted a long penalty from near the half way line. Failing to increase their lead, Hills gathered the ball, following the 22 drop out and forced their way back towards the visitors try line. Some poor tackling saw their vexing scrum half bustle his way over in the corner to take the score to 28-7, following another successful conversion.

Before the visitors had a chance to gather breath, the restart was underway and their scrum-capped no.12 supported by his winger made an incisive run, cutting though Ensians’ defences, taking the score to 33 - 7. In the last 5 minutes of the game ‘Ensians were rewarded with 5 points from a super try in the corner from Rob Lofthouse following a lovely break and pass from Luke Cowdell. The home winger then responded to complete the scoring with a final unconverted try with the game ending 38 – 12 in the home side’s favour.

A disappointing end for Ensians’ and their hopes of staying in Yorkshire Two.