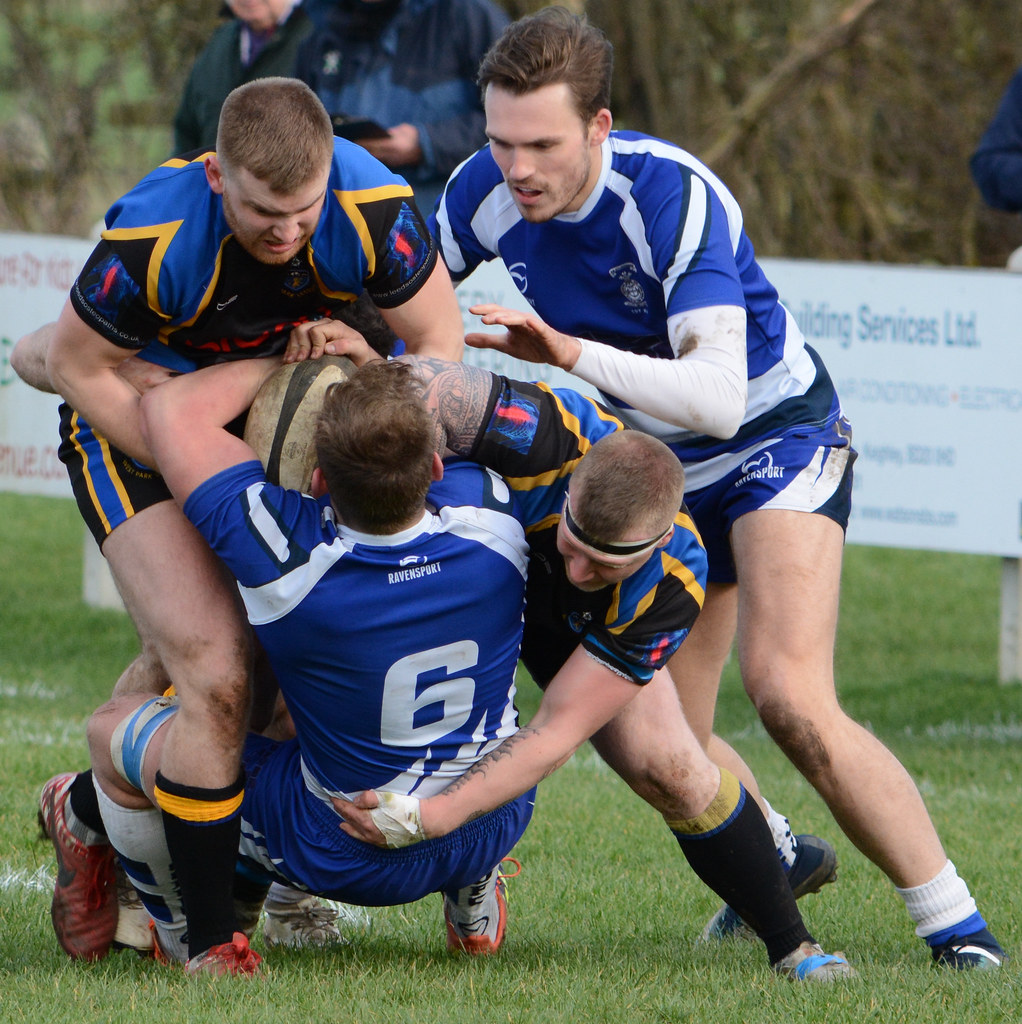 Paddy attracts the attentions of the West Park Leeds defence

Might have, could have, perhaps should have……On a day dominated by possibly the hardest element to deal with, a strong gusting wind, ‘Ensians just didn't have enough to overcome West Park’s half-time lead of 22 points to 5. “Winning” the second half 10 nil and matching the visitors’ three tries was not sufficient and although pressing so hard in the last quarter, further scores were not to be. West Park did well to keep their hosts out and indeed counter- attacked strongly to relieve their line and force the home team to mount further assaults from deep. West Park were happy with the win; Old Otliensians reflected on their preference to defend a first- half lead rather than chase the game in the second session.

The visitors won the toss and chose to play with the wind at their backs and from the kick off ran the ball back into their opponents’ 22. ‘Ensians, with little option but to run their way out of trouble, saw a pass intercepted and after only 5 minutes a converted try put them 7.0 down.

A good break by the home side’s winger Nick Hesketh was halted, but play was brought back for a penalty, and with kicking into the wind being so difficult, a scrum was taken. West Park won the scrum penalty and a kick with the wind took play into the ‘Ensian 22. An intercepted West Park pass raised home spectators’ hopes, but these were quickly dashed by an offside decision which was converted to give the visitors a lead of 10.0 after 12 minutes. An immediate riposte pinned the visitors in their 22 and Joe Armitage went over for an unconverted try on the quarter-hour mark. 10.5 —all to play for.

Play continued to ebb and flow with conditions prompting handling mistakes and spilled ball in the tackle area. Ollie Eaves made a good break, but a turnover handed possession back to West Park, who seized the chance to run strongly for a further try. A good conversion made the scoreboard disappointing or encouraging reading depending on your allegiance. 17.5 and just 20 minutes gone. Hectic stuff.

‘Ensian forwards had dominance at the scrum, pushing their opponents back time and time again and Luke Cowdell came into the picture with trademark line-breaking, but mistakes were costing the home side. A lost line out gave the visitors another pressure position and on 30 minutes an unconverted try pushed the board further, to show 22.5 against the hosts.The strong wind certainly dictated the pattern of play, but ‘Ensians had parity in many aspects and felt at half time that they could come back into the match.

15 minutes after the restart, ‘Ensians stole a line out and Armitage was over for his second try. 22.10 to the visitors, who then kicked straight out to give the initiative to the home side. ‘Ensian forwards were on top and play in the right areas of the field was now achievable. Sustained pressure in West Park’s 22 resulted in a scrum 5 metres out, with skipper Featherstone touching down for a pushover try. Just 22.15 down with wind advantage and 10 minutes to go gave a glimpse of a try bonus point and a share of the spoils being a realistic target, but the visitors had other ideas. Defences in the centre of the field had been tight throughout and neither side could find a real scoring opportunity. Will Cooper’s interception was almost one such, but was called back for an offside infringement. 22.15 it remained, with a losing bonus point the only reward for the ‘Ensians. Players warm but tired, spectators frozen but entertained, the Clubhouse warmth and camaraderie combining in the essence of Club rugby.

There were some strong individual performances on both sides and from an ‘Ensian point of view it was a case of what might have been. “Good experience” is not always a comfort, but there is much encouragement from their last few performances and they can go into the final phase of their season with high confidence. Hard games, true, but spirit and attitude are praiseworthy indeed.