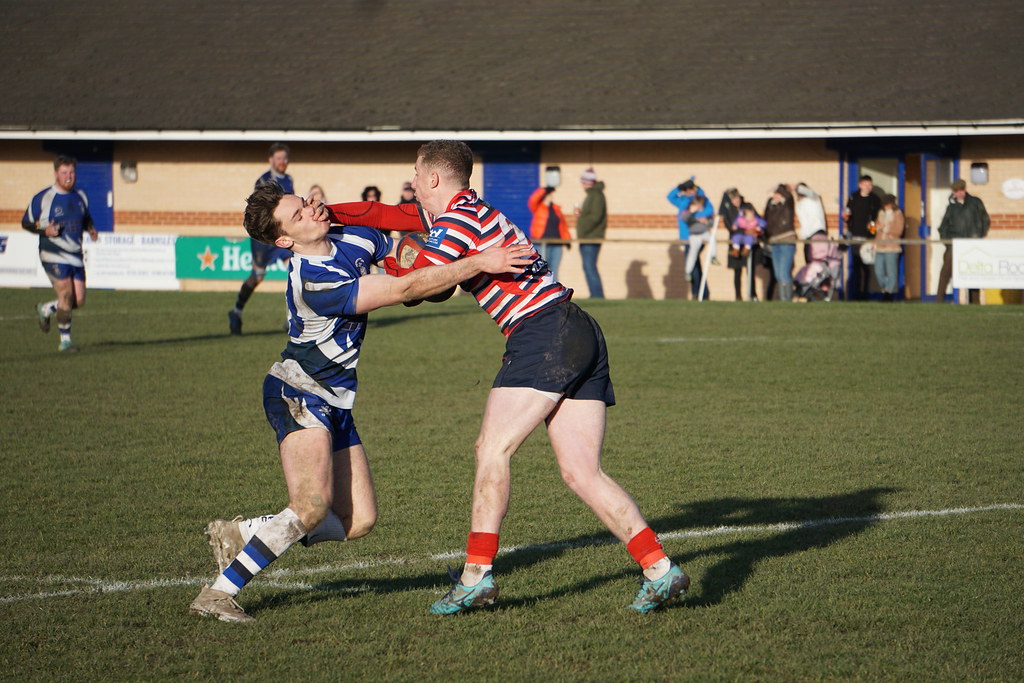 ’Ensians made the M1 (S) trip to Barnsley in search of some points to give impetus to their season and supporters travelled in sincere hope and anticipation. A losing run is difficult to break, but each game is a potential new dawn and ‘Ensians were intent on a good performance in this challenging away fixture.

A very strong wind caused immediate problems for both sides and playing the conditions was clearly going to be the focus of tactics. For the first quarter of the match, ‘Ensians had little territory or ball and defence was the priority. However, the visitors gained a foothold in the Barnsley 22 and after a good line- out, penalty and scrum right on the try line, inside half James Bagnall went over near the corner. Kicking from the tee was never going to be easy and against a corner-to-corner wind, the extra points were not possible and it was 5.0 after twenty minutes. As they began to get into the game, ‘Ensian threes looked dangerous, but were pegged back by Barnsley kicks and were perhaps lucky to have taken the lead against the run of play. This was short-lived however and from a clearance kick, Barnsley ran the ball back and despite good defensive work by the visitors, forced their way over for a converted try to give them the lead at seven points to five on the half-hour mark.

A Barnsley penalty straight from the restart saw a great kick put them back on the attack, but defence held and Will Cooper returned the compliment with a lovely penalty clearance into home territory. A good line-out take by Dougie Elgar and a weaving run by Ronan Maloney from full back exerted real pressure on Barnsley’s line and then, from a quick tapped penalty, winger Tom Beddis went over in the corner. The conversion attempt failed and following a passage of even play in the centre of the field, Barnsley put themselves in the visitors’ 22 and would have been disappointed not to come away with points. ‘Ensians held their line and half time came with them in the lead by 10-7 after a difficult session.

The second period opened and it became apparent that good running and handling by both sets of threes was being negated by fundamental penalty-giving errors at the tackle, ruck and scrum areas. Thus after forays into opposition territory, clearance kicks quickly turned attack into defence for both teams. Forwards needed to settle down and maintain possession legally, but both packs were guilty of careless play. Following some kicking tennis, an ‘Ensian knock-on led to a scrum penalty and the score was tied at 10 points each after fifty minutes. A third try for the visitors came from a classic push-over set piece, with skipper Sam Featherstone at number 8 claiming the five points.

Penalties proliferated and play was anything but continuous, but the hosts put some good phases together and after 25 minutes of the second half a well-worked try, converted, took them into a lead of 17-15. ‘Ensians stirred themselves and a great run by centre Joe Warner led to Luke Cowdell (a “finisher” this week on return from a hamstring injury) with a lot to do. Not a problem!! A la Tuilagi, Luke, with his good-to-see determination and strength, crashed through and over. Will Cooper converted and a dying-minutes missed penalty mattered not. The visitors had earned a victory by 22 points to 17 and their supporters applauded the final whistle with smile on face and spring in step.The coming weeks will of course be difficult, but today certainly gives “something to bite on”.