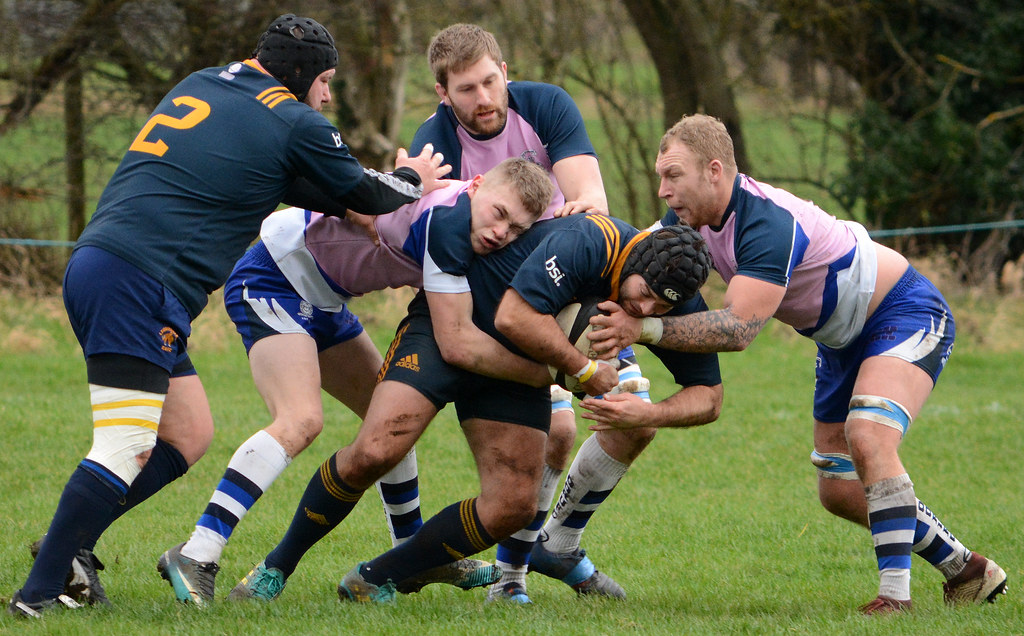 Coming off the back of what could be described as a very unfortunate result against Roundhegians, and facing a team only a few points from the top of the League with a number of the home team’s influential players unavailable through injury, the match against Leodiensian was always likely to be an up-hill struggle for Old Otliensians.

Despite what appears to be an overwhelming score of 8-43, the home team can take some comfort from the fact they stuck to the task with great determination and that, if one or more of the three yellow cards which Leo’s incurred had resulted in the penalty tries which the home supporters felt should have been awarded, the score could have been closer.

There is little doubt the Leeds team had the upper hand for in a first forty minutes played mainly within the ‘Ensians’ own half and, after being prevented from grounding following 10 minutes of play, when held up over the line, they scored three unanswered tries in a period of 15 minutes. The half time score was 3 to 19, in favour of the away team, but the difference would have been much less if the home team had not been unfairly prevented from scoring what would have been a deserved seven points, almost from the kick-off after Leo’s second try. A driving maul by the home forwards to their opposition’s line, and excellent movement of the ball by the backs, was brought to a halt by foul play which resulted in the first of three yellow cards which Leo’s incurred during the game.
The penalty awarded was converted by fly half Will Cooper.

The second half saw the home team playing into a strengthening wind which played a part in the away team extending their lead. Within 5 minutes of the restart an Otliensians’ kick failed to find touch and the ball was quickly moved along the Leeds back line resulting in a try which, whilst not converted, was shortly followed by another opposition try after an intercepted pass.

Despite a mounting score against them the home team maintained a remarkable determination, with the forwards holding their own in the tight and showing their strength in the line-outs, where flanker Dougie Elgar was outstanding. The backs endeavoured to maintain the attacking flair which has been their hallmark over the last few years, despite the conditions, and the team effort should have been rewarded when, after 25 minutes of the second half, the forwards drove Leo’s back to the try line. A yellow card given to a Leeds prop was followed by a scrum, won by the attacking side but with the ball then being then lost and cleared by Leo’s. Regrouping, the home side again drove to the Leo’s line and, whilst it did appear that a penalty try might have been merited, progress was unfairly stopped and a third yellow card was incurred by the visitors.

As some reward for a great deal of effort by the whole team throughout the game, ‘Ensians were rewarded with a late try as the backs combined well to send in centre Ted Stanford, with the conversion hitting the up-right from a very difficult kick into the wind.