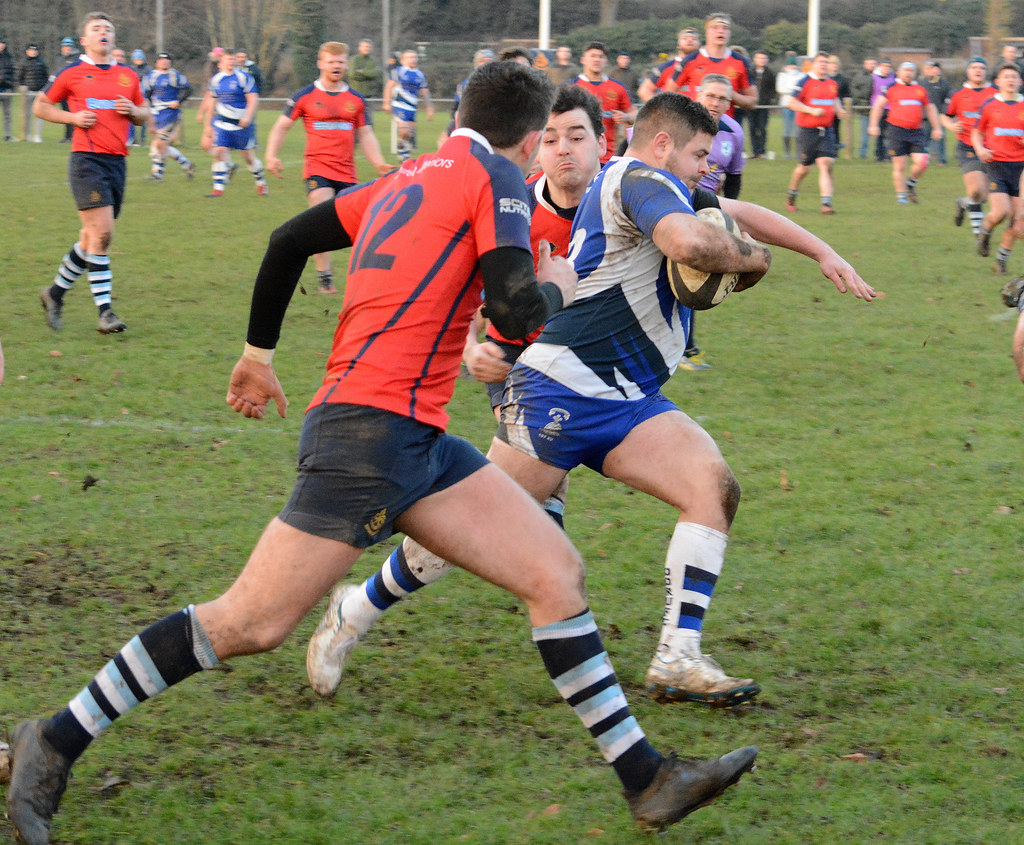 On a bitterly a cold day, ‘Ensians welcomed the wide, firm Ripon pitch, well-suited to their open style of play. The visitors managed to put together some decent spells of rugby, particularly after the break, but in the end a lack of consistency in attack and defence coupled with errors at crucial moments allowed the home side to walk away with the spoils.

Once again the visitors fielded a side depleted through injury and unavailability and it was the hosts who dominated the early stages with good handling and a plentiful supply of lineout ball from their two tall forwards. From the off the home side drove into the visitors’ half with forwards and backs linking well. ‘Ensians defence held as the hosts battered their line. With little possession, the visitors worked hard through half backs Jacob Wragg and Will Cooper to move out of their 22, but kicks upfield with no “chasers” were used by the home side to mount threatening counter-attacks. With the home pack using their well-organised “pick-and-drive”, the pressure eventually told producing a try under the posts with the conversion giving the home side a 7-0 lead on 12 minutes.

As the visitors gradually began to settle, they moved the ball wide using centres Ollie Eaves and Luke Cowdell, but the well-organised home defence snuffed out any promising attacks. Flanker Sam Featherstone and lock Ali Campbell worked hard to command their own ball in the lineout and the visitors’ front row of Dan Stevens, Paddy Phipps and Josh Dyson developed an edge in the scrums. Despite the increase in possession, ‘Ensians struggled to make inroads into the opposition half.

With penalty count going against them, the visitors once more found themselves defending their own line and after switching the ball left and then right, the home side backed up well to force their way over on 27 minutes, the conversion stretching their lead to 14-0.

The visitors then sprang into life with some good driving by lock Tom Dyson, flanker Doug Elgar and No. 8 Rob Arbuckle to take play into the home 22 for the first time. Elgar broke through with a good run and suddenly it was ‘Ensians who were pummelling the home line. A good drive from their scrum failed to cross the line and the hosts managed to stop another drive when ‘Ensians again came close from a scrum-penalty. There was jittery handling by the hosts as they tried to clear their line and, in the confusion, the ball was lost with visiting centre Ollie Eaves scooping it up to dive over. With no conversion, the Ripon lead narrowed to 14-5 on 35 minutes and it was very much “game on”. Unfortunately, with half-time approaching, the home side broke away and a mix-up in defence resulted in a third try on 38 minutes with the conversion stretching their lead to 21-5.

After the break the visitors clicked into gear and set up a sweeping back move down the left flank, full back James Bagnall joined the line only to be pulled down yards short. The forwards then piled in only for a try to be disallowed through being “held up”. The pressure continued and five minutes later centre Ollie Eaves put Luke Cowdell through a gap to score out wide. The excellent conversion by Will Cooper narrowed the Ripon advantage to 21 - 12 on 55 minutes.

The visitors then suffered a set-back with an injury to centre Cowdell with deputising scrum half James Bagnall ably filling the gap. Youngster Joe Ridgway began posing threats when he came on to the wing as replacement and forwards Toby Keep and John Offer added experience when they joined the pack. The visitors continued to attack and, when a penalty was awarded on the home 22, it was decided to go for goal to ensure at least a bonus point with the minutes ticking away. Unfortunately, “sod’s law” prevailed and the kick went wide.

The visitors re-gained possession from the re-start and went on the attack only to see a mis-directed grubber kick bounce of the opposition and allow them to move the ball into visitors’ 22 where they rubbed salt in the wound by converting a penalty to leave the final score to 24 – 12 to the hosts.

‘Ensians were good in parts and could have snatched victory, but handling errors and wrong options contributed to their downfall. To make progress in the second part of the season they need to produce more all-round consistency.