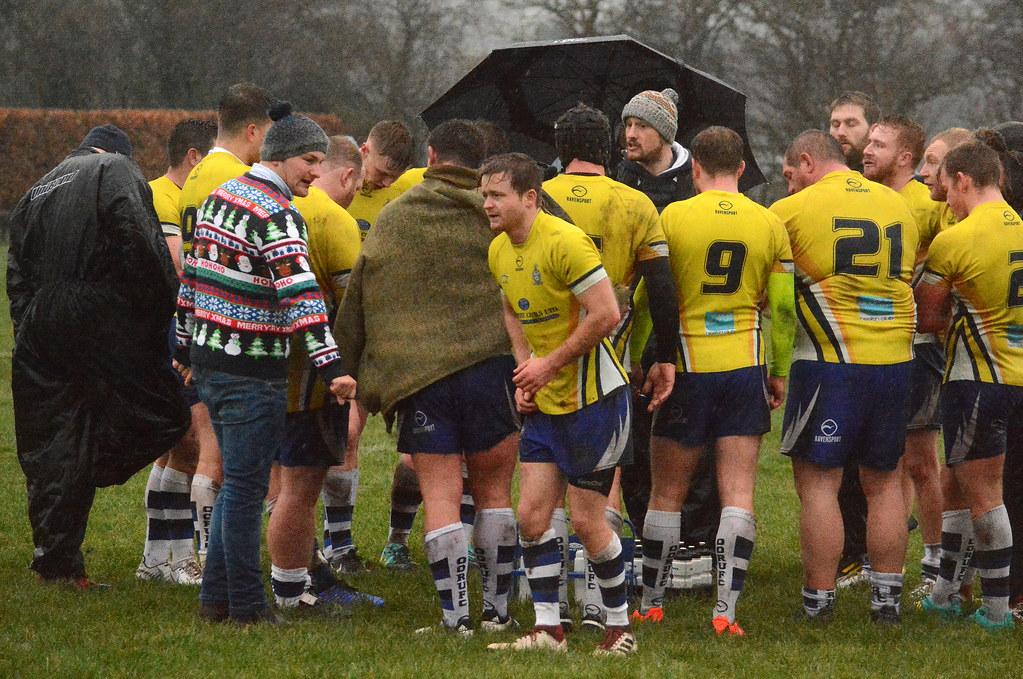 On probably the worst weather in which Old Otliensians have ever played in their many years at Chaffer's Field,with a temperature of 0 degrees C. ,a wind chill of minus 7 degrees. a biting strong Easterly wind and heavy driving freezing rain turning to ice on the pitch barriers, 'Ensians hosted near neighbours Yarnbury hoping to avenge the defeat incurred earlier in the season. Much credit is due to the Referee, every one of the 36 players, the coaches and touch judges plus the supporters of both teams for their fortitude in completing a miserable afternoon but nevertheless in what turned out to be a close and fascinating game.

The home team took the wind in the first half but it was the visitors who moved into their half and after five minutes scored a well taken penalty by full back Will Marshall. The game mainly took place between the two packs in the middle of the pitch with the backs struggling to keep hold of the ball with freezing fingers. Each team had possession from time to time but 'Ensians tackling and defence was good.

After 20 minutes the home team produced a bit of magic .On the half way line 'Ensians, who had be struggling somewhat in the scrums, took the ball against the head .Jacob Wragg and Olly Eaves swiftly moved the ball to Luke Cowdell who made the break and gave an inch perfect pass to Matthew Peatie who outpaced the defence in a 30 metre race to the line for a sublime unconverted try. This gave the home team a 5-3 lead.

Not to be outdone Yarnbury fought back straight away and two minutes later took the lead again with a penalty goal by Will Marshall who was having a fine game for the visitors. The game switched again with 'Ensians turning over the ball, opening up play resulting in Ali Campbell finding touch on the visitor's 22.

Approaching half time the home team ,who had been rather starved of possession ,made inroads into the Yarnbury half with a delightful 30 metres penalty by Olly Eaves.'Ensians then moved into the visitor's 22 putting the defence under intense pressure .A penalty was won and a quick tap taken by Rob Arbuckle who was pulled down just short of the line. However a further penalty was won in front of the posts for a straight forward three points (and the lead) but an Otliensian player made an inappropriate comment, the penalty was turned over and Yarnbury cleared their lines for a half time score of 6—5 to the visitors.

The second half saw 'Ensians playing into the wind ,Play was a tough battle between two teams playing to their limits .Yarnbury powered into the Home 22 and got over the line but a try was disallowed. The home team counter attacked with Matt Taylor breaking tackles in a great run into the visitor's half.

After 25 minutes however the visitors began to tire and the home forwards took over. This was the tipping point and with 10 minutes to play a home scrum on half way saw the 'Ensians push the scrum back 15 metres, resulting in a home penalty for off side. A further scrum was taken and the visitor's scrum disintegrated for another 15 metres gain and another penalty for offside...Yet another scrum was taken and took play well into the Yarnbury 22 but this time the ball was taken by number 8 Rob Arbuckle who passed to Luke Cowdell for a great unconverted try after a quite unbelievable passage of play The home team took control for the rest of the game holding play in the Yarnbury half and coming near to scoring again on one occasion.

This had been a good display by 'Ensians against a determined Yarnbury team and augers well for more improvement in the New Year .Again massive credit must be given to both teams and the officials for sticking to their tasks and providing a fine sporting game in the most horrible conditions.