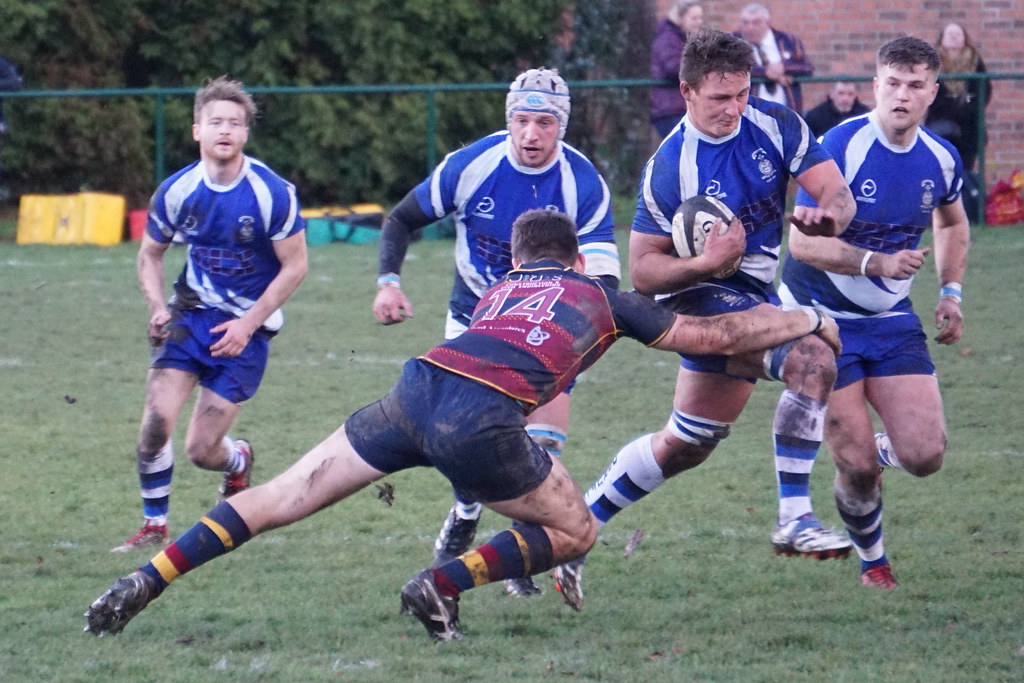 The game was played on a fairly narrow muddy pitch on a cold breezy and showery afternoon.

'Ensians seem to have recently been slow starters and this was no exception .The big heavy Wath forwards took control from the start and a couple of errors and missed tackles resulted in two unconverted tries to the home team in the first 10 minutes.

Despite struggling in the scrums the visitors upped their game and after 20 minutes Rob Arbuckle made a break continued by Joe Armitage moving into the home half .A penalty to 'Ensians followed taking play into the home 22 but sadly the ensuing lineout was lost.

Then on 27 minutes Wath scored a nice try, starting with a chip through collected by the kicker and followed by a good inside pass which wrong footed the defence, resulting in a converted try and a score of 17 nil.

It was then the turn of the visitors to exert pressure with the whole pack pressing strongly but unable to crack the home defence, and so the half time score remained at 17—nil to Wath.

The second half opened with the home team pressing forward ,and in a one to one situation outstanding full back Rob Lofthouse pulled off a stunning try saving tackle on a bulky home player in full flight. The home team continued to press and despite good stern defence scored a penalty goal after 10 minutes to increase their lead to 20—nil.

'Ensians fought back into the home 22 putting Wath under the cosh .After 5 penalties to the visitors the home defence cracked and, after a half break by "Arbi", Joe Armitage crashed through the Wath tacklers to score a fine try converted by Joe Warner.

'Ensians were now playing at full tilt and 3 minutes later the ball was pinched by Adam Williamson who outpaced the defence in a 50 metre race for the line to score beneath the posts again converted by Joe Warner.

The visitors could see victory in their sights ,especially when, with 12 minutes to go, Rob Arbuckle, who was having a fine game, flicked the ball 40 metres out to Joe Warner who screamed towards line and when tackled inches short flipped the ball to Ali Campbell who dived over in the corner for a super unconverted try.

It was now 20 points to 19 in Wath's favour but despite straining every sinew the visitors were unable to make the all important score.

Then on 37 minutes there was a string of scrums for Wath on the visitor's 5 metre line and with purchase difficult on the muddy pitch the home team scored a pushover try to seal the game.

On the brink of full time, however, Wath scored a stunning 40 metre drop goal, completely out of the blue, to complete the scoring at 30 points to 19.

Yet again this was a promising effort by 'Ensians and but for their slow start they could have won. Unfortunately the other results in the league went against them but given the rub of the green a victory may not be far away.

With ensians not having numbers to get a team out for a couple of weeks, team manager tempo had to dredge the ditches to find a team. The pack had a combined age of 389 years !! , so the changing rooms stank of formaldehyde amongst other bodily smells. The front row comprised of chris booth [ playing his first game after following his favourite band round Thailand – gary glitter & the small boys !. I think he said band !], wheely at hooker [ couldn’t stop a pig in the bayhorse passage ] & ray drake [ fastest prop in the clubs history at doing a runner, rather than pay his match subs ! ]. captain for the day was brett, back with professional growler – dicky smith in the 2nd row. Ben jones put his boots on for a run out, with paul tosser [ sorry tosney ! ] in the back row, with shackletons high chair model - dan ridgeway at 8. Alex longstaff dragged himself out of bed after been ill all week to play 9, while 2nd row matty tenniswood moved to standoff to relive his youth. The young lads in the team – greg knox & joe ridgeway played centres, while mark elamb & young joe tindal had to fill the 2 wings & full back role. With Halifax only having 14 ,ensians dropped Russian international rouchard palesky to the bench to make it 14 apiece. The game started with ensians on the attack, & after a bit of back chat from halifax to local referee – pete gillson, matty kicked 3 points to get the ball rolling. The kick-off went straight into touch, then Halifax’s whily 8 stole the line out & a good drive from the big Halifax pack resulted in a try to make it 3 – 5 with 15 minutes on the clock. Ensians replied straight away, with greg knox finding some space, & dodging through several players to score in the corner, just a few phases after kickoff to make it 8 -5. Paul tosser [ sorry tosney ] went off to let Russian international palesky on, but a poor performance & cut ear gave tempo a chance to get him off the park & hand him his p45, & bring paul tosser [ sorry tosney ] back on.. The battle at the line outs was hotting up, with old hand brett having a good old tussle with vandals whily 8, with maybe brett sneaking it in the last 10 minutes of the game. With vandals having a big pack, the ensian scrum held up well, although team manager tempo was concerned he may have to give chris booth the kiss of life [ a daunting thought for anyone!] . Halifax were now getting some good ball to work with, & the lively scrumhalf was using his big forwards to run hard with good offloads to get in behind ensians & score a good try, then he shot down the blind side of a ruck to help himself to one & it was 8 – 19 with 30 minutes on the clock. Just before half time, great back play from joe tindal, greg & young ridgeway ended with New Zealand import – mark elamb scoring in the corner to make it 15 – 19 at half time, & all to play for. The half time team talk was to use the space, don’t kick aimlessly, & use the young legs of greg, joe & tindal to find gaps. A poor kickoff saw vandals run it back with the lively scrumhalf scoring again with 2 minutes on the clock to make it 15 - 26. With dicky,wily wheely & ben getting their second wind, & boothy trying to find his first ! [ apart from the usual ! ], ensians pack were pulling the vandal forwards in to make space for tindal, greg, joe, & old hand elamb, now all running at tired legs & soft shoulders, with greg getting his second & joe helping himself to one. Unfortunately, tindal was held up over the line, but from the resulting scrum, alex longstaff darted over to make it 32 – 26, to take the lead for the first time since the start of the game. With both teams tiring matty put a good kick in behind & a good chase by himself & brother brett caught the vandal’s winger knapping. A good turnover saw joe ridgeway use his young legs to outpace & score in the corner to to make it 37 – 26, to take ensians more than 1 score ahead & deflate the vandals boys. The game finished with dicky diving over the top of a ruck to score & finish the game 42 – 26. A cracking game played in good spirit with the final score not reflecting how much closer it was. Well stuck to boys ! now we move onto aireborough next week, which cant really be called an away game !! can it ??