OORUFC 25 vs 27 Wheatley Hills
A much needed win cruelly, stolen from Ensians in the last seconds of the game 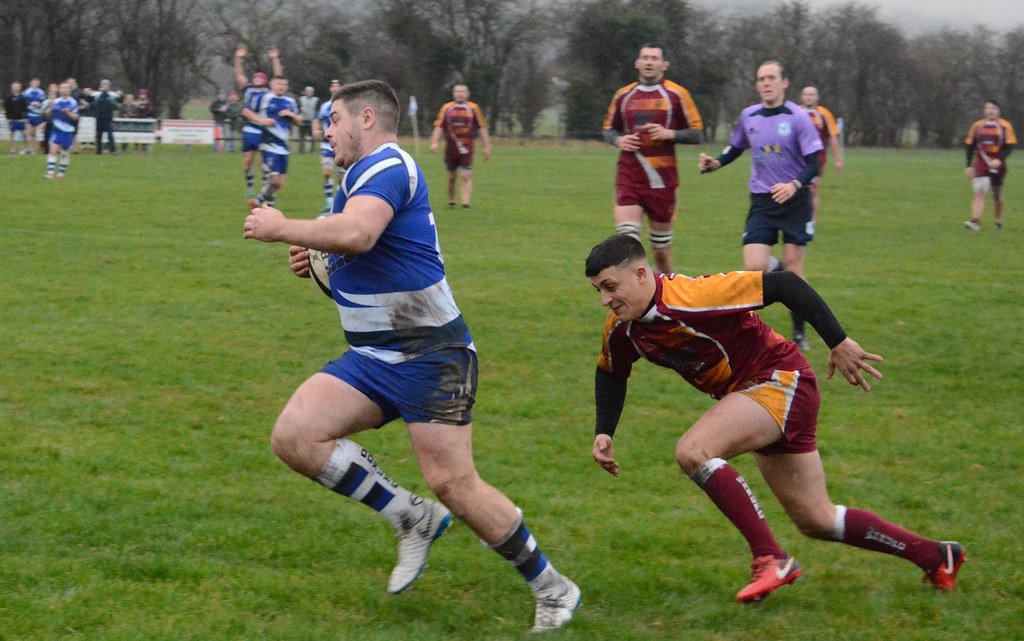 Luke Cowdell scores under the posts. Click for match photos

After a night of heavy rain, the conditions at Chaffers field were always going to be a challenge for Ensians home game against 7th place Wheatley Hills. With many injuries in the squad, Rob Arbuckle came back from retirement to bolster the Ensians forwards and made for evenly matched scrums during the first half.

The scoring was opened on the 7th minute by Wheatley hills; their scrum half taking advantage of quick clean ball from a scrum on the Ensians 22. Chipping the ball through, for their right wing to take over in the corner. The unconverted try stood Ensians at 5 points down.

Ensians made good yards from the kick off, pinning Wheatley in their 22, thanks to excellent tactical kicking by Olly Eaves. Unfortunately, handling errors halted any serious progress towards the opposition try line.

The interplay between the Wheatley Hills scrum half and their right wing saw the visitors go over again in the corner, taking them to 10 points up. After a quick taken penalty Ensians look set to go over in the corner but handling errors gave Wheatley the ball back on their 5 meter line, following a successful line out. A big missed opportunity for the home side.

Ensians kept the pressure on, with a solid scrum moving the ball out to Eaves who was then fouled by the opposite flanker, who received a yellow card. The penalty was successfully kicked by Will Cooper to narrow the score to 10:3.

Quick thinking from Eaves, following a quickly taken penalty, saw Ensians pressure the Wheatley Hills line. The ball was hoofed down field to the visitors 5m line. Again, handling errors ceased any further progress. At the 30 minute point some very astute interplay between winger Matthew Peattie and Nick Hesketh, took Ensians from their 22, back into the Wheatley Hills half. The ball chipped through by Eaves taken on the 5m line by the opposing full back, only to be wrapped up and dragged over the line by Cowdell and Peattie for an Ensians 5m scrum. After an excellent solid scrum the hosts were denied by a penalty, giving the visitors an opportunity to take us back to were we started.

Wheatley Hills piled on the pressure, having their Nr 6 back on the pitch, and on the 41st minute, the visitors full back scrambled over to take the score to 17:3, following a successful conversion. Ensians desperately needed some luck before half time, as the current score didn’t reflect their efforts. With only minutes left of the first half, Ensians moved up a gear and saw flanker Tom Dyson complete a lovely rolling maul, taking the score to 17:8. With the conversion missed, the score stayed the same until half time.

After the restart, we again saw the power of Ensians rolling maul, only to be pulled down by Wheatley Hills 3 meters out. Some refs would have awarded a penalty try but only a penalty this time. Ensians chose to keep up the pressure, opting for the corner rather than attempting the 3 points. Finally seeing Luke Cowdell bustle his way through to score under the posts. Will Cooper’s conversion took the scoreline to a more telling 17:15.

Wheatley hills responded well, with their No 10 breaking through the Ensians defences, taking play yards away from the try line. Following frantic defence, the referee deemed Ensians to be taking the man out from an off side position and awarded Wheatley Hills a penalty try, taking the score to 24:15 to the visitors. Josh Dyson brought Ensians back into contention with a lovely forwards try following a solid scrum. Cooper converting, taking the scoreline to 24:22 in the visitors’ favour. In the 78th minute Ensians were awarded a penalty 26m out, and Will Cooper successfully kicked to give Ensians a narrow lead at 24:25

With only minutes to go, the home crowd were longing for the referees whistle. The last play of the game saw a strong scrum from Wheatley Hills 20m into Ensians half. The referee controversially awarded a penalty to the visitors as the scrum went into disarray, giving their fly half the opportunity to take back the lead which they did. Leaving the score at full time at 27:25.

This was a valliant effort from the home team in what was a disappointing ending to a very close contest, but hopefully something they should build on for the coming crucial games this season.