OORUFC 14 vs 24 Wetherby
An improved performance 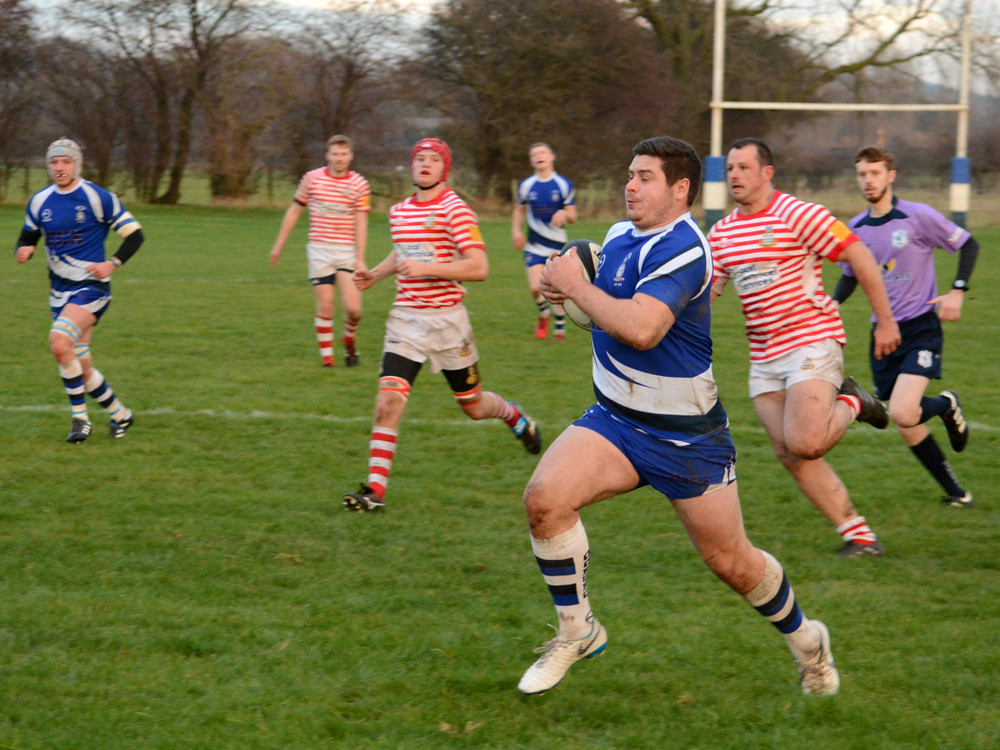 With a rare glimpse of winter sunshine and little wind, conditions were good for this match against local rivals Wetherby. With lock Ali Campbell, skipper Sam Featherstone and No.8 Lee O’Donnell returning after injury, hopes were high that there could be a turn-round in fortune for ‘Ensians. In the end it was not to be, but there were encouraging signs as the hosts battled to the end.

Things started well as the home side put together a string of nine phases gradually making progress into opposition territory when a handling error brought this to an end. There was then a setback when winger Connor Bateman suffered a leg injury to be replaced by newcomer Joe Warner who immediately made an impact from full back. The visitors lost possession in a counter-attack, the hosts re-cycled the ball and, after good handling, Joe Warner used his pace to slice through from thirty metres and touch down under the posts. Will Cooper added the conversion to give the home side a 7 – 0 lead on 13 minutes.

In the set pieces ‘Ensians competed well in the lineout through a good supply of ball from Sam Featherstone and Ali Campbell. The scrums were a different matter and, although the front row of Toby Keep, John Offer and Josh Dyson managed to hold their own in the early stages, there were already signs that the scrummaging of the visiting pack would be a dominant factor as the match progressed. For the hosts, Will Cooper missed a long- range penalty and then on 30 minutes Wetherby surprisingly missed one under the posts.

Home No.8 Lee O’Donnell had to leave the field for treatment of a shoulder injury as the visitors began to use their rolling maul to gain ground before releasing their backs. The hosts continued to spread the ball wide at every opportunity, but handling errors resulted in missed opportunities. As half time approached the visitors showed the effectiveness of their well-organised pack as they scored from a pushover. The conversion failed leaving the home side with a slender 7 – 5 lead on 35 minutes. This looked to be the likely score at the break, but on 38 minutes the visitors fielded the ball in their own half and made good progress up the right. There looked to be little danger for the hosts until two cover tackles were missed and the winger went over halfway out. The conversion gave the visitors a 12 – 7 advantage at the break.

In the second half the home side began to struggle as the visitors used their well-organised driving maul to gain ground before releasing their strong back division. On top of this, they never missed a beat in the lineouts and this abundance of possession put serious pressure on the hosts. Whilst camped in the home 22, Wetherby re-cycled well to cross wide out. The conversion failed, but their lead increased to 17 – 7 on 55 minutes.

The hosts were still very much in the game with centres Adam Williamson and Ollie Eaves working well together and, when winger Luke Cowdell got the ball with little space, he powered through two defenders to run in under the posts from 40 metres on 58 minutes. Cooper’s conversion narrowed the gap to 14 – 17 and the home side were now very much back in the game with flankers Sam Featherstone and Matt Taylor and No. 8 Lee O’Donnell picking and driving well.

Again the hosts began to struggle as the visitors employed their driving maul at every opportunity. They battered the home line for several minutes before the referee lost patience and awarded a penalty try for illegal disruption of a scrum. Now trailing 24 – 14, the home side still managed to put some good phases of rugby together. With Lee O’Donnell to the fore and good support from replacement Jay Walsh, the hosts mounted several promising attacks in Wetherby territory, but sadly, handling errors and infringements meant that chances were missed, leaving the final score at 24 – 14 to the visitors.

This was a much-improved performance by ‘Ensians who worked hard to the end, but they are still searching for the rock-solid defence which was very evident in their early-season encounters. The reputation of the well-organised Wetherby pack proved correct as they dominated the scrums and caused major problems with their driving mauls. The hope is that the improvement in form will continue as ‘Ensians face a tough away trip to Wheatley Hills next Saturday.