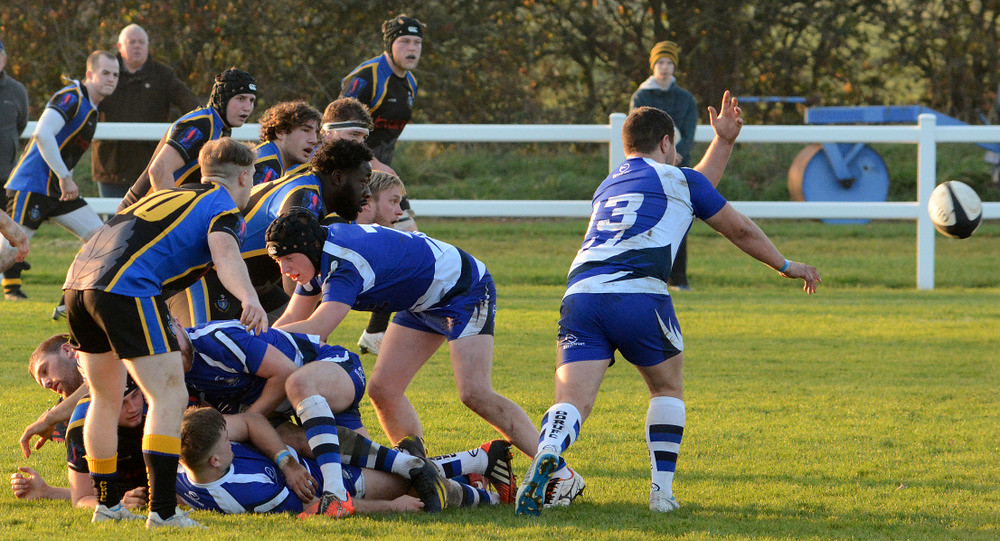 On a cold but sunny afternoon Otliensians travelled to the Sycamores to play near neighbours West Park Leeds. Looking for a first win since September the visitors got off to the worst possible start. From the kick-off the home side pegged Otliensians in their own half and with less than three minutes on the clock a neat chip into the visitors 22 was gathered by the winger who dived over to score a try near the corner.

Both packs fought hard to gain the ascendancy but it was West Park Leeds who increased their lead to 11-0 with two penalties. The hosts scored a second try on the half hour mark when the ball was spun wide to their right wing who sped past his opposite man and cut inside the Otliensian full-back to score under the posts. The conversion made the score 18-0.

Chasing the game, Ensians turned down two kickable penalty chances opting to run the ball. The visitors eventually got their reward when a chip through by Olly Eaves caused confusion in the home defence, Connor Bateman was quickest to react and gather the ball before diving over near the corner. The conversion was missed leaving the score 18-5 at half time.

Otliensians started the second half with far more purpose but then proceeded to concede a soft try ten minutes in to the half when the West Park Leeds blind side flanker ran through some poor tackling to score under the posts. The extras gave the hosts a comfortable 25-5 lead. The home side then secured a try bonus point when their stand-off jinked his way through the Ensians defence to score a fourth try under the posts. Following the conversion West Park Leeds now had a commanding 32-5 lead.

Otliensians endeavoured to get back in to the game but their prospects were dealt another blow when substitute Nick Keinhorst was sent from the field for dissent to the referee. The hosts were quick to exploit the extra man advantage and moved the ball wide at every opportunity. After several phases of play the hosts created an overlap and scored in the corner to increase their lead to 37-5.

This lead was extended to 42-5 when the home backs again exploited the space and created an overlap for their substitute centre to score wide out. The visitors defence was now looking very tired and West Park Leeds continued to take advantage of the extra man with their well drilled back division creating lots of chances. In the last five minutes of the game the West Park Leeds right wing man scored two more tries, completing his hat-trick in the process, both of which were converted to leave the final score a resounding 56-5 for the hosts.

Despite the scoreline Otliensians can take heart from some aspects of this performance. Towards the end of the first half and the beginning of the second half they played some attractive rugby and were unfortunate not to add to their try tally. With several players sidelined at the moment their return will only add to the strength of the squad.

After struggling to get a team for a few weeks, team manager tempo was desperate to get the game on. Baildon have been in a similar situation, so team sec Beardo had agreed with Baildon that the game would happen whatever the numbers were. Baildon turned up with 16 which included a player from the bumble bees [a special needs team] & it was agreed he would come on for the last 10 minutes.

Ensians had 13, with Tempo having to travel to the deepest pits of hell to dig up ex first team captain & professional growler “Dicky” Smith to bring some grunt to the pack. With Jorden Lawrence being the only front rower, the scrums were uncontested. Big eddy & Paul Tosney lent on to fill in the missing prop & hooker.

The Tenniswood twins manned the second row with Brett playing even though his back wasn’t in a good way. Dicky put his special talents to the 6 shirt, with ben smith 7 & Dan Ridgeway back in his favourite 8 position. With Ensians having 13, fletch the Baildon captain lent Ensians a scrum half - Aaron who was sh*t hot which meant the game started with 14 apiece [top man fletch!].

Alex Longstaff moved to 10 with the juggernaut James smith at 12. Captain Connor moved to outside centre, which meant mark elam & new man cam had to play both wings & fullback between them.

From the start Ensians attacked with Dicky making some hard yards. From a penalty James smith ran hard to scatter the Baildon defence, then big eddy took it on before breaking his ribs in contact to end his game. On a positive note - Aaron scored, so it was 7 – 0 with 2 minutes on the clock, with Matty converting & Ensians down to 13 for the rest of the game.

Petrov Temposkavich was on the touch line watching, but his contract with Poland meant he couldn’t put his boots on even though he was tempted! From the kick off Baildon attacked, & it was Ensians turn to defend with Jordan & Dicky putting in some big hits along with James smith in the centre. Unfortunately, Dicky got a bit giddy, so he was sent to the naughty corner for ten minutes, in which time Baildon used the numbers with 14 against 12 to score 1 try & make it 7 apiece.

Dicky came back on & 2 minutes later, captain Connor was next to visit the naughty corner for a high tackle, & Baildon again used the numbers to score, to make it 12 – 7. With Ensians now getting on the wrong side of the ref, penalties were costing them & Baildon used them to attack to make it 24 – 7 at half time.

The half time team talk was – support your team mates, keep your gobs shut & use the juggernaut to punch holes & Aaron snipe around the rucks.

The second half didn’t start well when a poor pass went to ground & kicked on by Baildon to make it 29 -7 with minutes on the clock. From the restart Ensians threw everything they had at Baildon, with Jordan, Matty & dicky running hard to cause problems & the effort was rewarded with Dicky going over to make it 29 – 14 with Matty’s conversion.

Ensians were now getting a few phases together & it was Basildon’s turn to get on the refs wrong side & James smith smashed his way through to score under the posts to make it 21 – 29 to Baildon. Baildon replied with a try of their own before James smith smashed his way over again to make it 28 – 36 to the visitors at this point, Assan & his brother Aseall came on for Ensians & Aaron went back to Baildon for the last ten minutes as agreed & apart from Baildon not smashing Assan in the tackle, it was still game on.

Captain Connor had to leave the field with what turned out to be a dislocated shoulder to add to the injury list. Jorden nearly forced his way over & Ben Smith, but a knock on gave Baildon the ball & they worked it down the field to score the final try to make it 28 – 41 to finish the game.

A good game played in good spirit with Aaron having a cracking game for Ensians [teams usually give you their worst player] , Cam playing well for his first game & Dicky rolling back the years to put his boots on. With Ensians playing a lot of the game 2 players down & Brett struggling to run, a cracking performance to make you proud of the boys, coming close to winning at times.