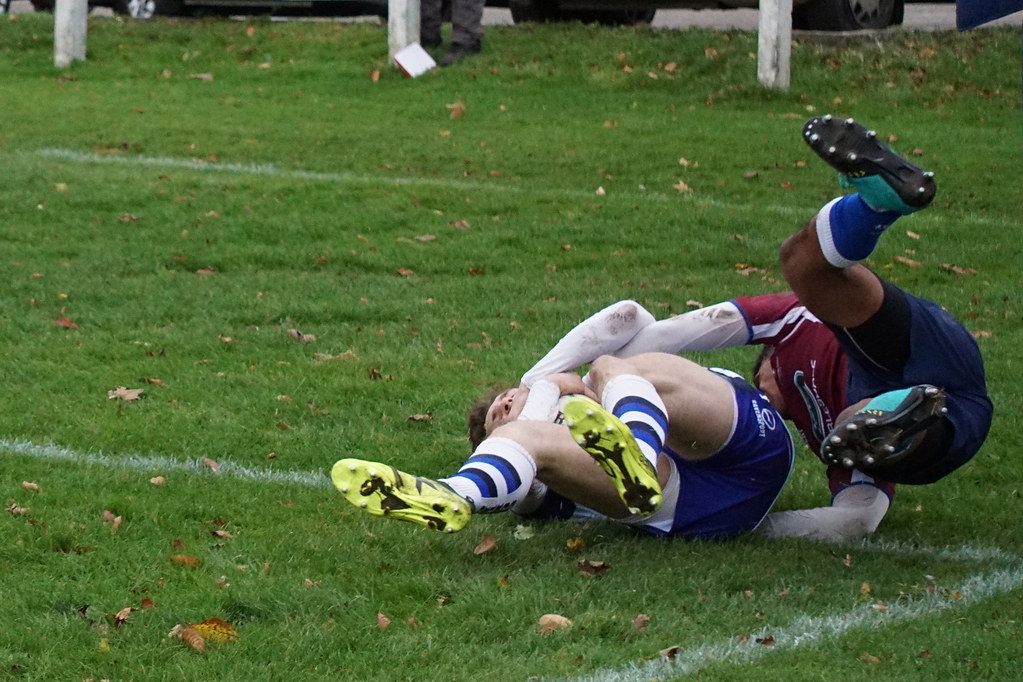 Morning sunshine turned into a dull, low-cloud, afternoon and reflected well the sombre 2-minute silence pre kick -off in acknowledgment of the cessation of World War One.The flat, nicely presented pitch looked in good order and the Silver Trophy round one was under way.

I suppose if you pit 14 men against 15 on a rugby field, you might in the end expect a one-sided scoreboard. However, sometimes 14 play as 16, with the full team seeming to be outnumbered and for periods during the game that was certainly the case.

The loss of a forward to a red card mid way through the first half was a severe blow to the ‘Ensians, for they were already having to defend fiercely in the face of sustained pressure from the hosts. An early try for North Ribb was cancelled out by an ‘Ensian breakaway effort, when a home mistake allowed winger Hesketh to fly hack through, keep control and gather for a try in the corner. 20 minutes gone, all-square. However, Ribblesdale had enjoyed most of the territory and possession and now with a man advantage, two converted tries around the 35-minute mark saw a very healthy home scoreline of 22-5.

The tide then turned, with ‘Ensians suddenly appearing to have more players than Ribb; territory and possession belonged to the visitors and just before the interval, sustained pressure from the men in blue produced a succession of quickly- taken penalties and eventually an opportunity for Paddy Phipps to run cleverly, holding off the defence until near enough the line to cut through for a try.

The half-time talk at 22-10 was clearly positive, and ‘Ensians restarted as they had finished the 1st session, with a try almost immediately after a jinking run from Matt Peattie, converted by Will Cooper. At 22-17, the game was a good one.

Ribblesdale’s attack and defence were impressive and whilst ‘Ensians’ equally so, after some 15 minutes of the second half, the hosts found their rhythm again and their pressure began to make a difference as the visitors tired.

Four tries, two converted, in the final quarter of the match merely emphasised the disparity in numbers and valiant though ‘Ensian efforts were, North Ribblesdale are a good side and were not to be denied.

The rains came and your correspondent repaired to the warmth of his car for the final ten minutes, subsequently reflecting on his debut for Old Otliensians back in 1954. The opponents that day? North Ribblesdale RUFC! Pathos? Perhaps. Nostalgia? Certainly! Back to serious League matters.