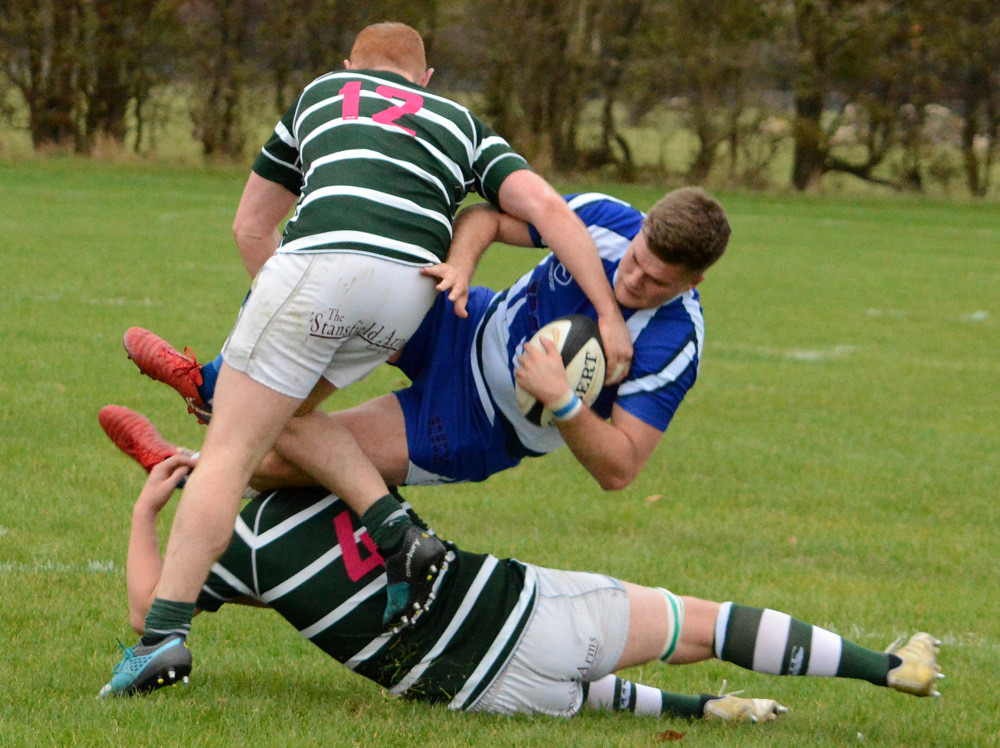 A LATE withdrawal by Josh Dixon meant that Old Grovians could only name two replacements instead of the usual three but they made light of that potential problem by giving a splendid team performance at Old Otliensians in a Yorkshire Division Two derby. A beaming Grovians’ head coach Dan Nulty, who didn’t see this margin of victory coming, said: “It is an old adage in rugby that the forwards decide who wins the game and the backs decide by how much, and it was true of this match. “Winning the previous week against Wetherby gave us confidence and I was proud of all 17 of our players. “We bullied them in the forwards and our backs scored all eight tries.”

Grovians climbed one place to ninth as a result of the victory but wins by Roundhegians and Wetherby dropped Ensians to the bottom. However, vice-captain Will Cooper said: “We haven’t built on last season (winning promotion and the RFU Junior Vase at Twickenham) and we lacked a lot of fight but Yorkshire Division Two is a big step up in standard, numbers are still good at training and we have enough about us to get out of trouble. “We have lost last season’s vice-captain Alex Murphy to an ACL injury, and Jack Smith and Ali Campbell have been unavailable due to work commitments, but we just need to stick to the game-plan. “Things are going all right in training but for some reason we are not clicking on a Saturday.”

If little went right for Ensians up to half-time in this derby, little went wrong for Grovians. The visitors took the lead in the seventh minute when, having found no joy through the middle against Rob Arbuckle and co, they spun the ball left and centre Anthony Griffin broke to put winger Jason Wright over, with Nathan Barr adding the conversion. It took the hosts a further ten minutes to mount a serious attack and, although it was twice slowed by sloppy bounce passes, they kept possession for several phases until the ball was knocked on.

In the 19th minute, Ensians lost skipper Sam Featherstone, with the flanker having cuts on his scalp and near his nose, and seven minutes later Grovians were over again. Flanker Jack Hartley ran strongly down the right, and full back Max Kennedy managed to hold on to a pass on the left which was behind him before Barr jinked over and converted.

Kennedy’s kick downfield then forced the home side to hack the ball over their own line, and Ensians were again their own worst enemies when being penalised for crossing in midfield. Barr, however, missed the 33rd-minute shot at goal on the diagonal from the 10-metre line but was successful two minutes later when a strong run by centre Pad Burns led to Griffin outpacing the cover on the right before running the ball behind the posts.

Old Otliensians’ best opportunity in the first half came on 40 minutes when Grovians right winger Luke Hope-Robertson dithered in defence but was bailed out by a magnificent cover tackle by Kennedy in the corner that not only denied home full back Connor Bateman a try but ruled him out for the rest of the game with an injury to his right knee. There was still time for Wright to blow a potential breakaway try on the left by knocking on but Grovians will have been chuffed with their 21-0 half-time advantage.

The visitors were awarded the first two penalties of the second half by referee Jon Tomlinson (West Yorkshire Society) but Barr missed a pot at goal from between the 22 and the 10-metre line.

Grovians lost lock Joe Lawrence with a knee injury eight minutes into the second stanza, but it seemed to matter little to the visitors, who scored a minute later when Kennedy, back after three weeks off with concussion, scored a choice solo try. Barr missed the conversion and Ensians gave themselves hope when flanker Joe Armitage scooted over in the 56th minute for Cooper to convert. Five minutes later, however, any chance of a comeback was ended when Griffin was on the end of a Burns offload to score, making it 31-7.

Ensians centre Luke Cowdell summed up their afternoon by knocking on when presented with a decent opportunity in the 65th minute, but Kennedy, with his distinctive red, green and white scrum cap, almost made them pay with a try at the other end two minutes later. At least Ensians got a second try with a beautiful example of the driving maul in the 73rd minute, with lock Joe Walsh peeling left to score. Cooper missed the conversion but Grovians finished the match with three late tries.

Hope-Robertson capitalised on another powerful Burns run to score in the 76th minute and, after the hosts lost hooker Paddy Phipps injured, Hope-Robertson, who minutes before had to pass a head injury test on the sidelines, scored a wonderful solo try in the first minute of stoppage time. Despite being urged to kick the ball to touch, the former Baildon winger ran 65 metres, weaving in and out to score an exceptional five-pointer. Griffin then added another choice individual effort, and Barr’s conversion made it 48-12, but it needed some excellent defence by Hartley, pressed into action on the right wing, in ripping the ball out of a tackle and clearing it downfield to prevent a potential third home try right on the final whistle.