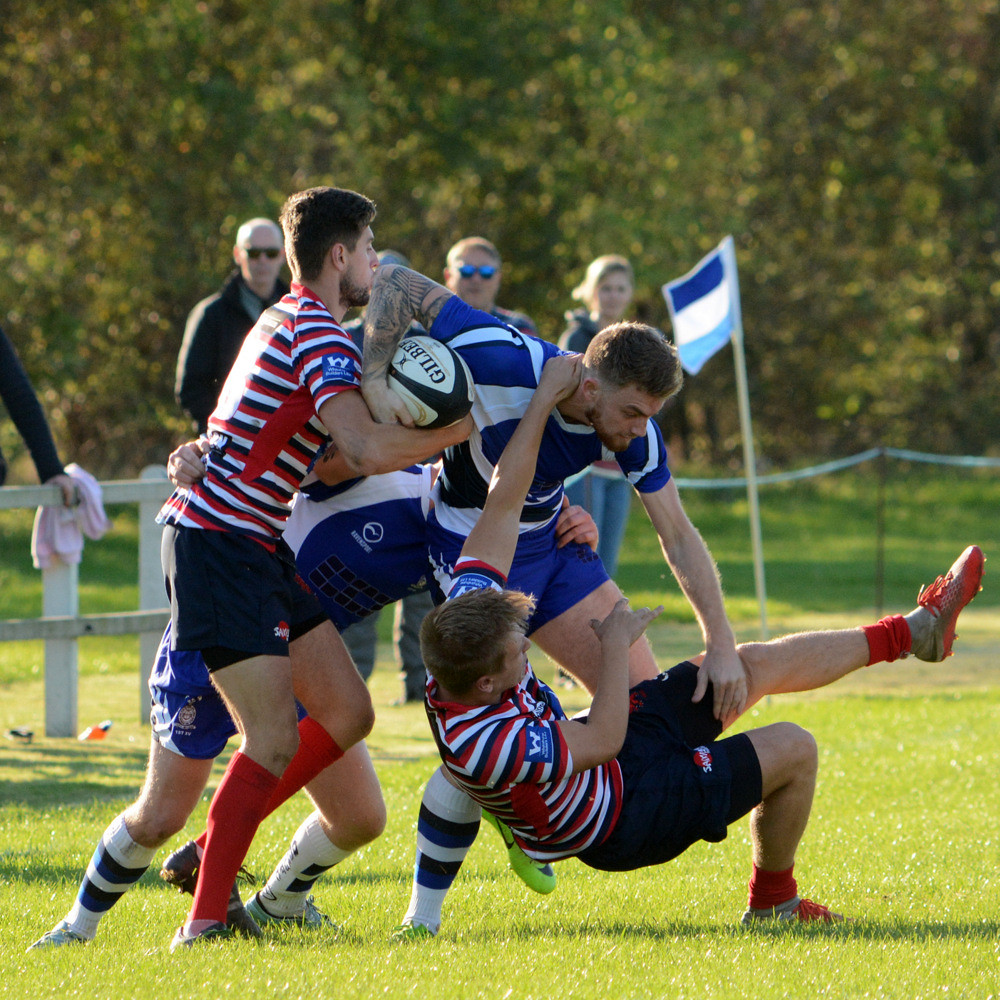 Another fine, warm autumn day greeted the players and supporters to Chaffer's Field for the first visit of Barnsley for many years..

'Ensians feared that they would be up against it due to the ravages of injuries to at least seven of the first team squad .Despite this taking advantage of a brisk breeze the home team started brightly taking play deep into the visitor's half and, despite sound defence from the visitors, took the lead with a penalty goal from Will Cooper on 10 minutes. All the play was in the visitors half and after 20 minutes 'Ensians gained good lineout ball through Sam Featherstone ,Ali Booth made a half break but the final pass went astray with the line beckoning.

A couple of minutes later a strong foray from the visitors took play into the home half but the home defence held. However the key moment of the game occurred on 25 minutes when strangely two 'Ensians received yellow cards for an illegal but non malicious tackle .Barnsley powered over for a converted try from the ensuing penalty to take the lead by 7 points to 3.Not to be outdone the 13 men regrouped taking the ball into the visitor's 22 for much of the 10 minutes until the players returned.

After 37 minutes a fine move by Barnsley from their own 10 metres line saw the ball sweep across their backs for their speedy winger to outpace the defence to score a converted try. The home team retaliated with another penalty goal by Will Cooper to make a half time score of 14 points to 6 in favour of Barnsley .Unfortunately 'Ensians had not taken full advantage of the breeze and territorial advantage they had enjoyed.

Barnsley put on pressure early in the second half with the home team struggling somewhat in the scrums and lineouts .After 10 minutes the visitors chipped a ball nicely to the try line but in diving for the score the ball was knocked on. This gave the visitors a foothold on the home line and from a later scrum their heavy forwards drove the ball over for a converted try (21—6).

To their credit 'Ensians adopted their open style of play but in an attack near the half way line the ball was lost and a hack through enabled a Barnsley player to outpace the defence to score an unconverted bonus point try (26-6).

In the next 8 minutes the, strong, well drilled Barnsley team scored two more unconverted tries, through their big forwards and speedy backs.

'Ensians were missing their injured senior players but Connor Paley, Michael Philpott, Jay Walsh, Michael Groves, Charlie Tucker and Joe Ridgway who had been drafted in to replace them acquitted themselves well .They joined with the rest of the team to keep their heads up and try as hard as they could for the last 10 minutes not only to keep the visitors at bay but to put in some nice moves as well.

It was an entertaining game for the neutral and, yes, the best team won.