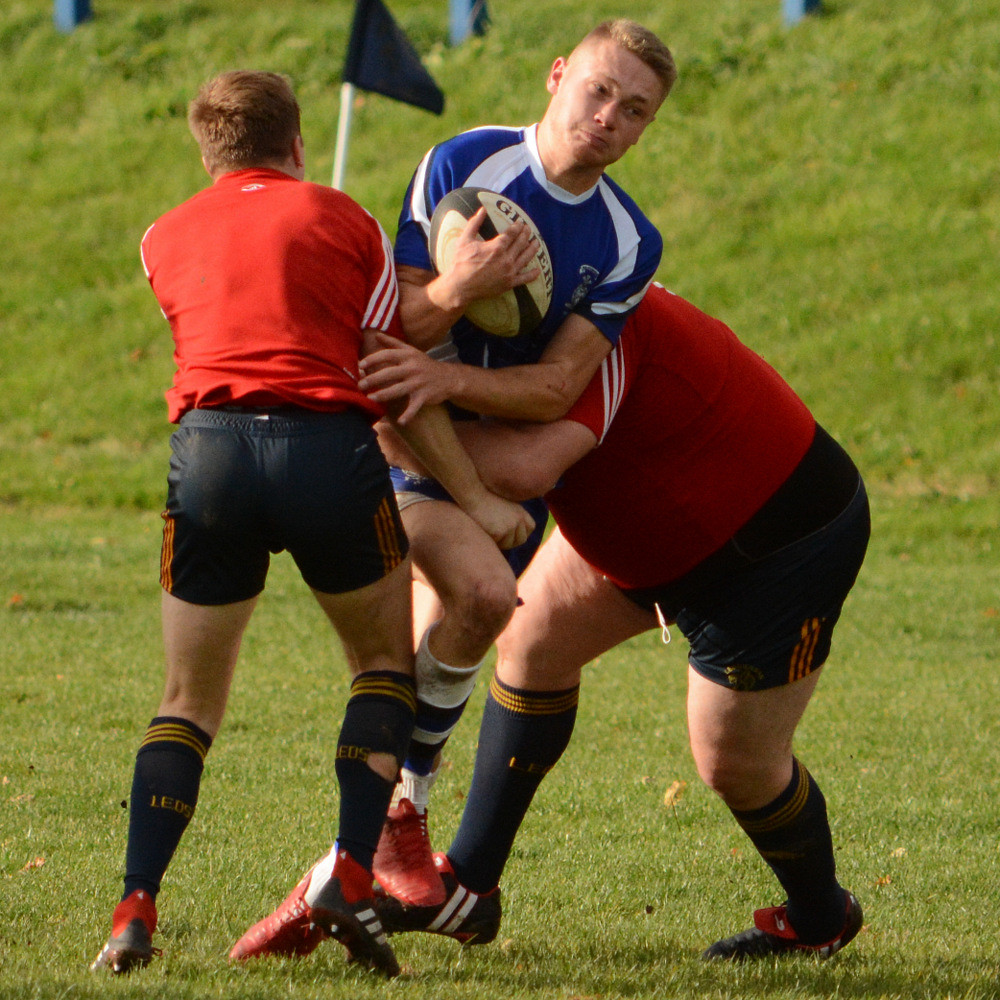 This match took place in a blustery cross-wind with both sides having difficulty with the conditions at times. The home side started the brighter with their solid scrum and lineout providing ample possession to put them in front, but a determined response from the visitors saw them fight back to take a slender lead halfway through the first period with a close game seemingly on the cards. That matters turned out very differently was down to serious lapses in the visitors’ normally sound organisation and defence, coupled with sound handling and powerful running by Leos. The outcome was a rare and heavy defeat for ‘Ensians with credit going to Leos for grasping the initiative with an enterprising display

The early stages were dominated by the hosts who used a steady supply of lineout ball from their tall lock to take the game to the visitors. Moving the ball from right to left and back in the 22, a gap in defence appeared and they crossed half way out. The conversion was blown off course to give them a 5 – 0 lead on 10 minutes. The visitors responded with fly half Will Cooper producing long diagonal kicks to gain territory. Leos infringed and he landed an excellent 40-metre penalty to narrow the gap to 5 – 3 on 15 minutes.

The visitors continued to apply pressure with powerful drives from flankers Paddy Phipps and Joe Armitage supported by No. 8 Sam Featherstone and lock Lee O’Donnell. Lively scrum half Rob Lofthouse whipped the ball out and to centre Luke Cowdell who had been a constant threat in attack. He jinked and forced his way through several defenders for a fine try under the posts. Cooper added the points to give the visitors a 10 – 5 lead on 17 minutes. ‘Ensians’ centre Ollie Eaves had to leave the field after a knock with Connor Bateman coming on as replacement,

Meanwhile Leos pushed into the visitors’ half where they kicked a penalty, narrowing the gap to 10 - 8. This seemed to spur on the home side and, with forwards and backs combining well, they continued to attack as Ollie Eaves returned to the field. Having missed a penalty, the hosts went back into the offensive as visiting full back Matt Peattie pulled off a try-saving tackle. With halftime approaching Leos backs mounted a strong attack to go over near the posts, the conversion giving them a 15 – 10 lead at the break.

For the visitors, forwards Ross Nichols and newcomer Jay Walsh came on in the pack. In the lineouts they continued to command their own ball as well as managing a nudge in the scrums. However, things didn’t go their way when they were penalised twice in the first few minutes. Leos kicked a penalty and followed this up three minutes later with a well-worked try taking their lead to 25 – 10 on 51 minutes. With their tails up the hosts were now throwing everything at the visitors who were guilty of missed tackles and wrong options. The result was that four minutes later the home side put together another score with pace and good offloading proving too much for the disorganised defence. Luke Cowdell saved another try when he gradually overhauled a Leos winger as he was about to dive for the line.

There was then a positive response by the visitors who worked their way upfield and actually bombarded the Leos’ line where a try seemed to be on the cards, but handling errors and a loss of composure allowed the hosts to clear their line. In the closing minute, to rub salt in the wound, the home side broke down the middle and then worked the ball wide as the visitors ran out of defenders. The conversion lifted the final score to 39 – 10.

After twenty minutes of this encounter, ‘Ensians looked as though they were in with a chance of victory, but a lot of errors in handling and defence, coupled with a lack consistency and direction allowed Leos to gain the ascendancy and they never looked back. The disappointment showed as the players left the field and, hopefully, they will re-group in time next Saturday’s tough game at home to Barnsley.