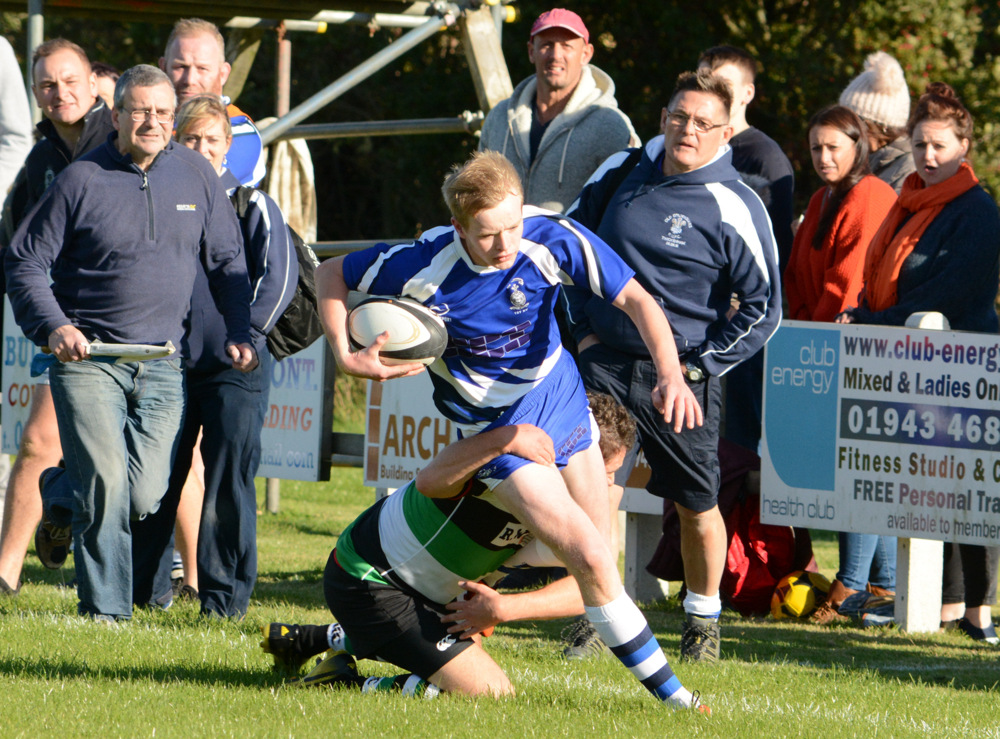 As is so often the case, the wind played a part in proceedings at Chaffer’s Field with the home side taking advantage of it in the first half enabling them run in two tries and convert a penalty. Despite having the edge in territory and possession, the hosts did not find the going easy against the visitors’ solid defence. ‘Ensians enjoyed a 15 – 5 lead at the break, but with the wind now in their faces, a difficult second half lay ahead.

‘Ensians fielded two teenagers in their starting line-up, with nineteen-year-old Charlie Tucker making his debut on the left wing and eighteen-year-old Matt Peattie filling the full back role. Both featured well in both defence and attack.

The home side went straight into the attack, moving the ball wide to take play into the visitors’ 22. ‘Hegians’ defence held out, but as both forwards and backs battered the line lock Lee O’Donnell broke through to touch down on 12 minutes. Will Cooper’s conversion bounced off the post giving the hosts a 5 – 0 lead. Fly half Will Cooper used the wind to good advantage, testing the defence with long diagonal kicks to the corners. He converted a penalty on 24 minutes to stretch his side’s lead to 8 – 0.

Despite powerful forays from home centre Luke Cowdell and a long curving run from winger Nick Hesketh, the visitors defended soundly and eventually managed to work the ball upfield where good re-cycling and support play produced a try on 30 minutes. The conversion failed, with ‘Ensians’ lead reduced to 8- 5.

The home side continued to attack with half backs Jacob Wragg and Will Cooper moving the ball wide to produce some good runs from newcomer Charlie Tucker and centre James Bagnall. Powerful centre Luke Cowdell had always looked threatening and on 34 minutes he cut through a gap for a fine score. Cooper’s conversion stretched the lead to 15 – 5.

After the break, and as expected, ‘Hegians used the wind to push the hosts back into their own 22. The home scrum with front row of Dan Stevens, Tom Howard and Josh Dyson held its own and, pleasingly, the home lineout functioned much better than of late with clean ball from skipper Sam Featherstone and lock Dougie Elgar

Although veteran forward Rob Arbuckle theoretically “retired” after the Club’s National Vase success last May, life watching from the touchline did not suit him and he came on at half time to add experience and weight to the pack. After ten minutes, some good driving from Lee O’Donnell, prop Dan Stevens and Rob Arbuckle moved play into the visitors’ 22. The backs mounted a series of attacks and lively flanker Paddy Phipps was on hand as usual to link up and scamper over on 50 minutes. Cooper added the conversion and the home side now had a more comfortable lead of 22 – 5. This was followed on 58 minutes by Lee O’Donnell’s second try as he forced his way over wide out. The conversion failed with the lead now 27 – 5.

Locks Ali Campbell and Ross Nichols came off the bench and helped set up a home back move which saw Peattie break clear on halfway only to be gradually overhauled by the opposition winger as the line beckoned. The visitors also lost a player through a yellow card after a deliberate knock-on as the hosts attacked.

Although trailing, ‘Hegians were far from finished and they moved into the home 22 as they capitalised on handling errors and penalties. A quick tap from another penalty allowed them to drive over for their second try on 70 minutes. Their conversion attempt failed with the gap narrowing to 27 – 12.

The home side continued to attack with lock Ross Nicholls producing a galloping run into the opposition 22 before being brought down. From a scrum Rob Arbuckle was justly rewarded with a try as he picked up and drove over. The failed conversion took the final score 32 – 12 to the hosts.

This was a well-deserved bonus-point victory for ‘Ensians moving them up to 7th position in their League.

With team manager tempo only having 13 on Thursday night before losing two to the first team who are struggling badly with injuries, an s.o.s was sent out to the younger players along with a final push, and it looked like 16 bodies were going to travel to Wharfedale, but with 2 no shows, it meant 14 turned up to face the green machine who had there own team problems with only 13 starters. It was soon evened up to 13 apiece though by chris booth who lasted 5 minutes before an ankle injury forced him off. After a small cry & father to son chat by tempo, he returned, before retiring 5 minutes later for good, after been sick [ beer induced ]. This made the victory from the makeshift pack even sweeter! The front row was made up of - wheelybin, [out of contract sarecen ] – jock [ not the London club! ] & newman - jay walsh who gets better every game. 2 nd rows were matty tenniswood & paul tosney, with joe ridgeway multi-tasking by playing 7 while been the main lineout jumper, & the “ juggernaught !” james smith putting his boots on for the first time this season at 8. Alex longstaff put his experienced head into the 9 shirt while harry b played his first game for ensians at 10, with an impressive performance to catch the eye. Captain conner moved to 12 with joe tindal at 13. Pensioner mark elam played wing, while the polish flash! lukeasz played his first game for half a season at fullback to make for a likely bunch. Ensians attacked from the whistle with alex using james smith & jay to cause the greens defence major problems. Harry b was firing passes across his back line for conner & joe tindal to make good yards up the field. Joe ridgeway secured & the pack drove on for jock to dive over & score, the referee blew his whistle, only for Wharfedale to explain that he was 5m out! The writing was on the wall & two minutes later, harry b put joe tindal in at the corner with a sweet pass to make it 0 - 5 on 17 minutes. From the kickoff, lukeasz had a solid run to set up the forwards. Jock was been a nuisance like only jock can do & Alex & james were sniping off the rucks while linking up well together. matty & jay were running hard with jay getting the first of his two [ nearly tries ] when breaking the greens defence only to be held up over the line. A good break & soft hands by harry put conner away on one of his deceptive runs which ended under the sticks & ensians 12 points up with matty converting. One thing Wharfedale don’t do, is give up, & they worked hard to get back in the game, but old timer wheely used all his years of experience to play the game at his pace to frustrate them & keep mad micks roaming hands out of the rucks!!. More hard yards by the forwards to draw Wharfedale in & harry put a cheeky chip over the defence & gathered to score to make it 0 - 17, & with the referee saying 1 minute left to half time, a slow walk for the t, steady set up, bit of gazing into the air & kick which missed, the ensians turned to get into a huddle for half time while Wharfedale ran the length of the field to make it 5 - 17 much to ensians surprise. The 2 nd half started with ensians on the attack with a solid run from wheely, but after a few phases, some fresh legs in the backrow for Wharfedale turned over the ball & once they got in behind the defence it was 12 – 17. More good work by harry & the backs to stretch Wharfedale & another barnstorming run by jay & he was through & gone, but the green machine don’t give up & he was held up again over the line for his 2 nd [ nearly try]. A tap & knock on from a penalty by alex saw another chance go begging before Wharfedale broke out again to make it 17 apiece & back in the game. About 20 minutes into the 2 nd half, with a neck injury to jock, the scrums went uncontested which opened the game up more, with joe ridgeway, alex & james having there work cut out keeping the lively backrow quiet, but a great line by lukeasz cut straight through the middle of wharfes defence to make it 17 – 24 with matty converting once more to break the deadlock. Ensians finished the game off with more magic by harry & good pace & power by captain conner to score his second & finish the game 29 – 17 winners. No team looks forward to going to Wharfedale, & this team on paper should of probably got stuffed, but with a great attitude & some fantastic performances by quite a few individuals, ensians won the day. onwards & upwards !