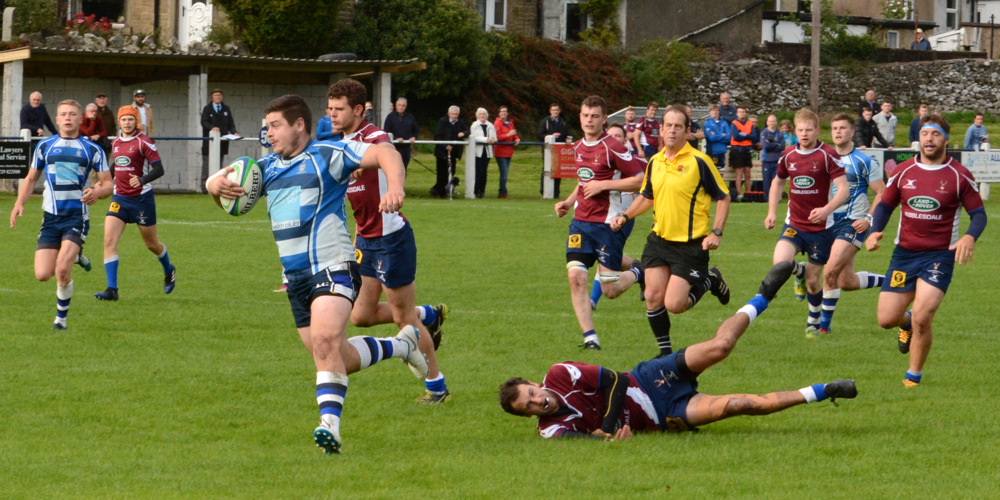 Old Otliensians knew they were going to have a tough game at Settle against a North Ribblesdale team having won all of its games and riding high at the top of Yorkshire 2. However 'Ensians made a bright start on a perfect day for rugby with a gentle breeze and a pitch in superb condition. In an early attack Luke Cowdell broke through a couple of tackles to make a half break but the Ribb. defence held firm.

The home team then made headway into the visitor's half, a penalty was conceded and Ribb took the lead with the three points on offer. The home team continued to put the 'Ensians under pressure but good defence aided by a missed pass kept them at bay.

After 17 minutes it was 'Ensians turn to show off their backs with great expansive play where the ball crossed from one side of the pitch to the other three times in one sequence of play .The Ribb defence was stretched to the limit but the visitors were stopped 5 metres short of the line.

For the next 20 minutes the visitors were attacking strongly and Ribb were out of their comfort zone .From a line out taken by Doug Elgar ,Will Cooper kicked ahead,Ribb knocked on and from the ensuing scrum a super move across the backs resulted in Jacob Wragg being pulled down agonisingly just short of the line. Next a great drive by the forwards took the ball over the line but the try was disallowed.'Ensians were then camped on the line for some minutes with the forwards working like Trojans with Rob Arbuckle ,Paddy Phipps and Sam Featherstone prominent but they just could not get over the line.

When the home team cleared their line the visitors gained a penalty to set up yet a further attack . .Aided by a powerful run by Joe Armitage who broke through two tackles the ball was opened out again resulting in a penalty taken by Will Cooper who duly slotted the ball between the posts to even the score. However just before half time Ribb came back ,but despite losing two lineouts "against the head" the defence held firm to give a half time score of 3—3.

The enterprising play from the visitors continued into the second half with Rob Lofthouse playing at full back taking a high ball at speed and beating three men to set up yet another attack and take play into the home 22.After 6 minutes Joe Armitage and Lee O'Donnell combined to make 15 metres and put Ribb on the rack but Ribb were saved by a penalty.

Next it was the Home team's turn. For the next 10 minutes they strived to make ground with a series of strong scrums, eventually winning a penalty from which their fine goal kicker gave them the lead 6-3.

Straight from the kick off with 20minutes gone, 'Ensians won a scrum 35 metres out, James Bagnall gave quick ball to Will Cooper, who gave a sharp pass to Olly Eaves and in turn he gave a further sharp pass to a sprinting Luke Cowdell who charged ahead to leave the Ribb defence in tatters and score a sublime try between the posts duly converted by Will Cooper to give the visitors the lead for the first time by 10 points to 6.

Ribb were not to be outdone and stormed back in attack. The visitors' tackling was of the highest order with Rob Lofthouse making a try saving tackle and Paddy Phipps, Nick Hesketh and Doug Elgar prominent. After 31 minutes a home break from halfway looked like succeeding but under intense pressure the ball was lost over the line.

With 5 minutes to go and all the visitors supporters keeping their fingers tightly crossed a series of forward phases on the 'Ensians line were thwarted by good defence but eventually the elastic broke and the home winger dived over to score a converted try .The last 5 minutes were in the visitor's 22 and in the dying minutes Ribb scored a penalty goal to make a final score of Ribb 16 'Ensians 10.

It was a fine display by Otliensians against a team which will undoubtedly be in the mix for promotion come the later stages of the season.