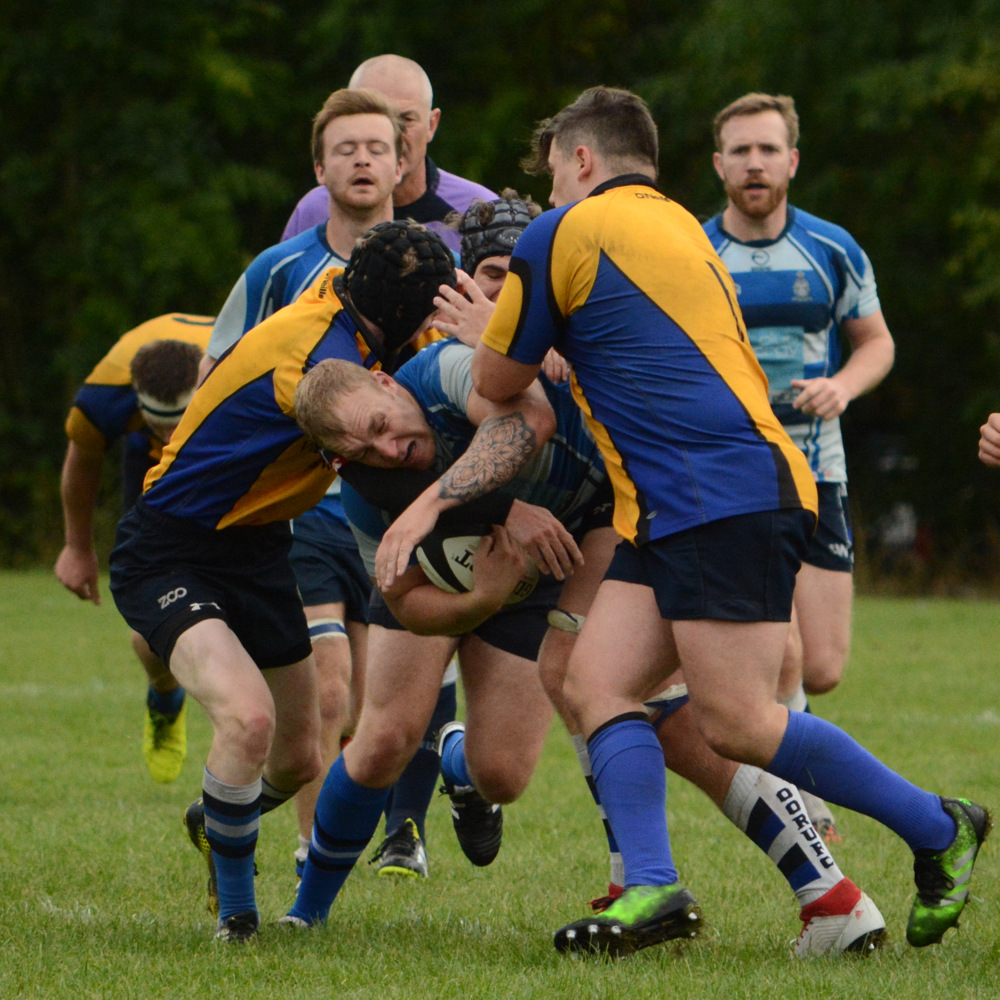 Persistent rain greeted the two teams for this local derby at Brownberrie Lane. Both sides had suffered narrow defeats in the opening weekend and were looking to record their first victories of the season.

The hosts started well and won an early penalty converted by their stand-off for a 3-0 lead on five minutes. The rain and the slippery conditions made ball handling very difficult and the first quarter of the game was littered with mistakes from both sides. With less than twenty minutes on the clock Otliensians attempted to clear their lines with a kick inside their own 22. The kick was charged down and the Yarnbury player gathered the ball to score a comfortable try under the posts. The conversion gave the home side a ten point lead.

The hosts continued to press and from a penalty they kicked the ball to within 5 metres of the Otliensian line. A well drilled line-out resulted in the hosts driving their opponents over the try line for a second try and a fifteen point lead. The added extras gave the hosts a 17-0 lead. With a mountain to climb the visitors started to recycle the ball and pose problems for the Yarnbury defence. A penalty for offside was converted by stand-off Cooper to reduce the arrears to 17-3 and put the visitors on the scorecard.

Having registered a score, Otliensians started to look more confident and ran the ball at every opportunity. On the half hour mark Otliensians won a scrum and proceeded to move the ball out to the right wing. Connor Bateman gathered the ball inside his own half and set off on an excellent run beating five home defenders to score the try of the match and bring the visitors firmly back into the game. The conversion hit the post and was deflected away leaving the score at 17-8. The visitors continued to attack in the final ten minutes of the half but the home defence stood strong and took a 17-8 lead into the second half.

The second half was welcomed with far better weather. The wind and the rain had ceased and the conditions for ball handling had vastly improved. With a twelve point lead the hosts started to kick the ball on a more regular basis and pegged Otliensians into their own half. Mistakes had started to diminish and the game had started to develop in to a war of attrition between the two sides. The hosts recognised scoring opportunities were going to be at a premium and when they were awarded a penalty on 50 minutes elected to add the points for a 20-8 lead.

This penalty turned out to be the final score of the game, however, both teams continued to attack but defences were on top throughout the remainder of the half. In the final ten minutes Otliensians searched for a try and a bonus point but the home defence remained resolute. Based on this performance, both teams look like they will be comfortable playing at this level.

With the 1sts & 2nds taking a few injuries on the first Saturday of the season, there were 14 players unavailable for the second game, & with only 14 on the team sheet on Thursday night for the 2nds. It took a few phone calls & team manager tempo managed to get the numbers up to 18, with out of contract Saracen - jock [ not the London club! ] bringing his own type of experience down the road to help ensians 2nds. Unfortunately by kickoff, they were back down to 14 with 1 running late, 2 no shows & big eddy dropping out after having to drive his car somewhere?.

wath 2nds are a couple of leagues above ensians, so it was always going to be a tough game to win, but players attitudes didn’t help the cause & the scoreline should of being a lot closer. Wath had there own difficulties & arrived with 14 so both teams played with a winger down. The wath pack were a big set of lads, so it was going to be a tough day at the coalface for the young front row of Jordan lawence & jay walsh with old hand ray drake putting the hooker shirt on again. The tenniswood twins were in the engine room, with father & son, dan & joe ridgeway in the backrow with ross nicols at 8. Lewis robinson played 9 with alex longstaff moving to play 10. Conner paley & joe tindal put on the centres shirts while dave smith junior moved to fullback meaning jock put on a wingers shirt for the first time in a long while [ did he ! ] after last weeks poor tackling display, it was high on tempos list of problems to sort, especially with wath having some big lads.

The game plan was to keep the ball moving to pull the big wath pack around & for the first 20 minutes ensians were holding there own with dave smith beating 4 or 5 defenders to score & put ensians 5 – 0 up. From the kickoff wath attacked & the big centre stepped a couple of players to find space & score under the posts to make it 5 – 7. The old experienced wath standoff started to pull the strings & 5 minutes later he kicked through & outpaced the slowest winger in town – jock to put them 5 – 12 up.

Even though ensians were still well in this game, some players attitudes changed for the worse & were more intent in moaning at the ref or anyone around them, rather than getting stuck in, & the experienced wath pack took full advantage to rub it in with another try before half time to make it 17 – 5. The half time team talk didn’t do much good & hard running forwards on soft shoulders meant wath were over the line just after kickoff to make it 5 – 24.

Alex was using ross nicols off the line outs, on his inside to pull the wath forwards in with jay & Jordan making some hard yards. Bret was taking the lions share of his line out , while joe ridgeway was throwing in, while also being openside, & his dad & matty were working hard to cover the pitch. Conner & joe were trying to find gaps in the backline, with dave smith catching & returning any ball kicked through, & after several good phases of play ross scored to make it 12 – 24 & it looked like ensians were back in the game, but wath scored from a line out 5 minutes later to stretch the score line again to 12 – 31 & the bad attitude started to creep in again with ross nicols spending 10 minutes in the bin for a cheap shot on the wath standoff, & then to rub it in wath scored again to make it 12 – 40 while he was off.

Ensians decided to try play rugby & finished with a try by joe ridgeway to finish the game 17 – 40 with matty tenniswoods 2nd conversion of the afternoon. Ensians played some good rugby & put some good phases of play together, but the attitude of a few brought the whole team down, but luckily some of the young prospects just got on with playing.