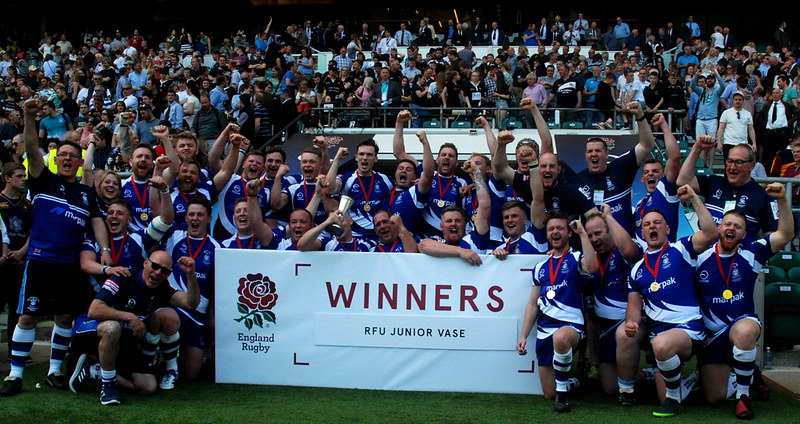 Winners are grinners, click for a limited selecton of match photos
If you want more photos then find the link to the BIG photo dump below

OLD Otliensians completed a double of promotion and cup glory when they survived a second-half comeback of Tribute Devon One champions South Molton to win the RFU Junior Vase final at a sun-bathed Twickenham yesterday. The Yorkshire Division Three runners-up seemed to enjoy the wide open spaces of headquarters to run in five tries, four of them coming in the first half. Four of the back five – full back Alex Murphy, centres Luke Cowdell and Ollie Eaves and winger Connor Bateman – crossed the whitewash, as did skipper and No 8 Sam Featherstone, with man of the match Will Cooper adding two conversions and a penalty. South Molton replied with second-half tries by scrum half Zak Stoneman and No 8 Dan Smith, with fly half Callum Stone landing a conversion and, in the first half, three penalties.

Bateman knocked on at the first opportunity when the Devonians hoisted the morning’s first up and under, and South Molton then showed their prowess in the scrums, much to the delight of their fans massed in the West Stand. However, when they opted to kick the ball downfield, Otliensians vice-captain Murphy returned it with interest from full back On their next attacking opportunity, Cowdell almost broke through in midfield but, despite the ball then going to ground, Murphy was involved again and Bateman just had enough room to touch down in the right-hand corner. Cooper’s conversion attempt hit the near upright and bounced away.

From the restart, things got worse for the All Blacks as Jeremy Darley was sin-binned for taking a man out in the air. Otliensians were soon back on the attack and Alistair Booth came off his left wing into midfield and slipped a try-scoring pass to centre Eaves, although Cooper surprisingly missed the conversion from near to the posts. Stone, having missed an earlier effort, got his team on the board with a 19th-minute penalty. Then four minutes later, Bateman was almost over on the right but was hauled down and lock Alistair Campbell could not take his one-handed inside pass.

But in the 27th minute, Bateman was involved again, this time more centrally, and put skipper Featherstone over for the third try, with Cooper nailing the conversion from near to the right touchline. On the half-hour, Stone popped over another penalty to reduce the deficit to 11 points, but nearing half-time, Murphy again showed his potency in attack, neatly judging a bouncing ball from his own kick ahead and beating two pursuers to score Otliensians’ fourth try. Cooper was bang in front his time with the conversion and made no mistake. Nine seconds were left on the clock when the restart came, but South Molton went through the phases and drew a penalty in added time when flanker Joe Armitage failed to release in the tackle. The end result was Stone’s third penalty, making the half-time score 24-9. Electricity had been an issue all weekend at Twickenham, and it came back on at half-time as witnessed by the scoreboard and stadium clock both working, and South Molton had plenty of energy themselves at the start of the second half! Replacement Sam Howard almost went over on the right four minutes in. However, the reprieve was brief as Stoneman dived over a minute later, with Stone missing the conversion. South Molton made Otliensians do some serious defending early in the second half and were in perfect position to walk the Yorkshire Division Three side’s scrum backwards, especially when prop Dan Stevens was sin-binned.

Otliensians survived the fourth-successive scrum but still could not escape being deep in their 22, and referee Callum Sharp again had to have words with Featherstone about penalties. There was no escape, however, and in the 56th minute South Molton were over again courtesy of No 8 Smith from a close-in scrum. Stone’s conversion made it 24-21 and it was definitely game on. Rob Lofthouse and Nick Keinhorst had come on earlier in the half, and Otliensians needed a foothold in the South Molton half and finally got it on the hour when a sniping Lofthouse run brought another yellow card as replacement Robert Kift was sent to the sin bin for a high tackle on the replacement scrum half.. This shift in emphasis was crucial, and now Otliensians had a bit of momentum and a try was ruled out in the left-hand corner but Ensians, with a man advantage, had got the nudge in the forwards as the match kicked on towards 70 minutes. But it was in the backs that they profited as Murphy again came into the line and gave Cowdell an attacking chance, with the centre brushing off a powder-puff weak tackle to score in the left-hand corner in the 70th minute. Cooper’s conversion never threatened the posts but, eight points to the good, Ensians won a penalty and, knowing that a kick would eat into the time remaining as well as giving them three points, Cooper stroked the ball over in the 75th minute to extend the margin to 11 points.

South Molton then kicked an attacking penalty dead and, with only seconds remaining, Ensians won a penalty just inside the South Molton ten-metre line and although Cooper missed, the match was over seconds later when the Devonians were pushed into touch on their right. 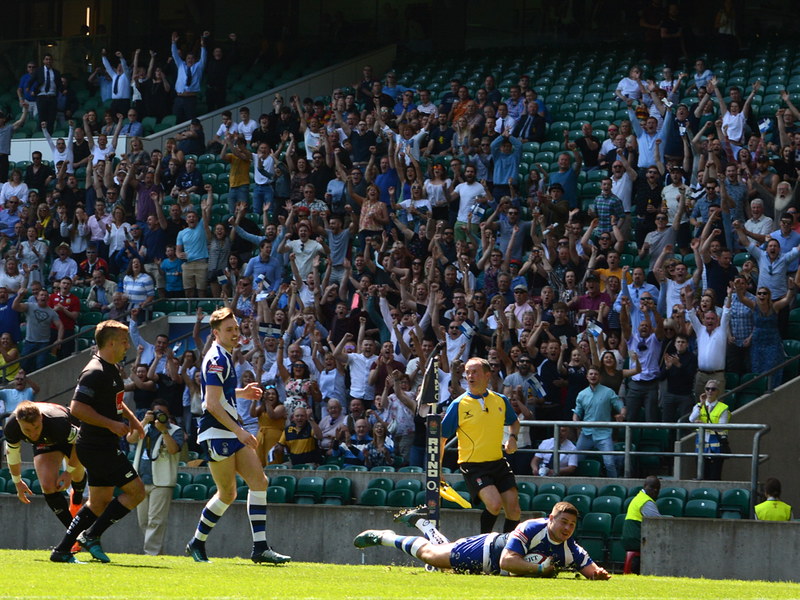 Ensian fans celebrate as Luke Cowdell goes over for the decisive last try
Click for a limited selecton of match photos,there are more in the BIG photo dump below

From the web, press & photo agencies

Telegraph and Argus, By George it's a great day for Otliensians

"ickledot, pictures of people doin stuff", a Pro photographer at the final (£'s)