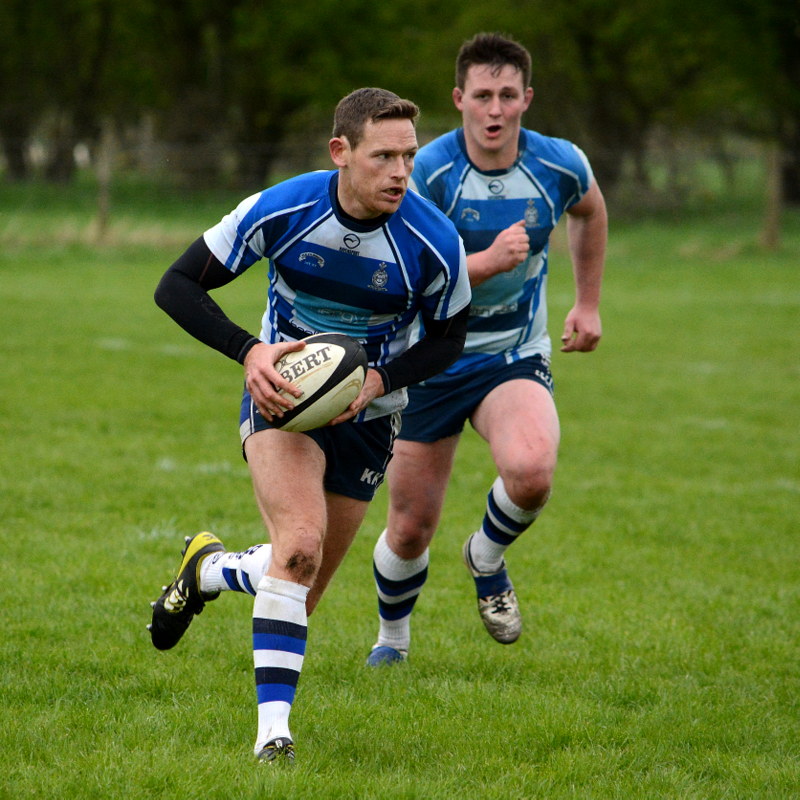 Old Otliensians entertained Skipton in a rearranged match the original game having been postponed due to frost .This was the home team's final league game of the season .It was a chilly afternoon but the pitch was in good condition and ideal for open play.

For the first 15 minutes play was inconclusive even though the home team had territorial advantage. However on 15 minutes following a penalty kick into touch Skipton kicked on a loose ball confusing the defence and a quick burst through enabled the visitors to take the lead with an unconverted try. The next 10 minutes saw play taking place between the two 22 metres lines with neither side in the ascendancy.

For the first time in the game 'Ensians took the initiative on 24 minutes with a fine move the ball passing from one wing to the other where winger Luke Cowdell made good ground before cutting inside and passing to Olly Eaves who sliced through the grasping Skipton defence to score a lovely try between the posts converted by Will Cooper who also scored a penalty goal 4 minutes later to give the home team a 10 points to 5 lead.

The home team began to play the expansive game we have come to expect but the Skipton defence held and when the visitors were awarded a penalty on the brink of half time kicked a great penalty goal from 40 metres giving a half time score of 10 points to 8.

'Ensians opened the second half with increased vigour after their rather quiet first period .After only 4 minutes play moved into the visitor's 22 ,and a neat break by Kristian Keinhorst followed by a clever back pass to Joe Armitage ,enabled the latter to crash over for a try converted by Will Cooper . The home team continued to press with Matt Taylor and Ali Campbell to the fore and after 10 minutes Luke Cowdell hammered his way over to score a try converted by Will Cooper to make the score 24 points to 8 .Not to be outdone 3 minutes later Skipton broke through the home defence to score an unconverted try (24-13).

Three minutes later it was 'Ensians turn again. From a quickly taken penalty the ball sped to Will Cooper who scythed through the complete Skipton defence with a superb 35 metre run to score the try of the match his own conversion hitting the upright (29-13) It was the visitor's turn again when sloppy defence by the home team allowed a strong Skipton forward to get a head of steam and storm over the line for a converted try. (29-20).

Despite their defensive failings 'Ensians ' attack was in great form .A lovely move across the whole team saw Sam Featherstone inches short and after 25 minutes Joe Armitage forced his way over from a tap penalty converted by Will Cooper .(36—20) The forwards took the next scrum ball against the head and Rob. Lofthouse made a quick break continued by Paddy Phipps. Then on 30 minutes Matt Taylor dived over for an unconverted try (41—20). Not to be outdone Skipton came back and powered over for an unconverted try giving them the bonus point which virtually ensured safety from relegation.

Now in injury time Rob Lofthouse and Kristian Keinhorst who were combining really well engineered a flowing move across the backs for winger Nick Hesketh to sprint over for the final try of the game followed by a brilliant conversion by Will Cooper ,who had certainly had his kicking boots on, to make a final score of 48 points to 25 in favour of Otliensians.

It had been an entertaining game for the spectators to enjoy ,both teams playing good rugby, and with hopefully with no injuries 'Ensians will go to Twickenham next week for the final of the National RFU Junior Vase against South Molton from Devon in good form with no selection worries.