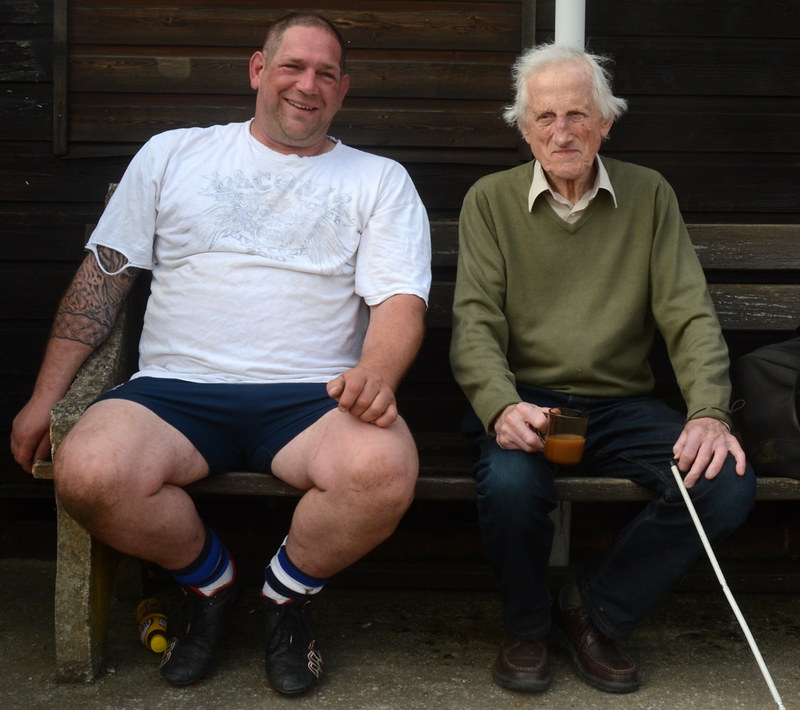 On a warm sunny day with a stiff breeze Stocksbridge arrived with their usual band of supporters knowing that with their team propping up the League, certain relegation was facing them. Despite this, they made life for the home side difficult at times as they fought back bravely to run in two consolation tries in the second half.

With forwards heavier and taller than the hosts, the visitors set about ‘Ensians through their pack with a series of pick and drives which pinned the home side back in their 22. This battle to cross the line lasted over 15 minutes, fully stretching the home defence and at times it seemed their big forwards must go over. However, the hosts’ organised defence with low, hard tackles kept them out and the pressure eased with a clearance kick from fly half Kristian Keinhorst.

When the home side eventually got their hands on the ball, a slick dummy from Keinhorst moved play into the visitors’ half and, from a lineout, ‘Ensians drove towards the line. The ball was quickly re-cycled, and a pop-pass gave centre Luke Cowdell space to jink his way through on 23 minutes. The conversion failed giving the home side a 5 – 0 lead.

Despite being outweighed, the home pack with their front row of Dan Stevens, John Offer and Toby Keep were able to drive the opposition back so that any ball they got was a nightmare for their half backs. The home back row of Paddy Phipps, Rob Arbuckle and skipper Sam Featherstone caused big problems for Stocksbridge as they tried to move the ball wide. Handling mistakes gave the hosts chances to mount a series of attacks with forwards on hand to lend support and, when a gap opened up, Sam Featherstone nipped through to score near the posts. The conversion by Kristian Keinhorst stretched the lead to 12 – 0 on 30 minutes.

A lineout after a clearance kick from the visitors saw the home side gain possession through Sam Featherstone and when the ball reached centre Luke Cowdell on halfway, he cut inside and set off on a powerful weaving run. Despite the cover coming across, he ducked under tackles and dived over for a superb individual try in the corner. An excellent conversion by Kristian Keinhorst increased the lead to 19 – 0 on 34 minutes. Three minutes later the hosts were back in the visitors’ 22 through good drives from locks Matt Taylor and Ali Campbell. From a scrum near the line, the home pack drove over for No. 8 Rob Arbuckle to touch down for the bonus-point try. With a failed conversion, the score was 24 – 0 at half time.

Playing with the breeze after the break, the hosts carried on where they left off and on 44 minutes scrum half Rob Lofthouse broke away up the left touchline with a defending winger hot on his heels. He was grabbed just before the line, but his momentum took him over for a fine try. With the conversion failing, the hosts led 29 – 0.

With several players coming off the bench and resulting positional changes, the home scrum was holding its own, but no longer enjoyed the dominance of the first half. The visitors used the cleaner possession to come more into the game and good driving and support from their forwards took play up to the home line. The defence held as the ball was moved left and then right, but a gap appeared and the visitors went over for a well-worked try. The conversion narrowed the lead to 29 – 7. With their tails up, the visitors continued to attack and they were rewarded with a second try on 58 minutes with the conversion taking the score to 29 – 14.

The hosts settled and continued to spread the ball wide and they were soon back on the scoresheet as winger Nick Hesketh dived over in the corner taking the score to 34 – 14 on 63 minutes, the conversion failing. With the hosts continuing to attack, a slick move up the left flank involving centre Ollie Eaves and flanker Paddy Phipps saw stand-in centre Josh Smith cut inside to score under the posts, but unfortunately play was called back for a foot in touch.

Both sides continued to attack, but defences held to leave the final score at 34 – 14. After Stocksbridge had subjected the home defence to a severe battering in the first 20 minutes, ‘Ensians were able to produce good flowing rugby to earn a bonus point by halftime. Changes after the break gave the visitors chances before the hosts settled down and exerted control.

‘Ensians face Skipton at home next week in their final game before the trip to Twickenham on the 6th May. Local support for ‘Ensians in the National Vase final has been impressive and to date four coachloads of supporters are heading down the M1. Tickets for the bus at £25 are still available through Ben Featherstone – Mob. 07979 105085. 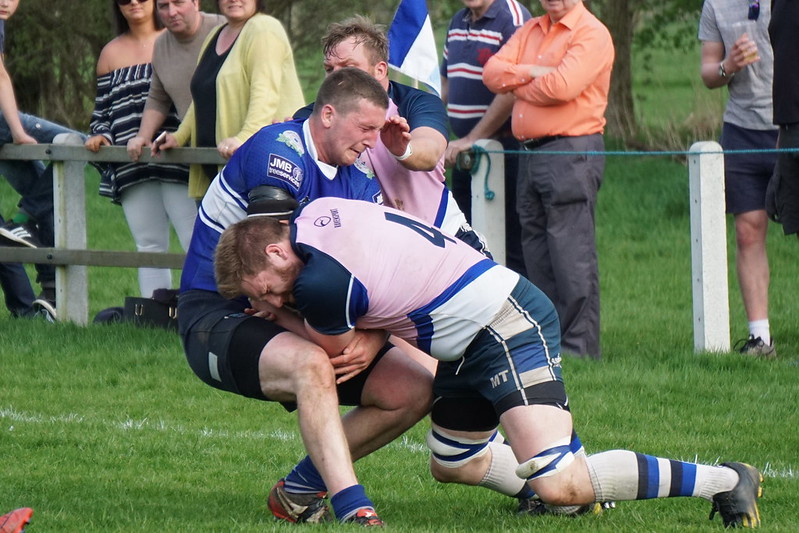 Click, for even more photos from the game by John Eaves
There are a couple showing that controversial line call