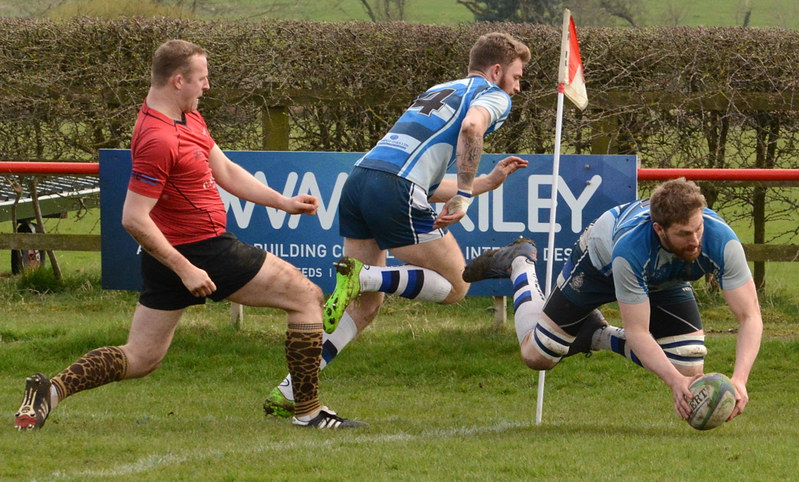 Dinosaur comes to mind when I am writing about squad rotation, sponsorships, Twickenham and promotion, for we knew nothing about those sort of things long ago, but it is exciting and stimulating trying to keep pace with the tide sweeping the ‘Ensians along at the moment.

It is difficult, if not impossible, for players to avoid being influenced by such distractions and the game against Skipton reflected in part the lack of focus on the immediate. To secure the bonus point with not four, but five tries cannot be carped at, but to let in four tries and almost put the win in jeopardy was disappointing.

The bench is a contentious issue at all levels and on Saturday the use of all the subs, whilst understandable in managing the squad as a whole, did little for continuity and consistency. However, promotion was secured by the score line and other results. Wholehearted congratulations are well merited and the applause is loud.

A warm, still afternoon on a wide pitch in great condition promised much and indeed there was plenty of endeavour and running rugby. Baildon’s fog, wet and floodlights seemed far away.

Once again, the opposition enjoyed possession and territory for long periods, but unlike previous weeks when ‘Ensians kept opponents at bay, Skipton very nearly pulled off a real turnover. All credit to them for persistence, willingness to run and commitment to the tackle. The distance separating the teams in the table was not evident at all.

‘Ensians took the lead after only 5 minutes with an unconverted try from number 6, Matt Taylor, after a good handling sequence, but Skipton came back with their own try on the 1/4 hour following sustained pressure on the visitors’ defence.

Skipton are a big side and were using it well, causing their opponents to drop off the first couple of tackles and so breaking the gain line and more. ‘Ensians needed to compose themselves and almost succeeded with what looked like a clean break to the posts, only to be called back for a (dubious) crossing offence. 7 points there would have been timely at the 20 minute mark.

Alex Murphy made a great run and perhaps could have turned the ball inside when an outside pass went begging and a chance was lost. However, Murphy’s running was causing problems for the hosts and secure handling/ball retention soon led to a try for Ali Booth far out.

10:5 was “alright” but more was required and when Skipton were yellow-carded for a high tackle, the visitors had the advantage. Jack Smith & Ali Campbell were prominent in the line out and whilst Skipton were still a threat, ‘Ensians managed to keep them out “at the death”.

The hosts lost a turnover, Olly Eaves kicked ahead, Booth gathered, fed Eaves who returned the pass to put Booth over. Half-time came at 15:5.

Two tries and a conversion against the hosts’ three plus one conversion is a pretty accurate reflection of the second half play, with Skipton throwing everything at it and being duly rewarded. ‘Ensian yellow cards didn’t help, but Tom Howard (for the bonus point) & Connor Bateman went over and the latter was back to kicking duty for the last one.

Promotion and the Club dinner on the same day has a certain symmetry; exciting times! 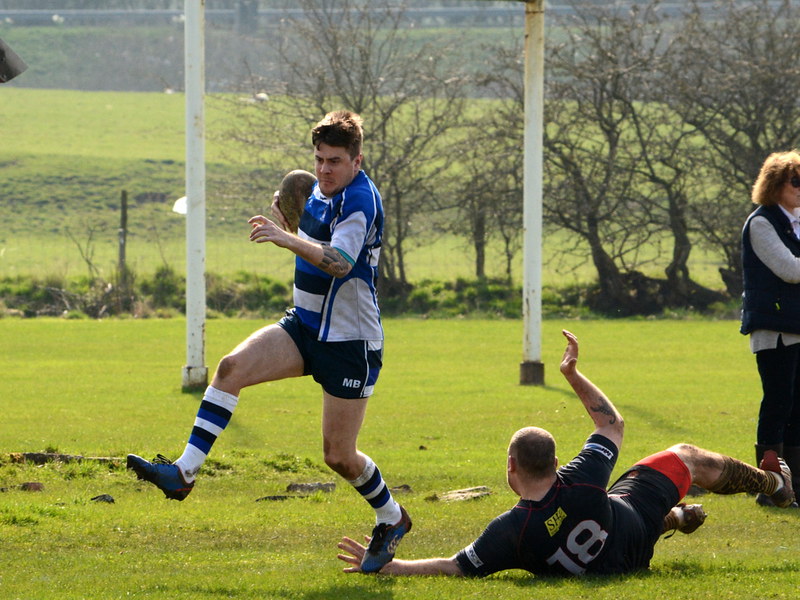