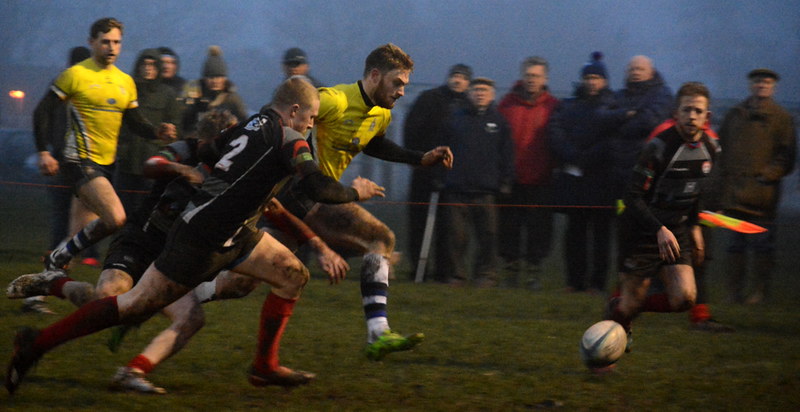 Catching up with postponed matches due to bad weather resulted in ‘Ensians taking on local rivals Baildon in this re-arranged evening match under floodlights. With the home side lying second from foot of the table and battling to avoid relegation, the visitors knew a tough encounter was on the cards. On a greasy surface in swirling fog this turned out to be the case as the hosts fought back in the final minutes to earn a useful bonus point.

With five first XV regulars missing due to injury and unavailability, the visitors started off brightly with half backs Rob Lofthouse and Will Cooper moving the ball wide from the outset they made good progress down the slope. Cooper converted a penalty on 5 minutes only to see Baildon level the scores at 3 – 3 five minutes later when their pack drove into the visitors’ 22.

As the visitors mounted a flowing back move down the right flank, full back Connor Bateman came into the line to score a fine try in the corner. The conversion failed, but the visitors now had a lead of 8 – 3 on 15 minutes. The home pack had a solid lineout and their driving and offloading frequently made good ground, but in the scrums the visiting front row of Toby Keep, John Offer and Michael Groves had a slight edge. Despite the conditions, the visiting backs were moving the ball well and a half break by centre Ollie Eaves set up a second try for Bateman half way out. With no conversion the visitors’ lead was stretched to 13 – 3 on 25 minutes. The remainder of the half saw both sides produce some good attacking rugby with defences holding out.

In the second half the visitors lost experienced scrum half Rob Lofthouse through injury and fly half Kristian Keinhorst stepped into the unfamiliar role. With other changes in the pack and playing up the slope, ‘Ensians lost some of their fluidity and they had to defend numerous threats as the hosts came more into the game with forwards and backs working well together. With replacement Dom Oddy linking well in the centre, strong running by the visitors took play into the home 22 where an infringement gave Will Cooper the chance to stretch the lead to 16 – 3 with another successful penalty on 50 minutes.

Both sides continued to attack with the visitors making good use of clean lineout ball from skipper Sam Featherstone. Baildon were beginning to disrupt the visitors’ scrum and Kristian Keinhorst had to deal with untidy ball whilst up against close attention from the home back row. Play continued to be even, but with the clock ticking, the home pack put in a series of strong drives into the visitors’ 22 where quick ball produced a well-worked try half way out. The successful conversion closed the gap to 16 – 10 as the final whistle went.

This was a well-earned win for a much-changed ‘Ensians side, but credit must go to Baildon who kept going to the end with the reward of a valuable bonus point.