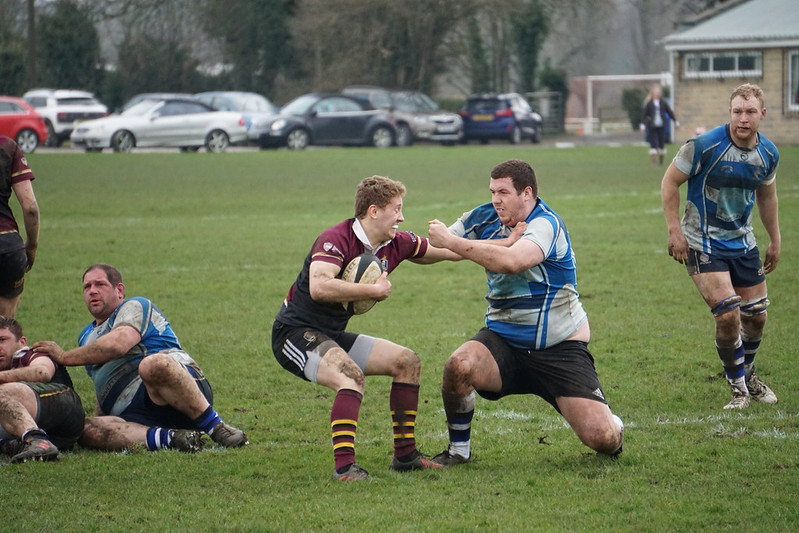 Click, for more photos from the game (supplied by John Eaves)

After the euphoria of the Vase semi final & a rather awkward mid-week Aire Wharfe cup match, Old Otliensians were back to the day job of maintaining their promotion run when they entertained Leeds Medics last Saturday. Taking lessons from an away defeat earlier in the season, the home side clearly had a game plan in place for the return. A win was a basic requirement!

Two fine, dry days gave way to some Saturday rain which, although not heavy, was enough to perpetuate what have become tiresome playing conditions. However, the ground stood up well, the rain stopped and there was much running rugby endeavour from both sides.

Three tries & two conversions in the first half without reply meant that the game was secure, save for a Sale-like comeback from the Medics. The second stage was evenly contested, with no further change on the board until the 35th minute. Try as they did, Leeds were denied any score by resolute defence from the ‘Ensians. These days, players are allrounders, with front row forwards running, passing and tackling and fly halves /threes defending for their lives as well as getting involved in rucks and mauls. There were mistakes of course, with no box-kicking, rather backs running the ball from deep and both teams left points on the pitch. The feeling, though, was that the home side made sure of the win by determinedly denying the visitors any chance of getting into the game. A very professional performance from second in the table.

Medics ran strongly in the early stages, but spoilt things by not looking after their possession, giving ‘Ensians scrum ball or penalty and so allowing ball and territory to the home side. From such a clearance, the hosts could have scored, but were held up over the line. Sam Featherstone was soon prominent in the line out and it was his team which dominated for a period. Rob Arbuckle ran hard and fly half Will Cooper interplayed with hand and boot. From a driving maul from a line out, Jack Smith found the line and 5 points were fair reward after some 15 minutes of play. Play swung from left to right and vice versa as the home forwards were good at the breakdown and gave Cooper a supply of front-foot ball. ‘Ensians on top after 20 minutes, with Medics looking dangerous with ball in hand, but unable to avoid crucial mistakes in the face of a solid, determined defence.

Pressure from the hosts pinned Leeds on their own line and the latter persisted in trying to run out of defence, making costly mistakes in the process. An ‘Ensian penalty saw a scrum option, ball lost and then regained and from a Cooper dummy/outside break, a well-timed pass put centre Eaves over by the posts. Cooper’s conversion moved the board up to 12-nil at the half hour mark. Medics enjoyed a period of possession and moved the ball through their threes, but simply failed to finish off and so remained scoreless. The home side were able to pressure them and forward passes and handling errors were frustrating Leeds. From a promising three-quarter move by Medics, a pass was too high and was headed by the would-be receiver into ‘Ensian hands. Inter passing finally found centre Luke Cowdell with an easy 15 metre run-in to the posts. Cooper improved and a half time score of 19 to nil was satisfying to the home side, if disappointing to the visitors.

The second half was a somewhat strange affair; both teams had plenty of ball, both teams tackled resolutely, both teams made mistakes, there were penalties galore and nobody had points to show for it until in the 30th minute, when ‘Ensian pressure eventually led to space for Eaves, who ran hard and timed his pass perfectly for Featherstone to cross unopposed under the posts. Cooper, who had a good match (and a very creditable tackle count), added the conversion to bring the final tally to 26 unanswered points. The half time lead had been carefully preserved, with Medics allowed no way back and an almost pragmatic bonus try from the hosts to maximise the win. The skipper and Ali Campbell were dominant in ‘Ensians line out, Paddy Phipps prospered in the 6 shirt, but the squad overall made sure that the path to promotion remained on course. The “finishers” all made a difference and with the return of some who were missing yesterday, all looks in good shape. The hope is that Rob Arbuckle’s departure after 25 second half minutes proves not to be serious.

Baildon under lights on Wednesday next ensures that there is no let-up!