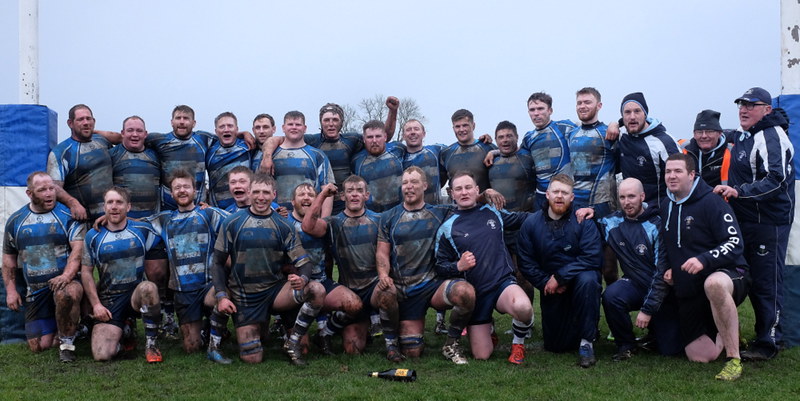 THE lights may have gone out in the changing rooms and the showers after this RFU Junior Vase semi-final but the lights on Old Otliensians' Twickenham dream are still shining brightly.

The Staffordshire side, who have already been promoted, twice came within a converted try of defeating Ensians, but were then held at arm's length.

"You are a bit nervous beforehand because we didn't know very much about them but the focus all week in training has been about treating it as just another match, and in the first 20 minutes we found out what we had to do.

"They did stick at it for 80 minutes, but our forwards set the platform and allowed our backs to play, and we can beat anyone on our day.

"The penalty that we kicked in the second half meant that they had to score three times and our defence was superb."

Ensians now play Tribute Devon One leaders South Molton in the final at Twickenham on Sunday, May 6, and the Otley club could have wrapped up promotion themselves by then.

Stafford said: "We need to win three of our last six matches, and face Leeds Medics & Dentists at home next Saturday, Baildon away on Wednesday, April 11 and Skipton away on Saturday, April 14, who are all in the bottom six.

"We could be promoted by mid-April, which would give us three weeks to prepare for Twickenham.

"There is also the Aire-Wharfe Cup, but we are now likely to play what is largely a second team in that, plus some fringe first-team players."

Rain late in the week meant that a contingency plan to play on the artificial grass pitch at West Park Leeds was put in place, but happily for what proved to be a crowd of over 450 and record bar takings, the semi-final went ahead as scheduled at Chaffers Field on what was an understandably heavy pitch.

The gut feeling was that Ensians would win, especially as Yorkshire have such a great record in the competition, and nothing that happened in the first ten minutes put that in doubt.

A break by fly half Will Cooper sent full back and vice-captain Alex Murphy over in the fourth minute, and flanker Paddy Phipps scooted over six minutes later, although Cooper was unable to convert either chance.

Eccleshall, who had prepared for the match with a lunch-time training session at Leeds Modernians, finally got a foothold in the match in the 15th minute via successive penalties, and they kicked to the right-hand clubhouse corner, only for Ensians to pinch the line-out.

Phipps, who only moved from the front row in January in the derby at Aireborough, made another strong break in the 20th minute, but centre Luke Cowdell kicked the ball out on the full to dampen home hopes.

Eccleshall's passing was sometimes too intricate for the conditions, but having gone close in the clubhouse corner in the 27th minute, they switched play to the opposite corner, where winger Andy Whieldon went over.

Centre Sam Ward had some difficulty placing the ball on the kicking tee for the conversion attempt, and eventually rushed it, hooking it wide after being barracked by home fans and possibly given the hurry-up by referee Tim Allatt (Midlands Society).

However, the hosts ended the half strongly, with Cooper slotting a 33rd-minute penalty after the visitors were offside, and the Eccleshall pack were then second best as hooker Tom Howard got on the end of a pushover try in stoppage time to give Ensians an 18-5 half-time advantage.

It was vital for Eccleshall's hopes that they got the first try of the second half, and they managed it after 47 minutes via Ward, who also converted his score, but not before Ensians had been pulled up for a forward pass when they looked on course for a fourth try themselves.

At only 18-12 behind, it was definitely game on, but Ensians, buoyed by a triple substitution after 53 minutes, including club legend Rob Arbuckle, again showed their prowess in attack and then defence.

Flanker Joe Armitage scored their fourth try after 62 minutes and then the green kit of Eccleshall swarmed over the three shades of blue of Old Otliensians.

But, try as they might for the last 15 minutes, they could not break the home rearguard, and, just to make sure that Yorkshire would be putting in yet another appearance on RFU Club Finals Day, Cooper slotted a 74th-minute penalty to put Ensians three scores ahead.

Eccleshall were supposed to have played six matches to reach this stage (compared to Old Otliensians' three) but received two home walkovers.

Skipper James Denning said of Otliensians: "They were the best side that we have faced this season, they were good from one to 22 and we weren't able to implement our game-plan of keeping it tight in the forwards, but we showed great character to keep on going."

It was not surprising on a day when Otley Town Football Club had to be used as an overspill car park that there were record bar takings at Chaffers Field, and thoughts doubtless turned to Twickenham during the evening and that meeting with 'Mighty Molton'.

Maybe that record income was responsible for the tweet on Old Otliensians' site: "Sorry I've forgotten the score but @Otliensians have beaten @eccleshallrugby in the RFU Vase semi Final."

Joe Armitage on his way to the try line, Click for more photos from the game