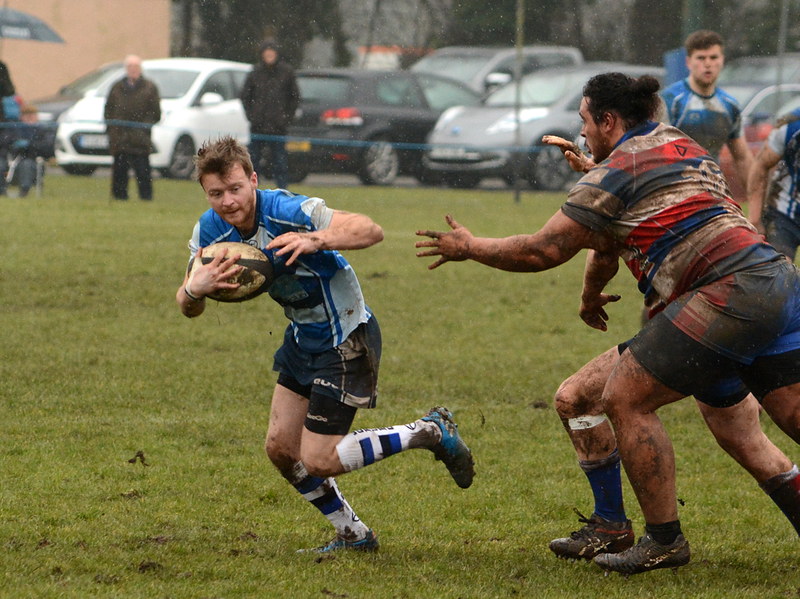 Despite snow during the week and heavy rain overnight the pitch although understandably wet was in surprisingly good condition for the visit of a Castleford team which had had some good results in recent weeks.

There was no wind and in the early stages play was even between the teams although tending to take place in the visitors' half. As the match progressed 'Ensians were on top in the scrums and despite doing their best to open up play the Cas defence was up to the job. However after 15 minutes good ball was delivered to Will Cooper who gave his opposite number a glorious dummy to score a try beneath the posts converted by him to make the score 7 points to nil.

The next 15 minutes saw the home team camped in the Cas half with some good offloading and hard forward play but the visitors' defence was equal to it. When Cas did get the ball they used their forwards to drive forward hard but good tackling by Paddy Phipps and Joe Armitage in particular kept control. 'Ensians came close on two occasions ,once when a forward drive took them to within inches of the line and also when a break by Olly Eaves was followed by a sprint by Nick Keinhorst who was pulled down just short of the line. From an 'Ensian point of view the only hiccough was when a Cas back made an interception but with the line at his mercy he was called back for off side.

The Visitors moved into the home half with the aid of a penalty and this time it was 'Ensians turn to defend but a bullocking run by Rob Arbuckle helped to relieve the pressure and half time came with the score 7 points to nil.

The second half followed the same pattern as the first with defences mainly on top although the home team was in charge of the scrums and lineouts where Ali Campbell and Sam Featherstone were having outstanding games .The play was , however generally scrappy with much forward action interspersed with the home team trying to get their backs into the action from time to time. Rob Arbuckle was really enjoying the play with hard drives and tackles and giving the Cas defence much to think about.

For 35 minutes the home team enjoyed a majority of possession and also territorial advantage but with nothing to show for it. Then following a well taken penalty by Will Cooper and good lineout ball both Joe Armitage and Sam Featherstone went agonisingly close to scoring.The resulting scrum was pushing the Cas pack backwards towards the line and when the ball was released scrum half Rob Lofthouse neatly jinked past the defence to score an unconverted try making what was to be the final score of 12 points to nil.

This was a hard fought generally scrappy win by 'Ensians against tough opposition and with other results going their way gave them a little more leeway in their push for promotion.

With the 2nds not having a game for a month, team manager tempo was desperate to get a game on, even though snow threatened to spoil the day again & numbers were down. On Thursday nights selection meeting, names were mentioned / texted / rang who had long gone, & come Saturday afternoon, 18 players turned up at bingley to play a young, very well organised bees 2nds who had a team & a half warming up. On the other hand, tempo had spent Saturday morning trying to keep boothy out of the pub after a night at the casino, & birthday boy big eddy from cracking the cans open while getting changed!. x first team hooker, rob lyon put his boots on after probably 4 years out, & ross nicols played his first game after returning from travelling the world. The pack was solid with bonner, lyons & boothy in the front row with the tenniswood twins in the engine room. Ben jones played 6 while dave smith junior moved from wing to 7 with young ridgeway absent. Ross put on the 8 shirt with father dan away, while joe tindal moved from the backs to scrumhalf. Dom oddy moved to standoff, while daz cooleys mate, matt [ who usually plays for aireborough ] pulled on the 12 shirt, with alex [ the shoulders ] bayfield late. Daz started at outside centre with mick birts on one wing & Jamie Kenworthy putting on a rugby shirt again on the other. Conner paley had another solid game at fullback after a few weeks out. The bench was eddy, bayfield & paul tosney [ who tempo had forgotten to pick up, so he had to make his own way their! . on paper, ensians didn’t have a cat in hells chance of winning this game but with tempos cunning plan, – don’t give them the ball at all cost !! [ with no coach Harrison about ] it was damage limitation. Ensians started with the ball & oddy was using matt as a battering ram, but bees tackling was text book. Unfortunately ensians tried throwing it wide where bees were at their strongest & turnovers were conceded with the young fit bees players like flies round a cow pat. with oddy off with a bloody nose & no subs at the time, ensians went down to 14 & bees made them pay to score & convert on 7 minutes. From the kick off, bees went on the attack, & with the lightening quick fullback finding space it was 14 – 0 with barely another minute on the clock. Tempo went through the game plan again, - slow it down, play at our pace & don’t get isolated or the ball would be gone ! the line outs were starting to come together with rob finding his old form & the ensian scrum was dominant, but with bees swapping players quicker than will Howarth does girlfriends !, fresh legs made a difference & a kick chase ended with a try with 15 minutes on the clock. Ensians though were starting to click & put phases together & it was bees turn to defend, but poor kicks gave them chances to run in space & with good hands in the poor conditions & lots of pace it was 24 – 0 by half time. The half time team talk was – anything in the 22, get into touch asap. Any kicks have to make touch, maul & scrum them to death & score 1 try . the 2nd half started well for ensians, but another turnover put bees on the attack & the new prop went over in the corner with 7 minutes played to make it 29 – 0, but the tide was turning with the pack taking balls against the head at most scrums or pushing bees of it, & great driving mauls from the lineouts. Alex & matt in the centres were keeping it closer to the pack & alex went over for a deserved try with 20 minutes being played to make it 29 – 5. The last 20 minutes was mainly the ensians pack taking it to bees & any knock ons or mistakes meant it was another scrum which had boothy, rob & bonz smiling ear to ear. A couple of penalty tries could have been given with the bees scrum going down time after time while getting marched over the try line, with captain for the day big eddy arguing ensians case, but the ref wasn’t having it. It would of put a more respectable look to the score board but the best team won, although a very good performance from an ensians team with many changes & many players playing out of position, against a very good bees team who have only lost three all season.