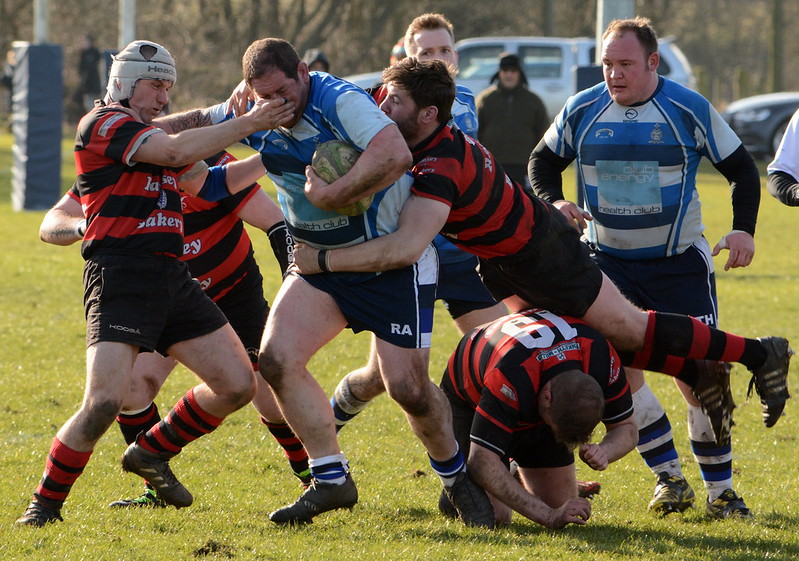 Despite recent cold weather it was a bright sunny afternoon and the pitch was in perfect condition for the Rfu Junior Vase quarter final against Ramsay (I.O.M.) For the first half the home team was playing against a light westerly breeze The Home team attacked from the start gaining a penalty after only 2 minutes neatly slotted over by Will Cooper and after 15 minutes he kicked another one to make the score 6 points to nil.

Not to be outdone Ramsay mounted a strong attack but a fine relieving kick by Nick Keinhorst saved the day.'Ensians' scrummaging was of the highest order pushing the visitors' pack metres backwards on occasions combined with delightful expansive play from the backs which was countered by fine defensive work by the Manxman. However after 32 minutes a break was made by Alex Murphy on the visitor's 10 metre line, he passed to Nick Keinhorst who raced towards the line only to be tackled a couple of metres short. The forwards were quickly in attendance and after a few hard phases, the home team was awarded scrum 5 metres from the line. The scrum powered forward resulting in a penalty try for' Ensians (13 –0).

It was now Ramsay's turn to mount an attack and with the aid of a penalty came within 10 metres of the home line .Despite a good relieving kick the visitors came back again to within 5 metres but their firm efforts came to nought as the home defence held. After 37 minutes superb lineout ball from Ali Campbell gave the backs room to open the ball across the line but winger Ali Booth was tackled just short of the line .A scrum ensued and 'Ensians pack was grinding forward when they were awarded a further penalty try .The front row of any three from Dan Stevens ,Tom Howard ,Josh Dyson and Toby Keep had, with the help of the rest of the pack, given the Manx pack a torrid time .and at half time the score was 20 points to nil.

The breeze had picked up and turned round giving the 'Ensians a head wind for the second half. However the forwards were in control with Sam Featherstone and Ali Campbell prominent in the lineouts and slick passing across the backs.

In what proved to be the defining period of the game Ramsay had their say in proceedings and from a neat chip by their scrum half they gained a 5 metre scrum .They came desperately close to scoring from the subsequent moves but the final pass went astray and the chance was lost. They continued to attack and after 15 minutes opened their account with a penalty goal. Just 2 minutes later Olly Eaves gave a dummy to give a half break and racing diagonally towards the Ramsay line gave a perfectly executed back pass to Luke Cowdell who powered over to score near the posts converted by Will. Cooper to increase the home lead to 27 points to 3.

Then after 22 minutes Luke Cowdell again came close, followed by a scrum near the line resulting in a pushover unconverted try by Rob Arbuckle who was having a powerful afternoon. Ramsay still had something to say in the game ; a good move took them into the home 22 and despite a relieving kick by 'Ensians the powerful Ramsay winger broke through 3 tackles and charged 50 metres into the home 22 before he was brought down.. Play was even for a while but with a couple of minutes to go 'Ensians achieved a scrum near the Ramsay line, but, spurning the chance of a pushover try opened the ball neatly across the backs for winger Nick Hesketh to sprint the last 15 metres outpacing the defence to score an unconverted try wide out This gave a final score of 37 points to 3.

This had been a good match with hard forward play expansive back play and good defence from both Otliensians and Ramsay ,both the teams and the referee ensuring that the supporters had an attractive and exciting game to watch.

'Ensians now move forward into the semi final to be played at home on Easter Saturday 31st March 2018.