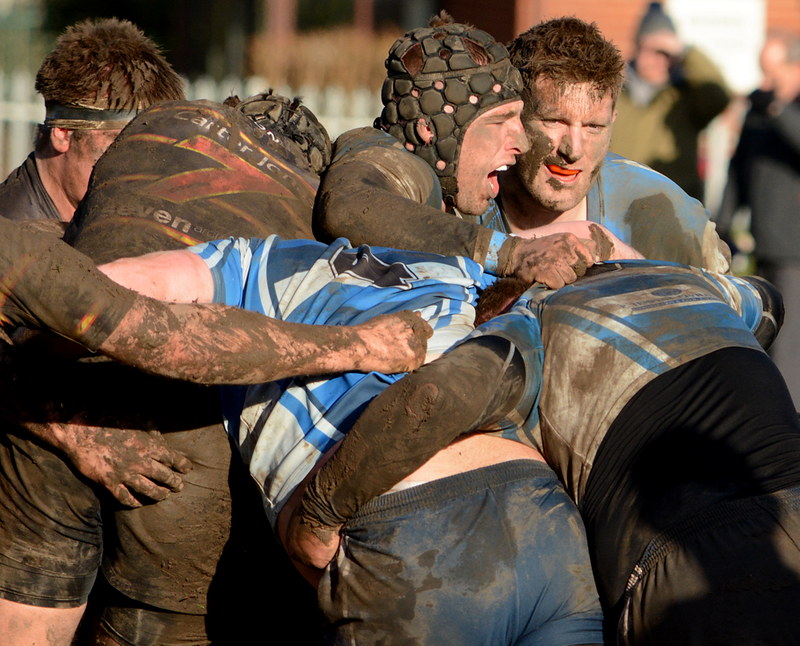 As a team which likes to play fast open rugby, ‘Ensians arrived at Python’s ground to be faced with the unwelcome sight of a pitch half covered in thick mud with the rest of it very soft underfoot. Luckily the rain had stopped in the morning and blue skies would hopefully help conditions improve.

Gathering the kick off the visitors drove into the muddy home 22 area and through their pack, set about attacking the home line. When progress was halted half backs Jacob Wragg and Kristian Keinhorst moved the ball to their backs, but the sticky conditions took the pace out of any move.

The hosts defended well and eventually got into the game after fifteen minutes with some good driving play by their big forwards and strong running by their backs. As they entered the visitors’ half a stray pass was intercepted by winger Nick Keinhorst who set off for the line. The Pythons’ cover was quick to respond and, with conditions not helping, the chance came to an end in the home 22.

Facing a bigger and heavier pack in the scrums, the visitors were unable to get decent footholds and struggled to get clean ball, with the hosts pushing them back on occasions. With their short passing game and good support play, Pythons made steady progress into ‘Ensians’ territory. A penalty attempt fell short and they never really threatened the visitors’ line. The visitors managed to hold their own in the lineout through Sam Featherstone and Ali Campbell.

On 30 minutes the visitors suffered a setback when lively flanker Joe Armitage had to leave the field after a heavy knock to be replaced by Rob Arbuckle. The visitors came back with some good driving and offloading through Paddy Phipps and Sam Featherstone with good support from locks Matt Taylor and Ali Campbell. The home side’s defence was solid and half time arrived with neither side managing a score.

With a slight slope in their favour the home side kicked off into the muddy part of the field and used their heavier forwards to pick and drive their way into the visitors’ 22. Penalties were conceded as the visitors produced a sound display in defence and although Pythons got within a few yards of the line, strong low tackles kept them at bay.

After being under pressure for the first 15 minutes, the visitors gradually worked their way up to the less muddy part of the field. Rob Arbuckle was bouncing defenders off and, along with props Toby Keep and Josh Dyson, the visitors made the best of the firmer conditions to make progress into the home half. The hosts infringed outside their 22 and centre Luke Cowdell converted the awkward kick to give the visitors a 3 – 0 lead on 58 minutes.

With assistance from the firmer surface, the visitors were at last able to get their back line moving and a sweeping move along the right flank put winger Ali Booth away. As the cover came across he chipped ahead and just managed to beat a defender to the touchdown in the corner. Luke Cowdell added the extras with a fine conversion to stretch the visitors’ lead to 10 – 0 on 66 minutes.

Pythons made a spirited comeback through sound handling and good driving, but the ‘Ensians’ defence was up to the task as they stifled any threatening moves. For their part, the visitors moved the ball well but further scoring opportunities were few. There was a setback when centre Ollie Eaves received a back injury with Nick Hesketh coming on as replacement and Rob Lofthouse taking over the scrum half berth. The remainder of the match was played out with neither side managing to create chances.

In the muddy conditions with their taller, heavier pack, Pythons had an advantage, but ‘Ensians were up to the task. In dreadful conditions, their spirit and hard, low tackling carried the day in this hard-fought victory.

Next Saturday ‘Ensians are at home to Ramsey from the Isle of Man in the quarter-final of the RFU National Vase competition. To help Ramsey with their travel arrangements, the kick off will be at 1 pm.