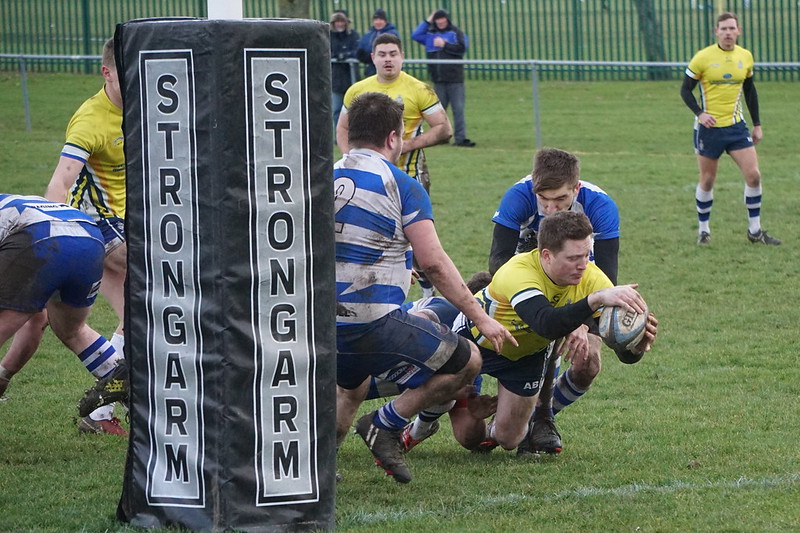 In the second of the North Division pool games of the RFU National Vase ‘Ensians travelled North East to face West Hartlepool Technical School Old Boys. On a big pitch with the going soft underfoot and a biting cross-field wind, the visitors quickly got into their stride with their pace and power dominating for much of the match.

From the kick-off ‘Ensians worked through the phases until a careless pass enabled the hosts to intercept and mount a brief counter-attack. Sound tackling and a turnover soon ended this threat allowing half backs Jacob Wragg and Will Cooper to spark off a back move which took play up to the home line. A clean lineout catch by Sam Featherstone set up driving maul with hooker Tom Howard touching down. The difficult conversion failed with the visitors taking a 5 – 0 lead on 6 minutes.

With a steady supply of ball from the set pieces, centre Luke Cowdell kicked through and, when the ball was re-cycled, fly half Will Cooper cut through to score under the posts. His conversion moved the score to 12 – 0 on 11 minutes. The home side responded with some strong driving play to make a rare visit into the visitors’ 22. Once more turnover ball produced some slick handling by ‘Ensians backs and a 70-yard move saw winger Ali Booth outpace the cover to score an excellent try near the posts. Will Cooper’s conversion stretched the lead to 19 – 0 on 22 minutes.

Ali Booth was back on the scoreboard two minutes later with a try in the corner on 24 minutes after some powerful running by centres Ollie Eaves and Luke Cowdell. From the restart good interplay between forwards and backs saw flanker Joe Armitage open up the defence with a superb dummy as he ran in under the posts. Cooper’s conversion took the score to 31 – 0 on 28 minutes. Full back Alex Murphy was next on the scoreboard as he linked up with the backs to go over on 32 minutes. There was no conversion, but this lifted the score to 36 – 0.

With their front row of Toby Keep, Tom Howard and Josh Dyson having the edge in the scrums and Sam Featherstone and Ali Campbell producing quality lineout ball, the visitors were enjoying plenty of possession, but they suffered a setback as centre Ollie Eaves left the field with a hamstring problem. Alex Murphy moved to centre and Kristian Keinhorst took over at full back. They went straight back into the attack and slick handling put Ali Booth over for his hat-trick with Cooper converting to make the half-time score 43 – 0.

After the break Rob Lofthouse took over at scrum-half, Dan Stevens replaced Josh Dyson at prop and Rob Arbuckle came on at No.8 to add timber and experience to the pack. The Old Boys were stunned after only a minute of the second half as lock Matt Taylor brushed off defenders in a powerful run down the middle to cross the line half way out. What then followed was a collective effort by ‘Ensians forwards and backs which saw Alex Murphy score his second on 55 minutes with Rob Arbuckle touching down after one of his trademark rampaging runs two minutes later. One conversion by Cooper took the score to 60 – 0.

In a re-shuffle, Kristian Keinhorst moved to fly half with Cooper taking over at full back and flanker Paddy Phipps coming in on the wing. Flanker Joe Armitage then rounded off an impressive all-round performance with powerful runs to touch down on 74 and 76 minutes for his hat-trick. Cooper converted one to make the final score 72 – 0. Undeterred, the Old Boys then put in some strong drives in the last few minutes leading up to the final whistle, but the visitors’ defence held firm.

Within a few minutes of the start of this game it was clear that the hosts were struggling with the speed and organisation of the visitors. Credit must go to the Old Boys for a plucky performance with their decent lineout and occasional drives, but they rarely threatened as the scoreboard ticked over. For ‘Ensians their second big win in the Vase competition was well deserved, being built on strong running, sound handling and good support play.

An impressive total of nearly 200 points from their two pool matches has earned ‘Ensians a home draw in the “knock-out” round of the competition which starts on the 24th February when they play the winners of the North West region to determine which team progresses to the National semi-final. Their opponents will be the Ramsey Club who will travel from the Isle of Man.