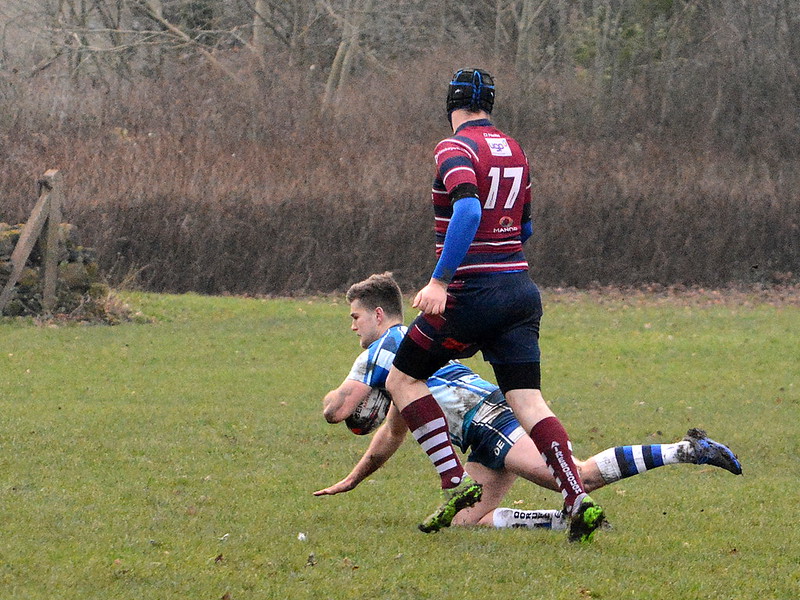 On a bitterly cold afternoon with a light Easterly breeze and a heavy pitch 'Ensians travelled to play Aireborough where they have often struggled over recent years.

Playing against the breeze play was even and mainly between the 22's for the first 15 minutes .The visitors were on top in the scrums but their attacks were thwarted by sound home defence. The stalemate was broken after 17 minutes .A neat chip ahead by Will Cooper was kicked on and after being superbly picked up by Alex Murphy, the ball was passed to Olly Eaves who scored a lovely try converted by Will Cooper.

Aireborough came straight back through strong forward play taking advantage of the sticky conditions but although they were moving in the right direction the visitors defence held firm. It was then 'Ensians turn and they were executing fine phases of play making good ground .The pressure told resulting in a penalty goal by Will Cooper on 28 minutes to make the score 10 points to nil.

Again the home team came back moving into the visitors' 22, grinding away and putting in the phases. As before the defence held helped by a fine relieving kick by Ali Booth . The visitors' forwards were working really hard with Joe Armitage and Michael Groves prominent and captain Sam Featherstone performing to his usual high standard in the lineouts. However approaching half time 'Ensians forwards put in a prolonged attack with the front row of Josh Dyson, Tom Howard and Toby Keep with stalwart support from Dan Stevens controlling the home pack and Rob Arbuckle and Paddy Phipps making the yards and dragging in the home defence.The ball was then opened out with slick passing by Alex Murphy and Nick Keinhorst through to Connor Bateman who ran 40 yards outflanking the defence to score a superb unconverted try making a half time score of 15 points to nil in favour of the visitors.

Playing into the "nine hole" the second half was mainly played out in the home half of the field with both defences in control and play generally taking place between the two packs of forwards. Unfortunately Connor Bateman had to leave the pitch through injury which blunted the visitors attack somewhat but Matt Taylor came on and with immediate effect tested the home defence at every opportunity. When 'Ensians exerted extra pressure penalties were conceded by Aireborough one converted by Will Cooper on 17 minutes.

'Ensians were taking control of the game in the home 22 with the forwards striving for possession and the backs trying to break through but still the excellent defence by Aireborough did not crack despite a further Cooper penalty goal on 30 minutes making the score 21 points to nil.

Then after 35 minutes Aireborough broke out with their forwards and backs linking up to create an overlap and score a well taken unconverted try wide out completing the scoring at 21 points to 5 in favour of 'Ensians. Much of the last 5 minutes were spent on the Aireborough line with numerous 5 metre scrums held firm by the home team .Nick Hesketh, Matt Taylor and Rob Arbuckle all came within inches of scoring but to no avail. 'Ensians deserved their win but much credit must be given to Aireborough for their grit and determination and their excellent defence.

'Ensians 2nd VX beat Aireborough 2nd XV 22 points to 21 in a great game at Otley and created club history with tries scored by both father Dan and son Joe Ridgeway being the first time this has been achieved by 'Ensians.

Otliensians 2nds knew that they would have to be at their best to beat aireborough who had only lost twice all season, & given ensians a 48 – 10 thrashing at the start, but coach Harrison & team manager tempo had other ideas. The nerves must have been getting to prop boothy [ mentally weak] as he had to have a drink before the game to settle them. Captain conner was walking to weeton, so couldn’t make it, so captain for the day was pocket battle ship – john offer. Ensians have let themselves down this season in the first 10 minutes, when they have leaked points, so a good Harrison warm up before kick off got the boys ready, even if it emptied half the tank of some!, but handling errors were well down boys !!. the front row was wheely, captain for the day – john offer & ray drake, with nervous scots man boothy on the bench. The tenniswood twins were in the 2nd row, with tempo wanting bret testing for drugs after, with him playing his best game for 10 years, but the results showed it was girlfriend cathys vegetable broth !. Ben smith, joe ridgeway & father dan made a solid backrow & Alex longstaff put on the 9 shirt with king Kristian [ please don’t go! ] at 10. Human juggernaught, james smith put on the 12 shirt again with an ill, dom oddy at 13. Joe tindal played one wing with new man fenton starting on the other with an impressive game. Daz cooley put on the 15 shirt, with his extention now nearly done [ blockwork up ] & his wife & children all cried with pride as he drove off to play while the biting wind blew through the house !. ollie Gibson & ben jones filled the bench with viscounts legends Jamie chapel & jock. From the kick off, aireborough attacked using their big forwards & backs & after relentless pressure & a couple of tap penalties, they were 7 – 0 up with 7 minutes on the clock. Ensians came straight back, with james trying to smash his way through the centres , with some big drives from the forwards with offer to the fore. After working their way up the field, a poor kick to touch let aire off, but rather than let it get to them & moan, ensians worked their backsides off to get back in the game & were rewarded when angry dan charged through to score, after good breaks by ben smith & fenton to make it 5 – 7. With king kristian [ please don’t go ! ] running the backs, ensians were causing aire problems & a great break by daz cooley looked like a certain try, but after aire turned the ball over & a great kick by their standoff, ensians were back under pressure & aire scored again to make it 5 – 14 from a charge down with the last kick of the half. Harrison & tempo knew it could have been a different story & a win was in sight if they kept the effort up. Joe ridgeway went to outside centre with oddy ill, for ben jones to take up his usual position in the back row, & boothy gave ray a rest after a hard 40 minutes. The aire defence were starting to feel the effects of james hitting them at full tilt, & from a break, joe & fenton took it on to the 22, & it just left king Kristian [please don’t go!] to dummy his way over for the best try of the season !!!, & ensians back in the game at 12 – 14. The forwards were working hard, with ben smith been a pain all day to aire, but every man stood up against a very strong aireborough team with bret standing out for his efforts. A good kick chase saw joe & fenton charge up field & joes tackle caused a turnover for fenton to kick on & score his first try for ensians, & it was 17 – 14 with 50 minutes on the clock. From the restart, ben smith turned the ball over & ensians were on the attack again. A great miss pass from the king put mattty t over but it was ruled forward. From the next line out, matty stole the ball, james smith broke the line & joe ridgeway evaded several tackles to finish the move to make it 22 – 14, & aireborough were starting to realise they were in a game with 10 minutes left. Using the big forwards & strong running centres, aire battered their way up the field, with their standoff running the show, & with 3 minutes left, forced their way over to make it 22 – 21. From the kick off ensians fought to get the ball back, & with old heads wheely ,boothy, dan & ben picking & going to run the clock down, the final whistle went for the scalp of the season for ensians 2nds. A deserved win against a strong aireborough team to show that ensians can beat the best, if Kristian stays. [ A just giving page has been set up to help Kristian make the right decision. please give generously! ]