OORUFC 29 vs 3 Leeds Modernians
A bonus point win at home against local rivals. 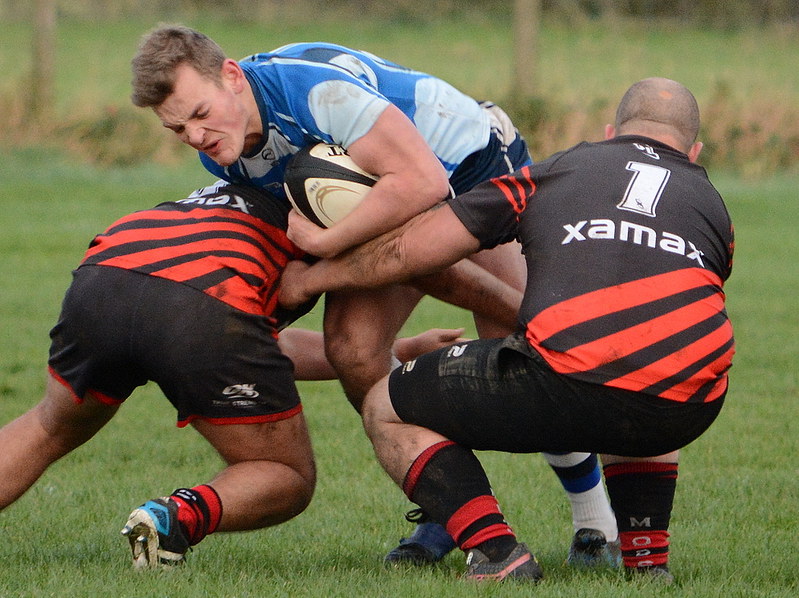 On a day with a bitterly cold wind, League leaders ‘Ensians took on old rivals Modernians in what promised to be a close encounter. Using the strong the wind in the first half, the visitors took the game to the hosts, enjoying a considerable territorial advantage, with their forwards showing that they had a driving maul which could pose problems for the home side. ‘Ensians for their part produced a solid defence and when they managed to break upfield, they were rewarded with a fine try. Despite exerting pressure for much of the half, all Mods had to show for their efforts was a penalty. In the second period with the wind in their favour, the hosts clicked into gear and ran in four more tries.

From the start the visitors moved into opposition territory and, with forwards and backs linking well, they were soon in the home 22. Sound defence by the hosts kept them at bay, but in the scrums, the home front row of Paddy Phipps. John Offer and Josh Dyson and the rest of the pack caused big problems for the visitors. Despite being the lighter pack, they drove the visitors back and what ball Modernians managed to scramble away was hurried and untidy. On two occasions the visitors produced well-organised driving mauls which gave them a good platform for attack, but the home defence held.

With play being even, Mods missed a penalty and then the home half backs of Rob Lofthouse and Ollie Eaves set their back line away up the left. Centres Dom Oddy and Luke Cowdell made good ground before putting winger Nick Keinhorst into space. Seeing support on the outside from lock Matt Taylor, a good offload saw Taylor blast through two tackles to score a fine try half-way out. The failed conversion gave the home side a 5 – 0 lead on16 minutes. Although they dominated territory for the rest of the half, the visitors couldn’t break the home defence, only managing a penalty to make the score 5 – 3 to the hosts at the break.

With the wind in their favour in the second half, the home side quickly moved into the visitors’ territory with fly half Eaves and full back Will Cooper gaining ground with long diagonal kicks. The visitors managed to get the ball into touch near their line, but from the subsequent lineout, flanker Joe Armitage forced his way over in the corner to lift the score to 10 – 3 on 44 minutes, the difficult conversion having failed. Newcomer Nick Hesketh came on for Dom Oddy in the centre and prop Toby Keep took over from Josh Dyson.

With ‘Ensians’ lineout also working well through Sam Featherstone and locks Taylor and Jack Smith, the home side used the possession to continue to pile on the pressure. Mods defended desperately, but the pressure told and a powerful drive took flanker Joe Armitage over the line for his second try on 56 minutes. The conversion failed, taking the score to 15 – 3.

Using possession from their dominant scrum, the pressure on the visitors continued and No. 8 Rob Arbuckle picked up and drove over on 64 minutes for the bonus-point try with Will Cooper adding the conversion to lift the advantage to 22 – 3. At this stage the referee stopped the game to speak to the noisy band of Mods’ supporters, presumably about the nature of their behaviour and language.

The home side went straight back into the attack and on 70 minutes Rob Arbuckle brushed aside defenders to go over for his second try, with the conversion by Cooper stretching the lead to 29 – 3. This seemed to spur the visitors into action and through good interplay by both forwards and backs they took play up to the home 22 where they proceeded to batter the line for several minutes. The home defence responded defiantly and, after some close calls, the ball was eventually cleared as the final whistle went with the score at 29 – 3 in the hosts’ favour.

This was a hard-fought contest with Modernians unable to capitalise on their territorial advantage in the first half through resolute defence from the home side. After the break ‘Ensians made good use of the wind to pin the visitors down in their own 22 with forwards and backs working well together to produce four more tries to add to the one in the fist half. This was an all-round sound performance from the hosts to keep them at the top of the table.

With young coach Harrison back & numbers good at the start of the week, a couple of late withdrawals only put a small dent in the squad. Joe tindal had stiches in his neck after shaving for the first time & an upset big eddy was talked round by compassionate team manager tempo after his online relationship broke down with fran, when after a romantic evening out, he realised fran was short for frank! andy wood & ben Tetley put their boots on for the first time this season in the front row with mikey groves, & plastic jock boothy on the bench. Bret & mick Wilson were in the engine room with ben jones, alex beckets & salavation army stud muffin dan ridgeway at 8. No1 son joe ridgeway was at 9 with matty tenniswood filling in at ten. Alex [the shoulders ] bayfield played inside centre while captain conner moved to outside. ryan lowe moved to fullback to leave ollie Gibson & dave [ the hands ] smith to fill the wings. Ben smith & love them & leave them eddy were on the bench with driving specialist boothy.

Ensians started on the attack, but silly penalties gave Knaresborough possession & with some big boys in the pack & good backline, it was time for ensians to defend. With ensians backline disjointed through changes, simple hands with good running lines gave the visitors an overlap for their winger to go in at the corner & with the conversion it was 7 – 0 with 10 minutes on the clock.

Alex beckets was struggling with his shoulder after frustrating the opposition with his turnover rates, so ben smith came on to bring his brand of rugby to the game, picking & going from broken play to get in behind the visitors. The scrums were under pressure with the Knaresborough hooker twice the size of ben tetley & line outs were testing the line out specialist bret to the limits against a very competent Knaresborough team. The forwards were working hard & joe was using andy wood, ben, mick & grovesey to try break the Knaresborough defense, but they were up to the task. A good backs move by the visitors created the overlap again & it was 12 – 0 to Knaresborough with 20 minutes on the clock. Matty was starting to get the ensian backline working with conner & alex making headways with joe always supporting with the bens & dan, to put Knaresborough under pressure.

From a clearance kick, dave smith took a quick line out to ryan who made a great break to the 22 & with a broken knaresborough defense, the trumpet man dan went over to make it 12 – 7 on 25 minutes, with matty converting. It was knaresboroughs time to get on the wrong side of the ref & matty punished them to make it 12 – 10. mikey groves showed himself with a great break from 22 to 22 & after some illegal activity, matty put ensians in front with a penalty to make 13 – 12 on half time.

Ben Tetley had to come off after his heavy opponent took its toile, so mick groves went to hooker & boothy went to prop. Ensians started the second half well with the big eddy, grovesy & dan making the hard yards with joe & ben smith sneaking through any gaps left, & after a dump tackle on ben jones gave the visiting prop a yellow, a quick tap caught Knaresborough knapping, & matty went over to make it 18 – 12 to ensians. With Knaresborough having some good young lads, bret was under real pressure at the lineouts, with Knaresborough pinching a few, & after boothy had a clash of heads to leave a lump the size of his brain stuck out, the scrums went uncontested.

Knaresborough were starting to put some good moves in the backs together, but with 3 men overlaps, they butchered 2 or 3 tries, before scoring from the forwards on 70 minutes to make it 18 – 17 to ensians, & with tempo willing the clock to run down as the visitors had all the momentum. Unfortunatley knaresborough managed to score a late try to steal a win at 22 – 18.

A good game played in good spirit. With ensians forwards now more settled, they can create problems for most teams, but with no real 10 & a shuffled backline most weeks, the more experienced backlines will always create chances against this willing bunch.