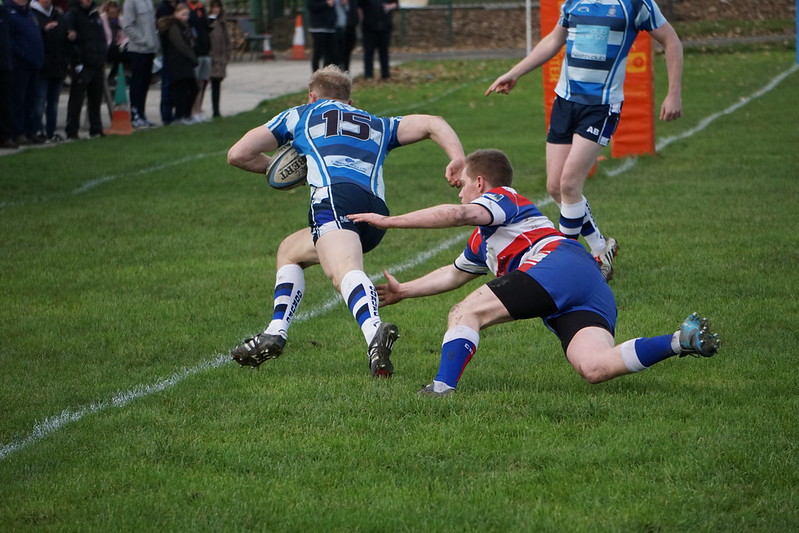 The scoreline doesn’t tell all, but we cannot carp at a bonus-point-win away at Castleford, one below us in the Table.

This is a very good ‘Ensian side, albeit still not quite the “FIRST” team and to outplay the third in the League so emphatically says much about the strength & quality of the squad. Indeed, the game should have been “put to bed” by half-time, but at least three clear-cut try-scoring opportunities were spurned at the last phase. A 5 - nil lead at that point gave the nagging doubt that Cas might just “nick” it in the second half. That doubt was quickly dispelled as the visitors took control, though it has to be said that for long periods both defences held firm and the gain-line was rarely threatened. Eventually, the hosts tired and territory belonged to the ‘Ensians. Castleford were pushed all over the place at scrum time and if the visitors’ line-out didn’t always function smoothly, turnover or a penalty invariably returned the ball to them. Injuries to Connor Bateman (very early on) and John Offer were unfortunate, but replacements Alistair Booth and Dan Stevens soon contributed and minimised any disruption.

Second half substitutions for Dom Oddy & Rob Lofthousewith, both of whom had good games, with Will Prest (in the centre) and Jacob Wragg (at scum half) emptied the bench most effectively and showed again the flexibility which the coaches have at their disposal. To mention everyone would be simply to read the squad sheet, but Alex Murphy really makes a difference, Ollie Eaves’ out-of-hand left foot to right touchline is aesthetically pleasing and brilliantly effective, Paddy Phipps was everywhere having moved to hooker and Joe Armitage’s all-round game was rewarded with (I think!) the last try. Castleford missed two early penalty chances, which perhaps set the tone for their day. ‘Ensians also failed wth a penalty attempt, with Bateman pulling a hamstring in the process. Tackling was good by both sides, with occasional breaks making ground.

‘Ensians' first try came from some slick inter-passing and Murphy sprinted over with room to spare after an inside pass from Booth changed the direction of play. The improvement failed and after 25 minutes the visitors led by 5 points to nil. Cas. came back strongly, but spoiled it with a knock-on. Sam Featherstone’s tackling stood out to keep the hosts at bay and ‘Ensians began to assert authority, pushing their opponents in the scrum. ‘Ensians managed to “avoid” scoring on three occasions before half time and then withstood pressure from Castleford to keep their line intact. What breeze there was died and the second half had no conditions advantage to the visitors.

The restart see-sawed until Will Cooper’s break was foiled by a good tackle and a turnover. A super run by Rob Lofthouse was halted, but some exquisite passing led to a try for Eaves. Straight running, passes timed, good football, rugby is quite easy! 10-nil just into the second passage. Place-kicking by both sides had not been of the highest order, but now, Murphy enjoyed a successful penalty conversion to put the visitors ahead by 13 to nil. A Cas penalty in the ‘Ensians 22 then led to a kick to the corner, a line-out maul and a converted try. Castleford trailing by only 7-13 was against the run of play and the next phase would be crucial. It appeared that ‘Ensians were losing control, but then a tremendous run by Murphy after a break by Joe Armitage produced a try and restored some balance to the scorelline. The conversion failed, but ‘Ensians led by a more comfortable 18 to 7 twenty minutes into the half. Castleford found some vigour, but the visitors were able to withstand an onslaught and regain the initiative. ‘Ensians continued to tackle well and whilst play was a little disjointed, there was no doubt as to their dominance, albeit with a less than trouble-free line out. ‘Ensians had two scrums in front of Cas’s posts, Eaves grubbered through and eventually from a scrum, the visitors kept it in the forwards, recovered from an interception, won another scrum, pushed Cas all over the place and forced yet another set piece. A strike against the head gave ‘Ensians possession and in the dying, very cold, moments, a penalty scrum put the visitors into the driving seat and Armitage went over for the bonus point try.

They’re good to watch, this lot and there is much to admire. Lovely running lines, resolute defence and an obvious team spirit. Old Mods next week will be hard, on both sides of the touchline, but I don’t think “we” need fear anybody! Support is there in numbers, Saturday afternoons are eagerly anticipated.

With 6 of the players from the week before not available & 2 who were picked for this week’s game unable to make it, + Daz Cooley working on his extension, & big eddy in a full body cast after playing for just 4 hard minutes, team manager tempo was thinking, how nice it must have been for young apprentice manager josh Howarth the week before, to start a new career with a plethora of players. With no time to dwell, [ with a bottle of wine & Jägermeister bombs. ] young coach Harrison & tempo came up with a cunning plan to get the becket brothers back in the blue jerseys, & Ensians arrived at Yarnbury with 19. Unfortunately, Yarnbury had 12 in the end, with the 4th team not only raiding them of players, but also getting the best pitch as they were in some kind of merit game, while Ensians was a friendly & put on a bog. With poor old Yarnbury 3rds having been stuffed by Otley Saracens the week before [why were they playing them!], tempo really felt for them, so the game plan was, lets stuff them !! . the front row was mirror, signal, manoeuvre, [driving instructor ] Smoothy Boothy , Wheelybin, [more like a mini skip ] & Mikey [ my car doesn’t do tram lines ! ] groves. Unfortunately, the scrums were uncontested, so Boothy played the first half for the opposition with Olly Gibson & ben smith [heroes] while jay beckets filled his position in the front row. Bret the human salmon was in the second row with ben jones, with a backrow of Dan ridgeway, john beckets & the human juggernaut which is James smith at 8. Tom beckets played 9 for his second game at Ensians while Joe Tindal made a career change to play 10, & played very well. The hyperactive Jack Beckets was at inside centre while the promising Nick Hesketh played only his second game at union at outside & impressed once again. Captain Conner took up his fullback role once again, while Alex [the shoulders] Bayfield & Dave [hands like cows tits ] smith shored up the wings. Joe ridgeway put on the subs shirt, just in case he was needed after already playing during the week. Ensians took the game straight to Yarnbury, with James smith doing one of his bulldozing runs. Mikey groves was like another 7, but with a props shirt on to support, & 4 minutes into the game & ben jones went over for a well-deserved try, & with tom becket converting, it was 7 – 0. It was now the backs turn to show intent, & good hands from joe & jack gave nick half a gap & he was through & gone & a couple of desperate tackles later, it was 12 – 0 on 8 minutes. John beckets was next to score with good support from his 6 shirt, 4 minutes on, then nick got his second with only 21 minutes on the clock & Ensians were now 26 points up, which got the 3 second team supporters screaming with delight, with jerry Simpson nearly falling off his shooting stick. With Yarnbury trying to kick to relieve pressure, Alex the oki koki shoulders,[ in out shake them all about ] set off on a mazy run through the yarnbury defence to score & the half was finished with jack beckets going over in the corner to make it 38 – 0 with 6 tries & 4 conversions. To try even the game up, captain Conner, Wheely & john beckets played for Yarnbury, to give ollie Gibson, ben smith & Boothy time in their own team, but driving instructor Boothy’s track rod ends had gone so he joined the large spectator group on the side lines & Ensians started the second half with 14 to try give Yarnbury a chance. Mikey groves was the first to score after great support play to make it 45 – 0 within 6 minutes of the second half, but injuries to ollie Gibson & nick Hesketh [ both shoulders] meant that tempo had to take john beckets back off the opposition, to even it up. Yarnbury then stepped up to show Ensians what they could do if they’d had the players, by playing at a high intensity, & was rewarded with 2 tries to bring it back to 10 – 45, but with Dave [cows tits] dropping most passes & ben smith butchering a try, it took john & jack beckets to show how its done with simple hands & support to finish the game early at 10 – 55. This wasn’t the game Tempo or Harrison wanted, but having been on the other end of these games on quite a regular basis, a win is a win. Onwards & upwards.