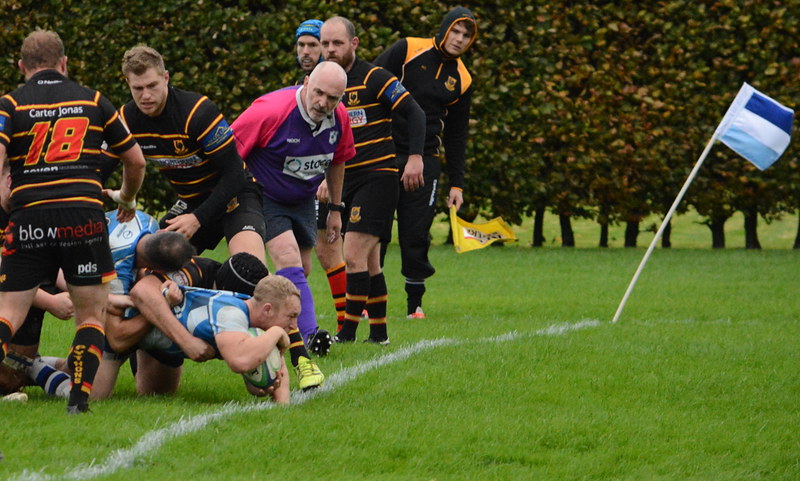 A howling gale greeted the sides on a dry but windswept afternoon at Chaffers Field as Otliensians entertained local rivals Harrogate Pythons in this Yorkshire Three derby. The elements were not conducive to fast flowing rugby and the crowd was anticipating a tight game.

Otliensians played in to the teeth of the gale in the first half. With less than 2 minutes on the clock the home side won a scrum against the head, No. 8 Rob Arbuckle fed the ball to scrum-half Rob Lofthouse who found his half-back partner Will Cooper who scampered in near to the posts. The conversion gave the home side an early boost and a 7-0 lead.

The confident start was maintained and with only 10 minutes on the clock Otliensians won a third scrum against the head. Following several phases of controlled possession full-back Alex Murphy broke through the Harrogate defence for a second try. Facing a 12 point deficit Pythons tried vainly to get a foothold in the game but midway through the half their stand-off chipped the ball straight in to the hands of the oncoming Olly Eaves. He gratefully accepted the chance for an easy run-in to score under the posts and a 19-0 lead.

On the half-hour mark came the try of the match. The home side was awarded a scrum inside their own 22. The ball was moved quickly to wingman Connor Bateman who raced 70m to outpace the cover defence and score wide out. The score also brought the home side a deserved try bonus point.

From the resulting kick-off, the visitors pressurised the Otliensians line and were rewarded with an interception try under the posts. The extras reduced the deficit to 24-7 to give Harrogate a glimmer of hope. Otliensians continued to dominate the half and further converted tries from Luke Cowdell and Connor Bateman gave Ensians a commanding 38-7 half-time lead.

The second half started in the very same manner as the first, from a scrum position Otliensians ran the ball through the phases and created an opportunity for Bateman to score his hat-trick. To their credit, Harrogate did not give up and following a sustained period of pressure they scored a second converted try to reduce the score-line to 43-14.

However, the remainder of the match belonged to the hosts and three additional tries from the captain Sam Featherstone, fly-half Will Cooper and a fourth try for winger Bateman reflected the home sides dominance. Bateman converted all three of these tries to reach a personal tally of 34 points and to leave the final score-line 64-14.

Despite the conditions, Otliensians produced a controlled performance scoring ten tries against a very capable Harrogate team. The bonus point victory maintained second place in the table, and closed the gap on the leaders, Northallerton, to 3 points.

With people with disposable incomes still on holiday, injuries, work & only one of the beckets brothers available, getting in the way of tempos dream team starting at Skipton, tempo had to call on daz cooley again who was working on his extension. Unfortunately his wife answered & said he was tied up for the day?? Travelling to Skipton with 11 wasn’t the start tempo wanted, with even coach Harrison working – counting things apparently ! Luckily, lukeaszes cousin was over to watch, Petrov temposkivic, who obviously had played at a good level as he oozed class with every touch of the ball, to take the numbers to 12. With the Skipton manager lending Ensians 3 players to make up the numbers, [fair play to him] a game could be had.

With very little warm up or structures in place for Ensians, it was always going to be hard. With dan macabe back from injury starting for the 2nds with ray drake & wheelybin in the front row, there was youth & experience. Bret started in the 2nd row with lee from Skipton who worked hard all game for the Ensian cause. The backrow was 2 other Skipton lads who also gave it their all with ben jones at 8 who doesn’t do anything flash, but just works hard for the team, & probably was the man of the match for tempo for never giving up on one of them days. Alex becket moved from 7 – 9 to help out, [ only 2 numbers but a hell of a difference ] & played very well for his scrumhalf debut. Captain conner moved to 10, with joe tindal playing 12. Dave smith junior moved from wing to outside centre, with mick birts putting the fullback shirt on, & the 2 polish flashes on the wings.

The game started with Skipton attacking & Ensian defending for their lives, with dave smith putting in some big hits to stop the lively Skipton backs, while the Ensians team was trying to work out a game plan on how to stop the onslaught. The 3 Skipton lads were putting in a good shift to halt their mates alongside ben jones, dan macabe, wheely & ray. With a gale blowing down the pitch, boot to ball was the way forward, but with the Ensians backline struggling to kick the skin off a rice pudding, the running game was quickly adopted. The forwards were making a good account of themselves in the scrums & line outs with bret leaping high as usual & dan, ben & wheely driving hard down the sides of rucks, but because players were out of position, Skipton found gaps & scored after 15 minutes to make it 7 – 0.

They scored 2 more tries through hard running from forwards or backs, before Ensians put some decent phases of rugby together to work their way down the pitch towards the Skipton line. After good forward pressure from a line out & Skipton giving away penalties, lee [ Skipton lad] dived over for a deserved score on half time to make it 21 – 5. Playing into the gale was always going to be hard, especially with Skipton putting fresh legs on at various intervals, & they used the wind to good effect, kicking Ensians back into their 22 & scoring a couple of tries to make it 35 – 5. alex was trying to use the forwards to work their way out with a close driving game, only to be kicked back into the 22 with any turnovers. Conner was using lukeasz & Petrov to make the hard yards, but with Skipton realising what a threat Petrov was, he had 3 men on him to make sure he didn’t change the game. Conner used his unusual running style to find room, with joe & dave taking it on & after pressure from mick & Petrov on the Skipton wingman, Ensians had some field position in the oppositions half. A good line out & drive took the pack 10m further up the field & penalties were conceded by Skipton. A quick tap was taken but unfortunately the ball was turned over, & hoofed back into the Ensians 22 & with it Ensians last site of the Skipton try line.

Two more tries by Skipton after sustained pressure ended the game at 45 – 5, a hard day at the coalface was over. Fair play to the players for never giving up & the Skipton lads who worked hard to help Ensians out. The Skipton management & lads were full of praise for turning up & playing rather than just dropping out. If Ensians had their A team out playing it could have been very different against a good Skipton side.