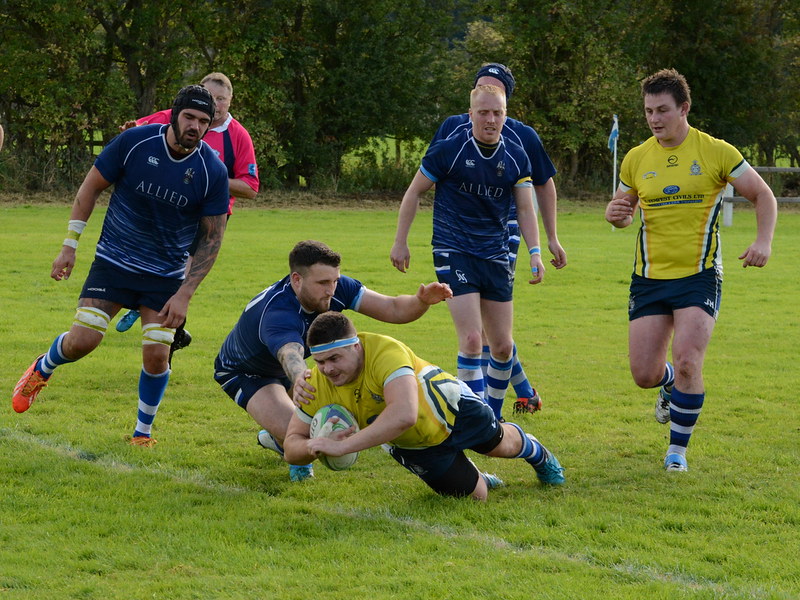 
Steady rain was falling at the kick off for this first home League encounter of the season, but as the afternoon progressed the weather improved with blue skies and sunshine at the conclusion. This was in direct contrast to ‘Ensians’ performance where, after fending off some early pressure from the visitors, the home side ran in four excellent tries before the break only to manage one in the second half, despite a huge territorial advantage throughout.

In the first few minutes Knottingley used their powerful runners to make inroads into home territory, but once the home side got clean ball, half backs Rob Lofthouse and Will Cooper set their back line moving with a sweeping move into the visitors’ 22, winger Connor Bateman looked dangerous as he cut inside, but good cover-defence halted the move. It was then all out attack from the hosts as they moved play from left to right with No. 8 Rob Arbuckle coming close. Eventually good support play put flanker Luke Cowdell over in the corner, the failed conversion putting the home side 5 – 0 in front on 10 minutes.

In the scrums the home front row of Dan McCabe, Paddy Phipps and Tom Howard had the edge on their sizeable opponents and the supply of clean ball was used to good effect with centres Tobias Gill and Ollie Eaves carving big holes in the opposition defence. Full back Alex Murphy joined the line and, after good interplay with winger Will Prest, he touched down wide out. The conversion failed, but ‘Ensians’ lead increased to 10 – 0 on 15 minutes. The hosts continued to attack with Rob Lofthouse going close before Knottingley started to gain possession through their solid lineout and good support play.

With good offloading, the visitors drove into the home 22 where they attacked the home line. Over- enthusiastic defence by the hosts gave away penalties and when Knottingley spread the ball, their centre cut through a gap to score near the posts. The successful conversion narrowed ‘Ensians’ lead to 10 – 7 on 20 minutes. Further pressure by the visitors led to a penalty and a good strike by the visiting kicker levelled the scores at 10 apiece on 27 minutes.

The home side immediately went back into the attack, but suffered a setback when centre Tobias Gill had to leave the field with a groin injury. Shortly after there was further bad news when young lock Dougie Elgar had to go off following a heavy collision. John Offer filled the gap in the pack with Nick Keinhorst taking the wing berth.

It was then business as usual in the Knottingley half as the hosts went back on the attack. The visitors’ defence was struggling to cope as both ‘Ensians forwards and backs linked together to produce some flowing rugby which produced a second try as Luke Cowdell jinked over on 34 minutes. The conversion by Connor Bateman stretched the lead to 17 – 10 and, after strong driving play by Paddy Phipps, flanker Joe Armitage and Rob Arbuckle, lock Matt Taylor crashed over half way out for the bonus-point try. The conversion failed leaving the score 22 – 10 at halftime.

After the break, the home side continued to spread the ball wide with full back Alex Murphy linking up to gain valuable territory with John Offer and Joe Armitage to the fore. Good interplay by forwards and backs saw lively hooker Paddy Phipps cut through for a well-deserved try. A fine conversion by Bateman stretched the lead to 29 – 10 on 45 minutes. Play was now almost entirely in the Knottingley half. With the home lineout generally functioning well, the home backs had ample opportunities, but the fluency of the first half seemed to desert them with handling errors and wrong options creeping in. As the backs launched another attack, a visiting player was yellow-carded for a tackle off the ball.

Home-side frustration crept in as chances were missed, with the only reward for constant pressure being a long-range penalty by Bateman to move the score to 32 -10 on 59 minutes. The home side allowed the determined “in your face” defence by the visitors to knock them off their stride and, what looked like a try in the corner for Alex Murphy, was stopped as he was barged into touch.

Despite producing a comfortable victory, ‘Ensians will be disappointed that they allowed the game to become scrappy for much of the second half when they completely dominated territory. They will be looking to put things right next week when they visit much-improved Wensleydale who lie one place below them at 3rd in the League table. 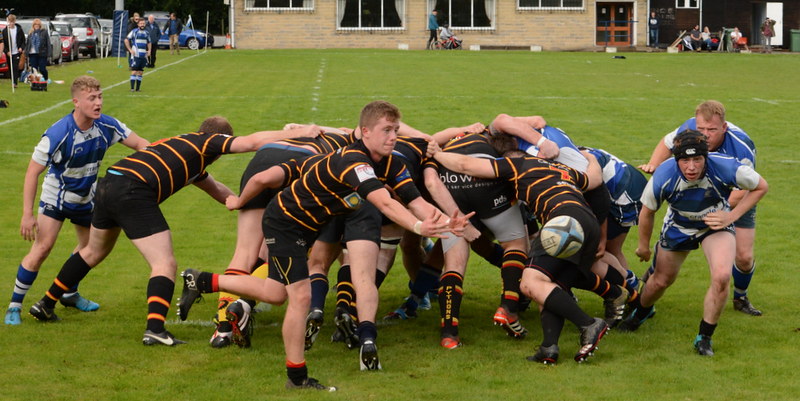