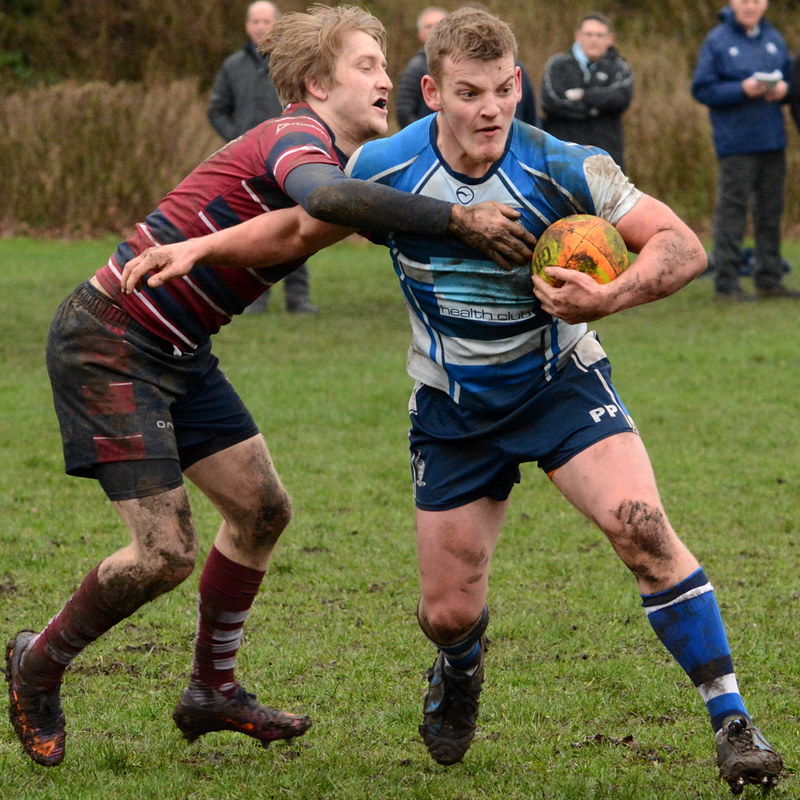 
On a cool day with a strong breeze diagonally across the pitch in remarkably good condition despite recent rain the visitors went straight into the attack and after only 3 minutes a neat kick by Will Cooper resulted in Olly Eaves scoring an unconverted try in the corner...The high tempo continued and after 10 minutes Alex Murphy collected an Aireborough kick ahead, made a break, and with a clever switch of direction passed to Luke Cowdell who scored a try converted by Will Cooper.

'Ensians continued to attack and from a lineout taken by Jack Smith from an Aireborough throw, the ball was moved across the backs for winger Josh Howarth to score wide out to make a score of 17 points to nil after 20 minutes. However the next 15 minutes belonged to the home team .The first time in the game that they entered the visitor's 22 a good move across their backs resulted in a converted try to make the score 7 points to 17 but good defence with Chris Westland prominent held them at bay until the home team scored again with a penalty goal on 33 minutes. 'Ensians then scored the try of the match .The forwards gained good quick ball from the scrum ,Will Cooper made the break and with an overlap Alex Murphy scored an unconverted try in the corner to make a half time score of :- Aireborough 10 points 'Ensians 22 points.

The visitors made a good start to the second half with a great tackle by scrum half Rob Lofthouse on his opposite number as the ball came out of the scrum...There followed intense pressure from Aireborough on the visitor's line for the next few minutes but again good defence followed by a penalty took play back to half way. After 15 minutes 'Ensians opened out the ball across their line, Josh Howarth had a good run and from a resulting 5 metre scrum the visitors scored a push over try by Rob Arbuckle converted by Will Cooper .Ten minutes later hard work by the visitors forwards took the ball to the home 5 metre line and Jack Smith crashed over for a try converted by Will Cooper making the score 10 points to 36 for the visitors. This was followed by an impressive team try, commencing with a great run by Olly Eaves and finished off with a neat back pass from Rob Lofthouse to Luke Cowdell who scored with Will Cooper adding the extras. Aireborough were not to be outdone and fought back bravely to score 2 tries one converted in the last 10 minutes with some enterprising open play.

This made the final score 43 points to 22 in favour of 'Ensians who now have to play the semi final tie at the end of April. This was a fine victory with great team spirit and the forwards scrummaging in the best form of the season.

Young coaching understudy, steve robinson asked for Saturday off so he could hopefully get to 2nd base with his first girlfriend, so it was just Tempo to sort out the troops.

The front row of myers, Tetley & wood were an experienced bunch , but were up against the, wily wheely , jock [ the legend lives on ] & a.n. other mod. 2nd rows were the tenniswood tantrum twins, with young guns – joe rideway & dougie ellgar covering every inch of the pith from backrow. Andy bower [ the only man to have had more injuries than big eddy ] was at 8. Lewis robinson was back at 9 with nick keinhorst pulling the strings from the 10 shirt once again. Ali Campbell made a welcome return to rugby in the centres after recovering from “smaller bicep syndrome,” [ a nasty condition where the biceps are actually smaller than you think they are! ] , while the ever present daz cooley put on the 13 shirt once more. Conner bateman turned up sober to start on the wing after being out injured, with speedster ryan lowe starting on the other, & Captain conner returned at 15.

To help Otley out, Tempo gave them, returning 1st teamer – jack Wilkinson, cam whinstanley & ben smith with bret swapping later to make a competitive game for all to enjoy. This still left Tempo with the Polish flash – lukeash, mick birts & new man alex bayfield on the bench, which was an unfamiliar position for the 2nd team to be in.

The game started with Otley using the forwards to drive it on close to the rucks, with their slippery no 8 running lines off his 10, but once ali Campbell re set his tackle radar, he didn’t go so far. Ensians first bit of decent ball was spun out to ryan lowe who drew in 2 men before actually passing !, to put matty t away & bret was up in support to finish off & it was 7 – 0 after 5 minutes.

From the kickoff, a good break by dougie was taken on by andy wood who passed to lewis who dropped it with try line in his site. A good shunt in the scrum was enough for Tetley to take ex sarecens hooker, jocks ball & bower was up & off with dougie in support to score his first try for ensians & it was 14 – 0 on 15 minutes. Line outs were going well with bret at the front & dougie in the middle, but with Otley having jack, Jamie & ben it was always a battle.

The Otley backs were causing ensians problems & a half break was popped up to ben smith who scored for the opposition to make it 14 – 7 & game on. With Tetley, Campbell & joe ridgeway tackling their hearts out, dougie, tony myers or bower were always there for the turnover, & lewis had the ball away for nick to use matty or ali as a battering ram. Daz cooley moved the ball well to conner paley who put bateman over to make it 19 – 7 with matty just missing the conversion. With ali Campbell spending his down time watching Johnny wilkinsons - how to kick yourself to success DVD, some strange decisions were being made involving his boot, so Tempo subbed him off to reevaluate his position within the team, which gave new start alex a chance to shine, a chance he took as he played well in his first outing.

For the 2nd half, the Polish flash came on for ryan, mick birts went to hooker for ben Tetley who’d injured his back & bret went to play for Otley so jack Wilkinson could swap. Mods stepped up their game & scored after a series of forward drives to make it 19 – 14. From the kickoff, strong runs from andy wood, jack & matty, pulled the Otley forwards in, then the backs moved the ball well , with conner paley tackled in the Otley 22 , a good clear out gave lewis quick ball & tony myers cut a good line to steam through & score to make it 24 – 14 on 52 minutes.

Otley came straight back & a good move put cam whinstanley away to score for the opposition & make it 24 – 21. With the scrums been uncontested most of the 2nd half, jack Wilkinson picked & went blind & a neat pass put bateman in for his 2nd on 65 minutes to make it 31 - 21, but it was left to tony myers to finish the game by scoring his 2nd try from a quick penalty by lewis after flattening Jamie chapel on his way.

A good game played in good spirit which was helped by the ref who let it flow, with big thanks to jack, cam, bret & ben smith for playing for the opposition even though it cost ben some sore ribs !