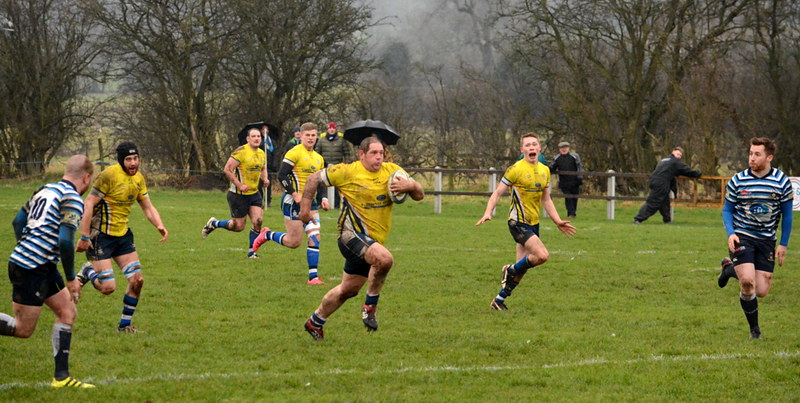 
On a cold grey afternoon ‘Ensians absorbed some early resistance from the visitors to go on to overwhelm them in the second half with a ten-try comprehensive victory. Their side was strengthened by the return from injury of centre Ollie Eaves and lock Jack Smith and both made their presence felt in this entertaining encounter.

In the first ten minutes the useful Halifax pack took the game to the home side with some good driving and offloading in the home 22. Their ball-control and domination of possession meant that the hosts didn’t get a look-in and on the first two occasions ‘Ensians managed to get hold of the ball, they knocked it on. After some close calls, the home side at last began to play some rugby and good carrying by the forwards coupled with a strong run by full back Luke Cowdell took play into the opposition 22. After attacking the line for several minutes, No. 8 Rob Arbuckle drove over wide out for the first try on 15 minutes to establish a 5 – 0 lead with the conversion failing.

The home side kept up the pressure with the front row of Toby Keep, John Offer and Paddy Phipps holding their own against a hefty Halifax front row. With a steady supply of ball in the lineout from flankers Sam Featherstone and Ollie Cooper, the home backs began to show their paces and full back Luke Cowdell joined the line to weave through the defence and cross near the posts. Fly half Will Cooper converted to stretch the lead to 12 – 0 on 22 minutes. As the home side backs continued to attack through centres Ollie Eaves and Lee O’Donnell, Luke Cowdell spotted space on the opposite wing and his well-placed crossfield kick saw young winger Lewis Robinson dive over to touch down for the third try. The conversion failed taking the lead to 17 – 0 on 27 minutes.

Halifax then stepped up a gear and took play into the home 22 where the hosts were once more under severe pressure from the visiting pack, conceding penalties along the way which were kicked to the corner to benefit from the visitors’ confident lineout. After a lot of scrambling in defence, a yellow card was produced for persistent offside by the home side. With a man missing, the visitors took advantage to batter their way over in the corner for an unconverted try, moving the score to 17 – 5 on 35 minutes.

After the break, the hosts clicked into gear again and both forwards and backs moved the ball well to put the visitors under immediate pressure, setting up Rob Arbuckle to go over for his second try on 45 minutes. A good conversion by Will Cooper stretched the lead to 24 – 5. Halifax briefly came back, but the pace of the game was beginning to tell and ‘Ensians ran in two further tries on 53 and 60 minutes, with a second try for Lewis Robinson and another from replacement prop Michael Groves. One conversion by Cooper took the score to 36 – 5.

Rob Arbuckle then rounded off a fine display with a trademark galloping run from 40 yards brushing off would-be defenders to score his hat-trick try on 65 minutes. The conversion failed, but the lively play and good handling by the home side continued with centre Lee O’Donnell slicing through for a try on 70 minutes which, with Cooper’s conversion, extended the lead to 48 – 5. New energy was added from the bench through No. 8 Ross Nichols and centre Josh Howarth. More points were to come with Cowdell jinking his way through for his second on 72 minutes with Cooper converting to push the score to 55 – 5. A fine display of interplay between forwards and backs was then rounded off by lock Jack Smith who dived over for the tenth try on 76 minutes to make the final score to 60 – 5.

This much-improved performance from ‘Ensians saw their backs gaining in confidence as the game progressed and the support from their lively pack made for an entertaining afternoon and a welcome bonus-point win. 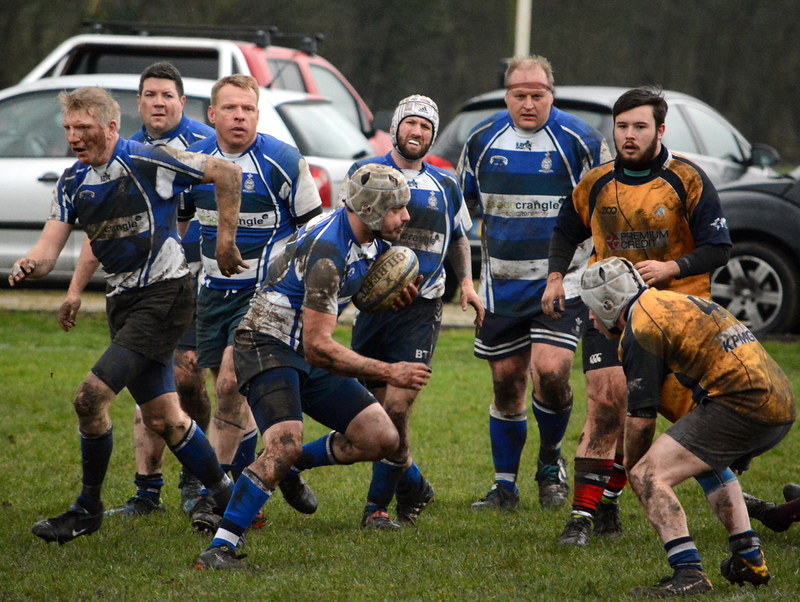