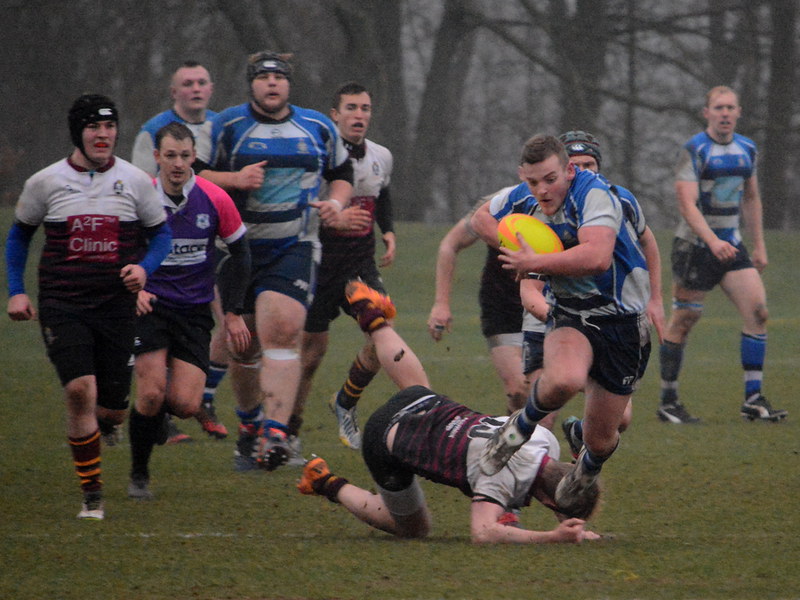 
On a damp, grey afternoon ‘Ensians played a re-arranged fixture which was postponed from last November when the students were involved in a Universities competition. The game followed a similar pattern to the previous week when the opposition dominated for long periods in the first half, the students totting up 17 points through three tries and a conversion, only for the visitors then to respond with a strong performance after the break to produce two good tries.

From the start, it was clear that the home side had some powerful runners in both forwards and backs as they quickly came out of the blocks, forcing the visitors to defend for lengthy periods early on. Although the ‘Ensians’ defence was stretched, they managed to thwart numerous attacks with flankers Sam Featherstone and James Smith and hooker Jim Dyson leading the way and prop Paddy Phipps also covering a lot of ground and tackling everything. In the scrums, the front row of Joel Wakeford, Dyson and Phipps managed to hold their own against a bigger pack. In the lineouts, Sam Featherstone provided a steady service allowing half backs Rob Lofthouse and Will Cooper to get their backs moving, but solid, first-up defence from the students halted progress.

The young, fit hosts had several players with real power and pace and, although several times a score looked certain, dogged rear-guard tackling from wingers Lewis Robinson and Connor Paley along with full back Alex Murphy kept the line clear. The visitors were gradually coming more into the game when centre Kristian Keinhorst pulled off a smart interception which put him in the clear only to be called back when the referee ruled he was offside.

Matt Tenniswood replaced Ross Nichols at lock and the visitors began pushing play into the opposition half through good drives from locks Lee O’Donnell, replacement prop Toby Keep and No 8 Rob Arbuckle. However, on 30 minutes the dangerous Medics’ centre saw a gap and powered through from his own half. Although cover defence came across, attempted high tackles failed, enabling him to run through for a fine individual try half way out. The failed conversion gave the home side a 5 – 0 lead. This encouraged the hosts who stepped up the pace with good handling producing two more tries on 32 and 36 minutes and, with one conversion, they stretched their lead to 17 – 0. To make things worse, the visitors suffered another set-back when a yellow card was produced for an alleged “no-hands” tackle as the break approached.

Starting the second half with fourteen men, ‘Ensians were once more under pressure and winger Lewis Robinson moved to scrum half when Rob Lofthouse suffered a recurrence of a leg injury. Gradually the visitors began to dominate, knocking down Medics’ runners before they had chance to get going. They battered the home line for several minutes before Lewis Robinson manged to sneak through and touch down on 51 minutes. The conversion narrowly missed narrowing the lead to 17 – 5. ‘Ensians continued to attack through good backing up and off-loading with centres Keinhorst and Luke Cowdell always threatening. With the home defence now in disarray Cowdell cut through to cross the line wide out. The conversion failed moving the score to 17 – 10 on 61 minutes.

Replacement hooker John Offer had to leave the field with an ankle injury and a yellow card for persistent offside reduced Medics to 14 men as ‘Ensians pushed for the next score. However, the hosts stepped up their efforts in defence and play was largely confined to mid-field as the final whistle sounded giving the students a 17 – 10 victory.

Although they could have been overawed by the fitness and pace of the students who were back to full strength after the Christmas break, ‘Ensians gradually buckled down and played some enterprising rugby as the game progressed. They can take credit for the spirited performance in the second half, but, in the end, they left themselves with just too much to do.