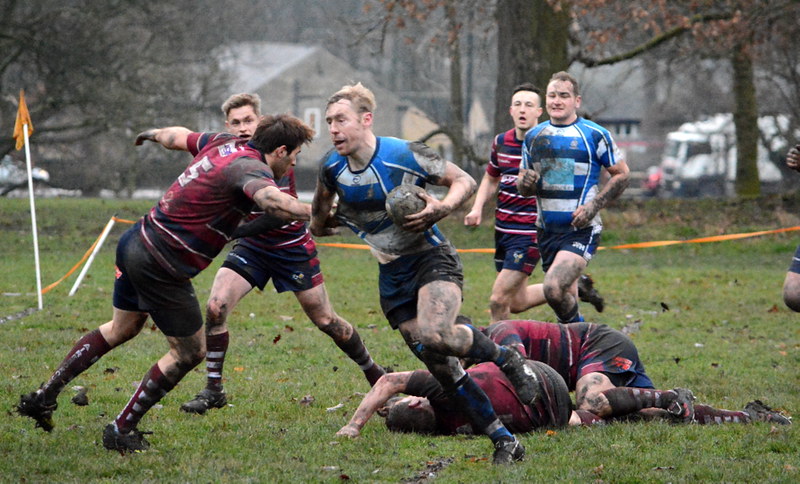 
On a cool calm day with a pitch whilst "claggy" in good condition for early January 'Ensians began their 2017 league programme against Aireborough who had soundly defeated them earlier in the season.

At the first scrum the home team pushed the visitors backwards gaining the ball against the head and giving a fore tend of what was to come. However despite this setback 'Ensians created a fine attack from a penalty ,where a neat kick ahead resulted in Luke Cowdell touching down but the try was disallowed .Alex Murphy was also prominent with a lovely touch kick. However all this pressure came to nought when the home team made valuable ground resulting in a penalty goal to open the scoring. after 15 minutes. 10 minutes later the strong Aireborough forwards took control in the visitor's 22 and despite frantic 'Ensian defence scored wide out followed by an excellent conversion to give them 10 points to nil lead.

Although struggling in the scrums the visitors took a lineout against the throw ,the ball was passed along the line but winger Josh Howarth was bundled into touch .Rob Arbuckle came on to strengthen the scrum with immediate effect and it was all 'Ensians for the last 10 minutes of the half coming close to scoring more than once. The home defence held firm only conceding a penalty scored by Kristian Keinhorst to give a half time score of 10 points to 3 in Aireborough's favour.

The second half started with 'Ensians in the ascendancy. A classy Kristian Keinhorst dummy saw him go over the line but he was held up. However he scored a penalty goal after 5 minutes (10-6) .After brief Aireborough pressure the visitors attacked again with Alex Murphy prominent in attack and Sam Featherstone and Oli Cooper doing good work in the lineouts.

After 19 minutes the first time the home team had taken play into the away 22 the Aireborough pack pressurised the line and the 'Ensians defence cracked resulting in a converted Try (17-6) .Worse was to come for the visitors when the home team broke from a scrum to score an unconverted try (22-6) .'Ensians fought back and following a drive by Paddy Phipps, man of the match Alex Murphy beat 3 men to score under the posts converted by Connor Bateman (22-13)

With 5 minutes to go the away supporters were looking for their team to show their usual grit and determination to score again to gain a bonus point but the Home team were the strongest and in a final attack gained 2 five metre scrums leaving the 'Ensian defence in tatters to score their bonus point converted try and a final victory score of 29 points to 13 points.

Whilst the score was rather flattering to the home team there is no doubt that they well deserved their win and laid down the gauntlet for the forthcoming Silver Trophy match at the same venue.


With a good Christmas break, some of the 2nd team shirts were stretched to breaking point with over 40 chins on show in a 19 man squad! Young apprentice coach Steve Robinson had been on a YRUFC sponsored course all week on spatial awareness, so team manager Tempo sent him out to put the corner flags in while he got on with sorting out the team.

Rodger Rodgers was a late inclusion, but had a quick withdrawal which left tempo with no inside centre, so 2nd row & steel bender Andy Wood stepped in. Aireborough had brought a big squad, with some big lads so it was not going to be an easy day. The front row consisted of man mountain (& accountant) Pete Bonner, Richard Simpson at hooker, & match subs dodger, Ray Drake (if only he was as slippery round the park). Bondgate Boxer Bret, & “Not as big” Eddy were in the engine room with old badger Paul Tosney & returning hooker John Offer in the backrow. Dan Ridgeway was back from modeling Shackleton’s High Chairs, so he put his rugged good looks on show in the number 8 shirt once again, to raise or even start some pulses in his older fan base. Live spark Lewis was at 9 with Alex Longstaff showing his skills at 10. Girder boy Andy, with Daz (I’ll cut inside with try line begging) Cooley filled the centres. Speedsters Ryan Lowe & James Burgess on the wings. Captain Conner was at fullback.

The game started with Ensians on the attack with alex using andy as a battering ram & moving the ball well, but Aireborough’s defence was up to it, & when aire got some ball there centre kicked through & won the foot race with Conner tied up to make it 0 – 5 on 10 minutes. Ensians came back using the powerfull scrum & Brett’s line out ball to push them up the field, with some big runs from forwards & backs, but Aireborough were putting the hits in with eddy put on his backside a couple of times. Daz cooley showed how to butcher a try, before It took one of the smallest men, Ryan Lowe to show how it’s done, dancing in from close for Conner to convert to make it 7 – 5 on 20 minutes. Aireborough scored again from a tap penalty on 35 minutes before Lewis Robinson danced his way over from a scrum to make it 14 – 12 on half time with conner converting. With Aireborough leaving space on the blind, the half time team talk was to try & exploit it, but whatever Jerry Simpson put in the half time oranges Tempo doesn’t know, but Aireborough scored easily from kickoff with a comedy of errors usually seen at Chipperfields Circus to make it 14 – 17.

Ensians worked hard with John Offer tackling his heart out, Brett leaping high in the lineouts & Andy Woods & Daz Cooley making the hard yards in the backs. Bonner, Ray & Richard worked hard in the scrum & loose with Dan Ridgeway & super sub- Friendly Ben breaking the gain line for live wire Lewis to get away from his markers to score again & Ensians were back in the lead at 21 – 17 with Conner’s golden boot on 50 minutes.

After this, one can only say it went pear shaped with missed tackles, players throwing passes like they were the Washington redskins quarterback & hands turned into cows tits, while Aireborough stepped up their own game to play some good rugby & steadily add to the score line at regular intervals.

Frustration crept in with Brett picking a fight with Aireborough’s biggest & angriest man, while not following Tempos fighting guide
1. Choose someone smaller than yourself.
2. Make sure you are on top of him before throwing punches.
3. Make sure the ref is close enough to save you.
Hence Brett came second.

The ref then got giddy with his yellow card (it must have been a Christmas present) as it came out at regular intervals with Ensians getting three. Eddy for pushing an Aireborough player before bursting into tears, Mick Birts for stopping a quick tap & Captain Conner for a head high tackle on someone who was diving over the line. Aireborough didn’t get away lightly either with four going their way. The final whistle was a relief.

After some good results before Christmas, Ensians need to lick their wounds, learn the lessons & regroup as it’s not going to get any easier boys !