A bitterly cold day, wind and driving icy rain all conspired to make playing (and watching) conditions pretty unbearable, but the visitors stuck to their task and with the help of their large and vociferous following support, plus the hosts’ propensity to upset the referee, took the winning points. Penalties abounded and Mods converted four to make their score overtake ‘Ensians’ two unconverted tries. 10-12 at the close meant that for the second week running, Old Ots had lost by the narrow, frustrating margin of two points.

Playing into the wind, Old Modernians found progress difficult, but through their big forwards, gave the hosts enough to think about; the latter, however, began to exert their own pressure and after 25 minutes, a sequence of tap penalties and scrum dominance culminated in Connor Bateman scoring under the posts. His conversion attempt went horribly wrong and in the wind sailed wide of the right upright. Mods then spent long periods in their opponents’ half and looked to have levelled the score with a well-worked try, but they were called back for a crossing offence. Penalty after penalty went the way of the visitors and if some of them were mystifying, they were given and if correct, ought clearly to have led to a yellow card. It was difficult to make coherence of it all at this stage. Some good tackling by both teams, with neither seeming able to find consistency in attack and with so many penalty stoppages, there was little flow. Perhaps ‘Ensians failed to make full use of the wind in the first half, and so finished just 5 points ahead at the break. Mods kicked 2 penalties early in the second half, but a long loping run by Bateman saw him score wide out to bring the score, with a failed conversion, to 10-6 in favour of the hosts. Still, though, ‘Ensians were not convincing and Leeds remained very much in the game, but the conditions really were the dominant force and threequarters looked distinctly unhappy in the cold and wet. A good run by Iewan Cranswick, relieving kicks by Will Cooper and a counter attack by Kristian Keinhorst put ‘Ensians in some heart, but a further successful penalty gave Mods a sniff at the lead and, with time moving on, a chance of snatching a win. 10-9 with 20 minutes to go.

At this point the voice recorder failed, the writing hand froze and the notepad in any event was too wet to write on!! Spectators, though not from Modernians, were seeking the refuge of the clubhouse, the second team game mercifully closed a little early, the sky was dark and threatening and the atmosphere on and off the field was anything but pleasant. ‘Ensians had been on the wrong side of the referee, Mods supporters were in crescendo as they insisted on more penalties and eventually two came their way. The first one missed badly, but the second succeeded and 10-12 in favour of the visitors gave rise to an unsavoury finish with anger, bad temper and a mass brawl bringing the game to a sorry finale. Rob Arbuckle left the field and ‘Ensians were down to 14 men for the last few minutes.

Penalties against tries, one side overjoyed with the win, one side disappointed with another narrow and, as they saw it, undeserved defeat. The taste of the after-match pint depended on which colours you were wearing; some days you win, some you lose! That’s life, that’s rugby. 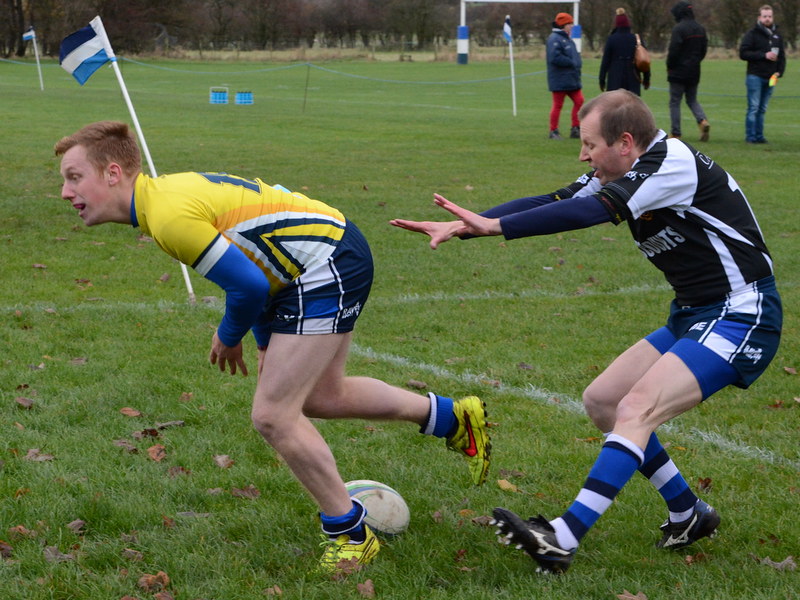