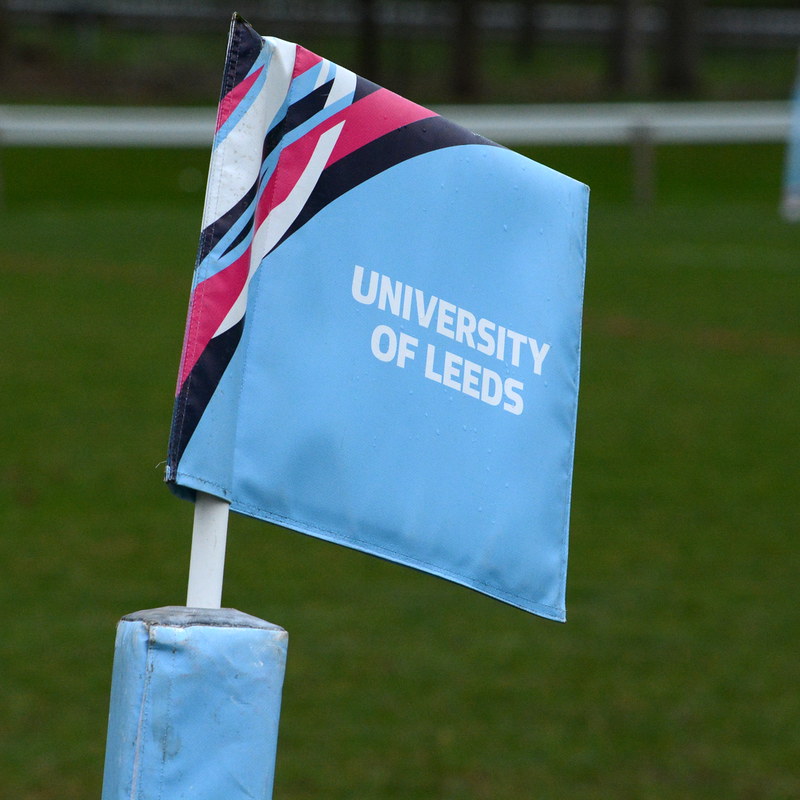 The setting of the large university pitch at Weetwood was ideal for this encounter where both young sides were intent on moving the ball wide at every opportunity. The result was an entertaining afternoon with ‘Ensians gradually getting on top in the second half to end up with a comfortable bonus-point victory.

The game started at a brisk pace with the visiting back row of John Offer, Matt Taylor and Keiran Walker dominating the breakdown to produce several turnovers in the first ten minutes to thwart attacking threats from the lively students. Half backs Rob Lofthouse and Kristian Keinhorst wasted no time in getting their backs moving, but the home defence was sound and there was no way through. The breakthrough came on ten minutes when fly half Kristian Keinhorst produced one of his trademark chips ahead for brother Nick on the wing to gather and go over halfway out. Connor Bateman’s conversion hit the upright to give the visitors a 5 – 0 lead on 10 minutes.

‘Ensians continued to attack in the opposition half with good lineout ball from Walker and Taylor against a pack with both height and weight advantage. The front row of Greg Jones, Jim Dyson and Michael Groves more than held their own pulling off several strikes against the head. There was some good driving from No.8 Taylor, prop Jones and lock Ali Campbell and centres Luke Freer and Chris Westland always threatened. A try in the corner after some good driving by the visiting pack was disallowed and the students continued to work hard in defence to keep the score at 5 – 0 until the break.

In the second half Luke Cowdell replaced Offer at No.6 and the ball was again moved wide at every opportunity with the forwards providing good support. After five minutes centre Freer set off on one his weaving runs to carve huge holes in the opposition defence to touch down under the posts for an excellent try, Bateman adding the conversion for a 12 – 0 lead.

The visitors didn’t have it all their own way as the Medics lineout was solid and they made periodic progress through driving mauls. However, once ‘Ensians moved the ball wide they looked dangerous and, with their lively back row in support, they put pressure on the Medics’ line. Prop Greg Jones managed to force his way through the pile of bodies only to lose the ball as he tried to touch down. Meanwhile the hosts were putting some decent back moves together and when it looked as though they might have the extra man on the left, winger Connor Bateman pulled off a timely interception to race in under the posts and stun the opposition. His conversion moved the score to 19 – 0 on 60 minutes.

The home side then raised their game and put pressure on ‘Ensians in their own 22 for some ten minutes. The visitors’ defence had to work hard as Medics pounded their line with locks Ali Campbell and Ollie Cooper to the fore, but turnovers and clearance kicks from lively full back Will Cooper and fly half Keinhorst gradually moved play up field. With the final whistle imminent, Matt Taylor lead a charge for the corner and the ball was slipped to Luke Freer to dive over for his second try. A good conversion from Bateman lifted the final score to 26 – 0.

It is never easy against the young, fit students and this was another good performance from ‘Ensians and an enjoyable afternoon for their spectators with local referee Carl Walsh using the advantage laws to good effect to keep the game flowing. ‘Ensians face a tough encounter next Saturday away at Thornensians who currently lie second in the League.