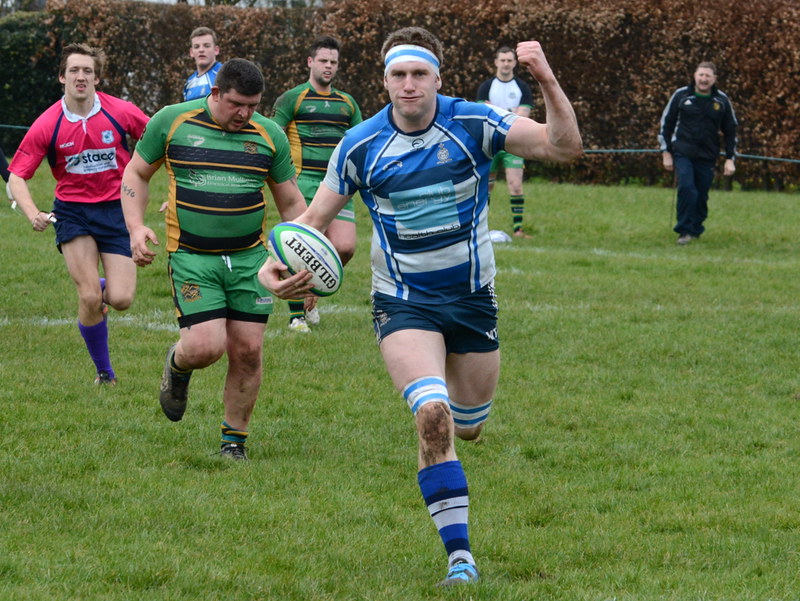 In a game re-arranged from December when Bramley couldn’t raise a team, ‘Ensians excelled in dry conditions to provide an entertaining afternoon of flowing rugby with forwards and backs combining well in a comprehensive victory.

Bramley set the scene in the first few minutes with some strong drives from their solid forwards, but as soon as the home side got possession half backs Rob Lofthouse and Kristian Keinhorst broke away down the right. A deft chip by Keinhorst was gathered by brother Nick who made good ground before offloading to centre Luke Freer who ran in under the posts. The conversion by Kristian Keinhorst gave the hosts a 7 – 0 on 5 minutes. From the re-start forwards Paddy Phipps and Rob Arbuckle drove well into the home 22 where quick ball allowed scrum half Lofthouse to scamper through a gap to touch down half way out. Keinhorst’s conversion stretched the lead to 14 – 0 on 9 minutes.

The visitors were struggling with the pace of the home backs and good lineout ball from flankers Matt Taylor and Keiran Walker allowed the ball to go wide at every opportunity. Good drives by prop Greg Jones, No.8 Rob Arbuckle and lock Lee O’Donnell made big inroads to the visitors’ half and once more a chip ahead by Kristian Keinhorst was snapped up by Freer who went in at the corner for his second. The conversion failed taking the score to 19 – 0 on 15 minutes.

Bramley at last began to put some phases together and with the help of a penalty, they made good progress into the home 22. There was an untidy lineout and as the ball bounced back over the line, a Bramley player dived on it to put his side on the scoresheet. The conversion failed moving the score 19 – 5. The home side then came back with a vengeance as both forwards and backs combined to put powerful flanker Matt Taylor away for another fine try. Keinhorst’s conversion stretched the lead to 26 – 5 on 23 minutes.

The home side continued to dominate with good ball from the scrum through Paddy Phipps, Jim Dyson and Greg Jones. From pressure in the visitors’ 22, young prop Phipps broke away to the left from a ruck and trundled fifteen yards with two Bramley players hanging on his back for a well-deserved try. The re-start provided the opportunity for some more fine running and offloading by the home backs with centre Ollie Eaves cutting through. The conversion by Keinhorst made the score 40 – 5 at the break.

Bramley started with more purpose in the second half and there were some good individual runs, but too often the support was not there and the tackling by the home side was solid and relentless. Re-cycled ball was whipped out to winger Nick Keinhorst to score in the corner and then, after some good interplay between forwards and backs, he then followed this up with his second five minutes later. One conversion by Kristian Keinhorst took the lead to 52 – 5 on 54 minutes.

To give credit to Bramley they came back strongly and took play into the home half. Their cause was not helped when they had a player red-carded for throwing a punch, but they then set up some powerful drives to go over in the corner on 69 minutes. With the score at 52 – 10, the home side quickly got back into its stride with some strong running and slick handling to send Ollie Eaves in for his second with Keinhorst’s conversion making the final score 59 – 10.

This was a fine display of open rugby from ‘Ensians with both forward and backs linking and handling well. Bramley kept going but they had no answer to the pace and accurate passing of the home side. ’Ensians have another home game next week against Northallerton who lie just above them in the League table. 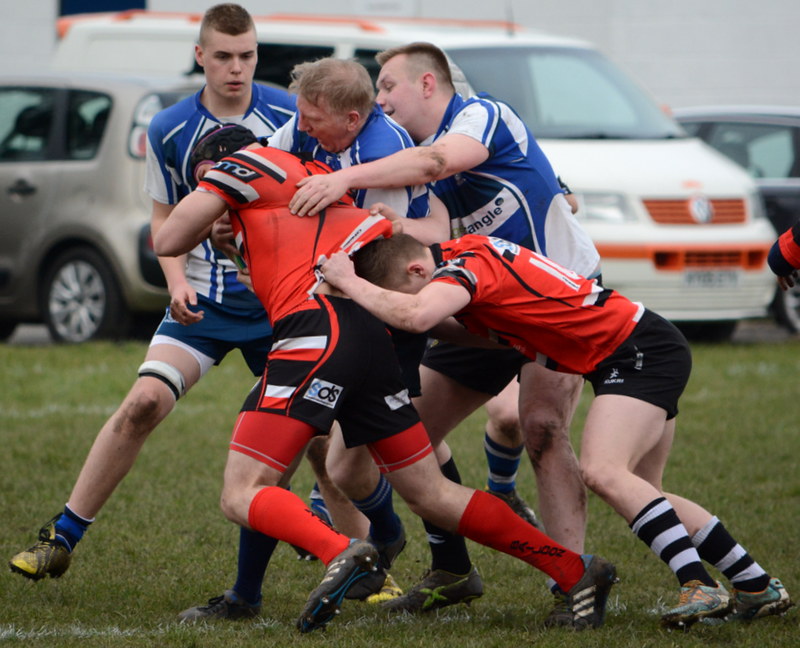 
With ensians not having a fixture, a pool game was arranged, with Baildon happy to travel to Otley. Baildon have struggled to put a 2nd team out all season, having only 5 or 6 players, so even though ensians had taken the merit table points for the fixtures, in the spirit of the game, it was played as a re- arranged merit table game even though ensians knew that the 20 + Baildon squad would be carrying more than a couple of first teamers & chances of winning would be very slim. Part of the Baildon squad was also made up of some old Otley team mates, with viscounts villain chris booth [ with his illegal scrummaging & own interpretation of most of the rules making him unpickable at ensians 2nds ] all round gentleman Jamie chapel, the now old / knackered “wheelybin”, who looked like one had fallen off after coming back from a bad knee injury, & the legend who is jock [ ill say no more ]. Ensians 2nds had another swap round, to get a team out, with toby baltrop having only his 3rd game of the season with fellow prop ray drake, who both had cracking games to say Baildon were changing there front row at regular intervals. Tempo had to pinch hooker john offer from the 1st team again, & as usual he worked hard all game for the 2nds covering the pitch like an extra backrow. The 2nd rows were the tenniswood twins [ like the krays, but not as hard ] with the the old badger paul tosney at 6, 2nd row dean bailey moving to 7, & bond gate boxer & salvation army bad boy dan ridgeway at 8. Jonny rah with a foot injury limped round at 9, while the ginger flash dave smith moved from the backrow & had a fantastic game at 10. With centres been short on the ground, front / second row ross nicols decided to fill the 12 shirt Jamie Roberts had left behind , while conner paley moved from full back to fill the 13 shirt. The pair of them played out of their skins against the quick experienced backline of Baildon. The wings were mick burts & mark elam , who are both still learning the game & james burgess moved to 15 from his wing & didn’t look out of place. Little eddy filled the bench like only eddy could do. The game started with ensians on the attack & looking good, & for the first 10 minutes had the lions share of the ball, but once Baildon got their hands on it & put some phases together, the pace & poor tackling allowed Baildon to score. With dean bailey leaping high in the lineouts, ensians were getting most of their own ball, but with the same calls been used, Baildon soon started to take them before they reached the jumper so john offer mixed it up to keep the opposition guessing. Any good ball came off the top for dave smith to get his backs going, with ross nicols taking the more direct route, while conner paley used his unique running style to find the gaps. Any ball kicked down field by Baildon was returned by james burgess who used his pace to make up the yards, but Baildon were up quick to shut him down, so both wingers needed to be in support to stop Baildon turning the ball over. Any loose ball was snapped up by Baildon & quick hands & poor tackling resulted in tries been scored at regular intervals for Baildon to be 31 – 0 up at half time. With players been frustrated at how the game was going, bret had one of his famous tenniswood tantrums, so came off to find his inner strength once more, which gave little eddy his chance to make his first start since suffering a couple of broken ribs 3 weeks earlier. [ he has now had more injuries than the six million dollar man ]. With ensians having 30 to 40 % of possession in the first half, the second half was about using that possession better & they started the second half in good form with eddy, dan ridgeway, matt t & toby baltrop making the hard yards, with dave smith, ross & conner causing the Baildon defence problems, but any mistakes were punished by Baildon who used their bench to good effect to keep their team fresh. Jonny & dave swapped positions which kept Baildon on their toes with johnies show & goes making room for ross to break the line, but Baildon got back well to defend, then attack themselves & score. Ensians deserved more & after some good work by the forwards, toby baltrop scored from a quick tap penalty for their only points. The game finished with Baildon scoring once again. On paper ensians never stood a chance in this game, but they had four or five chances on Baildons line to score but finished one. They had probally 40 % of possession but the one on one tackling continues to be poor which allows the opposition easy tries while ensians work very hard to score their own.