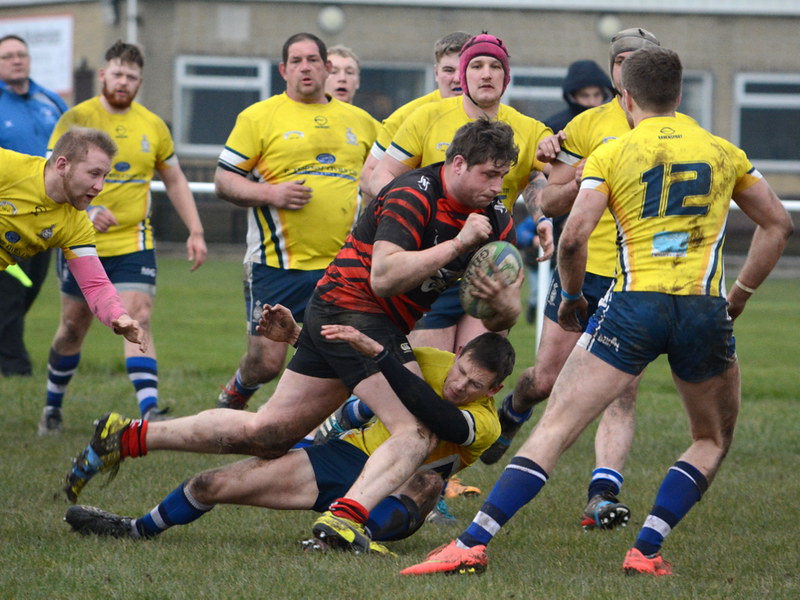 On a bitterly cold afternoon at Cookridge with a strong Arctic breeze blowing up the slope Ensians played down the slope in the first half of their re-arranged match against Mods.

Ensians started brightly the Keinhorst brothers coming close following a neat chip from Kristian. Most of the play was in the Home 22 and it was no surprise when after 15 minutes after Mods had forayed into the visitors’ half for the first time Olly Eaves and Ben Smith combined well to take the ball into the Home 22 and Sam Featherstone charged down a Mods’ clearance to score an unconverted try. The visitor’s attacks came thick and fast with fine work from Lee O’Donnell and Rob Arbuckle followed by a well worked unconverted try by Rob Lofthouse to make the score 10 points to nil after 20 minutes.

It was now Mod’s turn to attack and they battered the Visitor’s line for some minutes but good defence held them at bay followed by a fine touch kick from Kristian Keinhorst. After 28 minutes ‘Ensians took a lineout “against the head”; there was a lovely move along the line and Lee O’Donnell scored a great try converted by Kristian Keinhorst.

For the remainder of the half the visitors were on top for the most part with Chris Westland and William Prest conspicuous both in attack and defence.

The teams turned round with Ensians 17 points to nil in the lead but was this enough with Mods playing down the slope. The tipping point was 4 minutes into the half when ‘Ensians failed to ground the ball over the Mods’ line. Mods caught ‘Ensians napping with a quick 22 drop out and a speedy Mods back kicked ahead to score an opportunist converted try from 75 metres. The home team continued to attack strongly but after great defence by Michael Groves in the 14th minute the visitors broke the home defence for Luke Freer to score a bonus winning try converted by Kristian Keinhorst to make the score 24points to 7.

The home team then gained in confidence and two unconverted tries in the 22nd and 28th minutes made the score 24 points to 17 in favour of ‘Ensians. The last 12 minutes were nail biting for the Ensians supporters but their defence held and there were no further scores. Ensians deserved their hard earned victory but all credit to Mods they fought to the end.